“No man is an island” said  John Donne. But if he were, every healthy man or woman would be a lavish, tropical, densely populated island. Recently, I talked to a Knight wants you to help him explore that island. Interested? Confused? Read on…

The population of the human island is, of course microbes. Humans have microbes living on the skin, in the oral cavity, ear, and nose and gut.

There are more of these guys in/on our bodies than there are human cells. They are with us wherever we go. They are interacting with our systems. In fact, they are part of us. So understanding our microbes is essential to our understanding of ourselves.

As is the case with many natural microbiomes (the sum of microorganisms, their genomes and environmental interactions in an environment), many of species that live in the human gut cannot be cultured. Historically, this has made studying the human gut microbiome difficult. So relatively little detail is known about the composition of the human gut microflora, or how it responds to things like antibiotic treatments or overzealous disinfection.

But move over 20th Century microbiological techniques,  the 21st Century is here. Massive computing power and next generation sequencing are the proverbial knight in shining armor, riding in on a white charger to come to the rescue of human gut microbiome research.

The American Gut  is a crowdfunded open source, open access project, which aims to use these technologies to sequence and create a public database of genomes from human microflora. This is being billed as the “second genome project” (the first being the Human Genome Project), essential for our understanding of the symbiotic organism that consists of we humans and our microbial friends.

Sounds like a great project, doesn’t it? Well it gets better:  you can be a part of The American Gut project,  even (and especially) if you are not American. By taking part, you get insight into a part of yourself that you might not have even considered. It’s like a Self-Discovery retreat, only cheaper and much more useful.

Getting involved, entails donating some cash (starting at $99), and in return you get a kit in the mail that enables you to send a gut, mouth or skin sample (your choice!) for kits for DNA and 16S rRNA extraction and analysis. Not only are you funding the project, you also become part of the dataset, and you get to see how your microbiome looks in comparison to everyone else. Note: Apparently you can get your pets involved too, if you feel inclined. 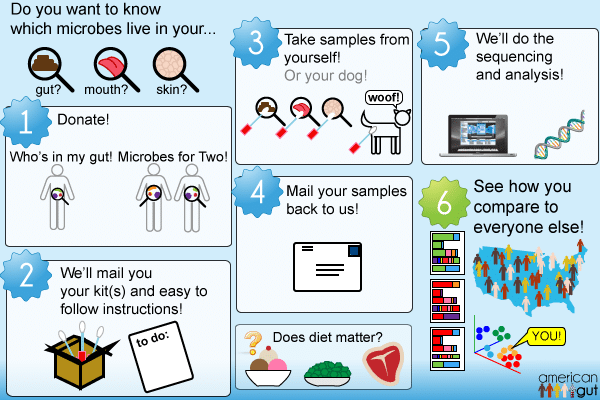 Phase I of The American Gut project has attracted more than 3500 participants so far. The project is now in Phase II and aims to reach 10 000 participants by beginning of April. Click here to get involved!

So what about the Knight?

I had a Bitesize chat with one of the leaders of the project, Prof. Rob Knight (see what I did there?). Here’s what he had to say.

BsB:  Can you describe your project in 140 characters?

Rob Knight: Bringing the Human Microbiome Project technologies to the public through crowdsourcing/crowdfunding.

BsB: …And may be more details that didn’t fit into this?

Rob Knight: It’s an independent ethics committee-approved project that involves many of the world’s leading microbiome scientists, and runs with a fully open-source, open-access model to enable a broad range of discoveries about the human microbiome.

BsB: It seems that the participation depends on buying a $99 kit. Is it possible send a sample without buying a kit?

Rob Knight: Yes, if you meet certain criteria (that are still being finalized).

BsB:  Why did you decide to have the project so open to the public – people can not only receive their data, but look at the other data as well?

Rob Knight:  It is critical for the field to develop an open resource that allows a wide range of discoveries by any scientist (or citizen-scientist), not just the researchers leading the project (as is typically the case). There are so many possibilities for what might affect the microbiome that having many eyes looking at the data is the best way forward.

BsB: What do you think is the bottleneck of the projects like the American Gut?

Rob Knight:  Funding, and obtaining detailed information from members of the general public without involvement of clinicians.

BsB:  Some genes of E.coli, the most studied microorganism and coincidentally a human gut inhabitant are still don’t have known function. Do you think that moving to metagenomics is trying to cycle before we can run?

Rob Knight:  No. Having environmentally annotated data may in fact provide a faster route. But this requires many environmental samples, not just one.

BsB: What would you like to achieve as a result of BsB article?

Rob Knight:  Get more samples — the project is still ongoing and the more participants we have, the more useful it will be.

So there you have it Bitesizers. The American gut needs you. As John Donne also said, “I am a little world made cunningly”. It’s time to find out just how amazing your little world is.

Please hop (or ride on your white charger) over the project’s crowdfunding page to get involved or for more information.