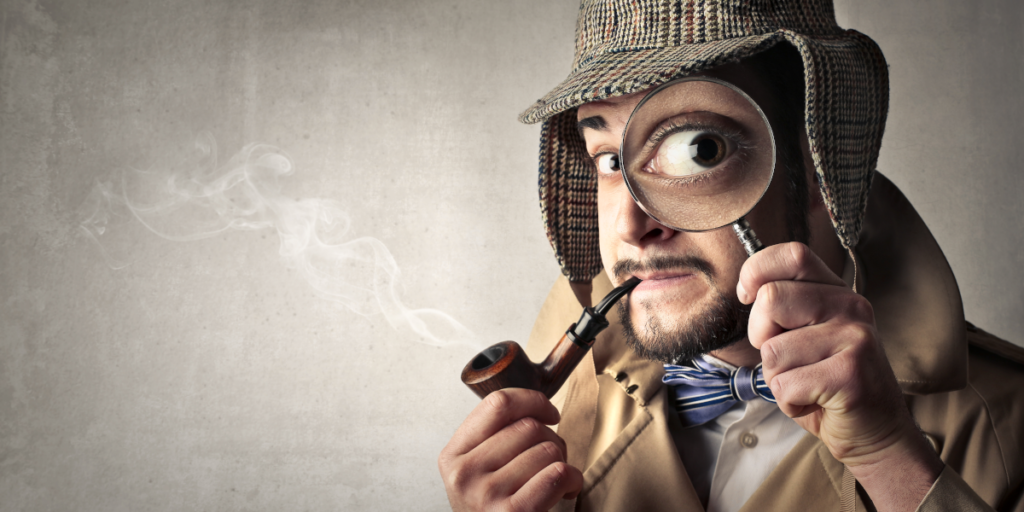 The threat of pandemic viruses can be mitigated by developing diagnostic tests that are rapidly implementable and field deployable. Two CRISPR-based strategies, DETECTR and SHERLOCK, have been developed recently that not only meet these criteria but offer unprecedented multiplexing capabilities.

This article discusses the theoretical basis of proposed and currently available viral diagnostics for educational purposes. It makes no recommendations on their real-world use.

How Do Current Diagnostic Tests Work?

There are two types of diagnostic tests for viral pathogens: those that target host antibodies produced in response to viral infection and those that target the virus’s genome. Antibody-based tests (also known as serological tests) require blood to be drawn from infected individuals several days after viral transmission to give their immune system enough time to produce IgG and IgM antibodies. Nucleic acid-based tests, on the other hand, only require the presence of the virus itself. Thus, these tests can detect viruses in patient samples (e.g., nasopharyngeal swabs for respiratory pathogens) even before symptom onset. This is why nucleic acid-based tests are used instead of antibody-based tests to combat viral spread. That said, antibody-tests are essential for identifying individuals who have already been infected during a pandemic and have since recovered, especially those who never developed symptoms.

The most common nucleic acid-based tests rely on real-time polymerase chain reaction (RT-PCR) to amplify reverse-transcribed viral RNA. The resulting PCR amplicons are then detected using standard RT-PCR detection methods. These tests are not without their shortcomings. Subpar sample handling can lead to false negatives, and amplification proceeds slower than isothermal amplification technologies such as loop-mediated amplication (LAMP). Because samples are usually shipped to a centralized laboratory for testing, RT-PCR tests can take over a day from collection to result. Laboratory RT-PCR tests also require trained technicians to carry out the protocol and interpret the results.

Point-of-care testing (i.e., testing in the field rather than a laboratory) is essential to fight the spread of highly contagious viruses, as it allows rapid identification of infected individuals to enable isolation and contact tracing. Although point-of-care RT-PCR diagnostics exist, they have been superseded by tests that use more rapid amplification technologies (e.g., LAMP) and smaller instruments. [1]

DETECTR and SHERLOCK leverage the nonspecific, collateral nuclease activity of the RNA-guided endonucleases Cas12a (previously known as Cpf1) and Cas13a, respectively, to enable rapid fluorescent detection of viral genomic material. These nucleases are distinguished by one major difference: Cas13a targets RNA and Cas12a targets DNA. However, unlike Cas9, these Cas enzymes exhibit nonspecific nuclease activity upon CRISPR RNA (crRNA)-mediated recognition of the target nucleic acid sequence. (Note here that the collateral activity of Cas12a/Cpf1 does not affect its gene-editing function because the former is only directed at single-stranded DNA.)

DETECTOR and SHERLOCK are illustrated step-by-step in Figure 1. First, viral genomic material (denoted in red) is extracted from patient samples and, for RNA viruses, reverse transcribed. The resulting DNA is then amplified using either recombinase polymerase amplification (RPA) or LAMP. Because Cas13a recognizes only RNA substrates, the amplified DNA must be transcribed back into RNA for SHERLOCK detection. Amplified nucleic acids bearing viral sequences are then detected using virus-specific crRNAs along with the appropriate CRISPR nuclease. Recognition of the viral sequence by Cas12a or Cas13a unleashes their collateral nuclease activity, resulting in the cleavage of a quenched fluorescent nucleic acid reporter. 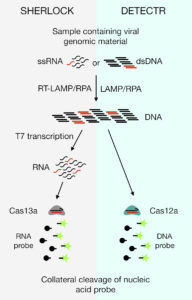 Advantages and Disadvantages of CRISPR Diagnostics

The most important advantage of CRISPR diagnostics is their multiplexing capability. Pathogen-specific crRNAs can be designed easily as long as unique genomic sequences have been identified. The full potential of CRISPR diagnostics may be realized in the form of multiplex diagnostic panels capable of discriminating between multiple viral pathogens in the same sample or different serotypes of the same virus. [4] In an update to the SHERLOCK method (SHERLOCKv2), Gootenberg et al. [5] screened over a dozen Cas12/Cas13 orthologs to identify those with unique collateral cleavage preferences. This feature is critical for multiplex applications because it allows multiple quenched fluorescent reporters to be used in the same reaction alongside multiple Cas enzymes.

Despite its advantages, CRISPR diagnostics are less sensitive than RT-PCR tests assuming samples are treated equally. [6] That said, samples are far less likely to degrade due in a point-of-care setting when compared to those shipped to a laboratory because they are tested immediately.

Although CRISPR diagnostics may not be ready for prime time yet, the specter of future pandemics leaves little room to pause on the development of these potentially life-saving technologies.

Interested in learning more about CRISPR? Check out our ultimate guide to CRISPR nucleases and our guides on multiplexing using CRISPR (part 1 and part 2).