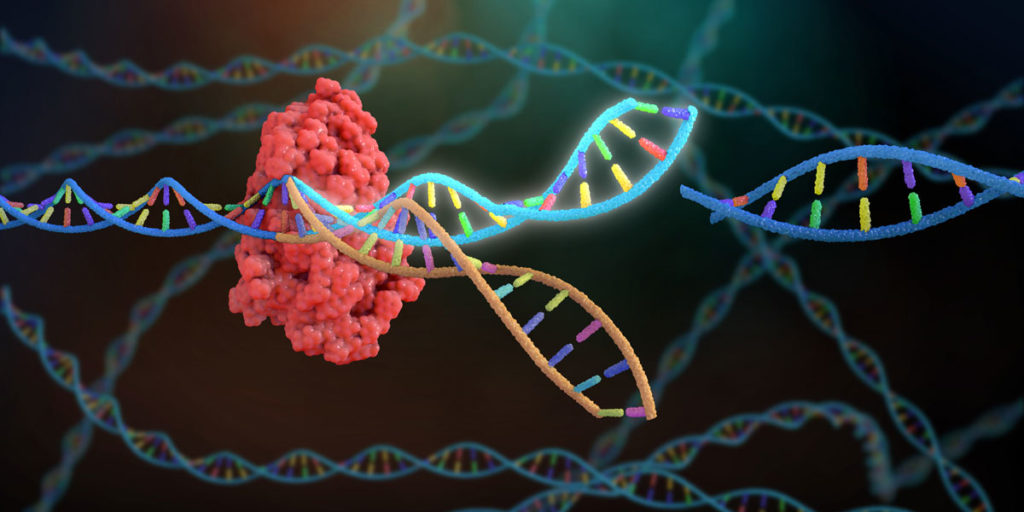 The CRISPR (Clustered, Regularly Interspaced, Short Palindromic Repeats)–Cas system evolved in microbes as a defense mechanism to protect against invasive phages. Today it forms the basis for the most exciting and fastest developing set of tools in biotechnology that give us the ability to edit any gene in any cellular organism or tissue. CRISPR-Cas promises to enable unprecedented advances in everything from health and diagnostics to agriculture and energy.

If you are exploring how to harness this technique in your research, this article will help you understand the basics to get you started. This article is the first in a series designed to carry you through your CRISPR journey, please check out our other articles here.

The CRISPR gene-editing process is driven by a complex consisting of a bacterially-derived nuclease (e.g. Cas9) and guide RNA (gRNA). The gRNA is a specific RNA sequence designed to recognize and direct the Cas nuclease to the target DNA region. The gRNA is made up of two parts: CRISPR RNA (crRNA) and trans-activating crRNA (tracrRNA).

The original CRISPR editing systems were driven by two-part gRNA complexes consisting of crRNA and tracrRNA. More recently, a single gRNA (sgRNA) approach, where the crRNA and the tracrRNA are combined into one RNA molecule, has become popular due to its increased ease and simplicity of use. The general schematic of the CRISPR gene-editing system can be seen in Figure 1.

While targeting of the nuclease is directed by the gRNA, a protospacer adjacent motif (PAM) of ~3-8 nucleotides must also be present downstream of the target site. Recognition of a PAM allows the nuclease to cleave the DNA, creating a double-strand break (DSB). The most commonly used nuclease, Cas9 derived from Streptococcus pyogenes, recognizes a PAM sequence of 5’-NGG-3’ (where ‘N’ is any nucleotide). However, the specific PAM required varies depending on the nuclease used, with nucleases isolated from different species requiring different PAMs. [1]

Once DSBs are generated, the native cellular DNA repair machinery attempts to repair the cut via non-homologous end-joining (NHEJ) or homology-directed repair (HDR).

NHEJ is the native cellular mechanism for repairing DSB. However, because NHEJ ligates the DNA ends back together without the use of a homologous DNA template, it is very error-prone. When these errors result in the insertion or deletion of nucleotides (indels), frameshift mutations often occur, leading to the generation of premature stop codons and a loss-of-function (LOF) mutation. This method, utilizing NHEJ, is the primary means by which CRISPR is used to disrupt (knockout) a gene.

In contrast, HDR is the mechanism by which CRISPR is employed to guide the replacement and expression of a specific genetic sequence (knock-in). Although the same basic CRISPR components are used, HDR utilizes a DNA donor template containing the new desired sequence flanked by regions of homology. When this donor template is introduced along with the CRISPR components, the cells will use this template to repair the cut DNA via homologous recombination. The result is the incorporation of the new sequence into the target gene.

Getting Started with CRISPR Gene Editing

A typical CRISPR gene-editing workflow can be broken into the following key steps:

Careful design of the gRNA is critical to the success of your CRISPR experiment. A poorly designed gRNA may fail to generate an effective knockout or it may result in unwanted off-target effects by binding other regions of genomic DNA. Here are a few tips for designing effective gRNA:

Designing your gRNAs may seem complex, but online resources like the Sigma-Aldrich® CRISPR design tools, make the process straightforward.

Delivering CRISPR Into Your Cells

There are multiple ways to deliver CRISPR nucleases (e.g., Cas9) and gRNAs into cells, including transient transfection (DNA, RNA, or RNP), lentiviral transduction, PiggyBac integration, and ribonucleoprotein (RNP) transfection. The primary feature that distinguishes these methods is whether they express your CRISPR components transiently or stably.

Transient methods work best for individual gene knockouts as they are associated with fewer off-target effects, while stable gRNA integration is needed for large-scale screening applications to enable recovery and quantification at the end of the screening process.

Certain cell types, such as T cells, are hard to transfect with a plasmid vector, either because the viral vector elicits an immune response or the plasmid delivery ends up killing the target cell. In such cases, a ribonucleoprotein (RNP) system is often used. Here, the RNP, consisting of purified Cas9 protein complexed with the gRNA, is assembled in vitro and delivered directly into the target cells by electroporation or transfection. RNP offers faster gene editing since the functional nuclease is immediately available in the cell. RNP complexes are quickly degraded by cellular proteases making the editing activity short-lived. The reduced time of available RNP in the cells also reduces off-target effects. Overall, RNP provides an effective and straightforward method for achieving high levels of gene knockouts with efficiency rates reaching 70-80%. [5]

To select those cells that have been successfully transduced, selection marker genes are often incorporated into the vector that expresses the CRISPR components.

The two most common selection markers are:

Selection markers are not limited to vector-mediated CRISPR delivery methods. Fluorophore-tagged Cas9 RNP complexes, such as MISSION™ Cas9-GFP Fusion Proteins, as well as fluorophore-tagged gRNAs are available. As discussed above, a benefit of using RNP complexes is that they are quickly removed from the cell. Using tagged RNP complexes enables you to observe this clearance of the nuclease-gRNA complex in the transfected cell in real-time.

An important consideration when choosing your selection marker is if your chosen cell line includes any pre-existing antibiotic resistance or fluorescent tags that would interfere with the selection.

Knowing how you will measure the success of your CRISPR gene-editing experiment is critical. There are many options for doing so, including Sanger sequencing, mismatch detection assays, next-generation sequencing (NGS), phenotypic assessment, and measuring mRNA and protein levels for your targeted gene. These methods differ in their sensitivity, scalability, resolution, and cost. [1]

For example, although NGS offers extremely high sensitivity and resolution, it is costly and requires significant technical expertise to carry out. Mismatch detection, on the other hand, is easy to perform but lacks the sensitivity of Sanger sequencing and NGS.

Determining the presence of an indel is often considered best practice. However, simply measuring the changes made to the genome is not sufficient to determine if they have disrupted gene function and created a gene knockout that causes a phenotypic response. It is also important to measure protein levels, ideally using a well-validated antibody.

The ploidy of your chosen cell line is another important consideration when using CRISPR. This is vital information because it dictates the number of mutations needed to obtain a homozygous LOF mutant. Many transformed or cancer cell lines possess more complex genomic configurations (e.g., triploid), making them more difficult substrates for complete gene knockout. In contrast, homozygous mutants can be obtained from haploid cells with relative ease.

Choosing the right controls for your gene-editing experiment is essential in determining the validity of your results and to facilitate troubleshooting, when necessary.

Many different types of controls can be used with CRISPR:

Additional controls can be used to simplify the interpretation of your CRISPR gene-editing experiment. For example:

CRISPR-driven gene editing is one of the most powerful tools available today. While the number of considerations and design choices required may seem daunting, you’ll find that a modest degree of planning will go a long way in improving the likelihood of success in your experiments.

This article is intended only as an introduction to the basic concepts and considerations of conducting a CRISPR experiment. We encourage you to explore the additional educational resources listed below.

And you should also consider the following Sigma-Aldrich® tools: