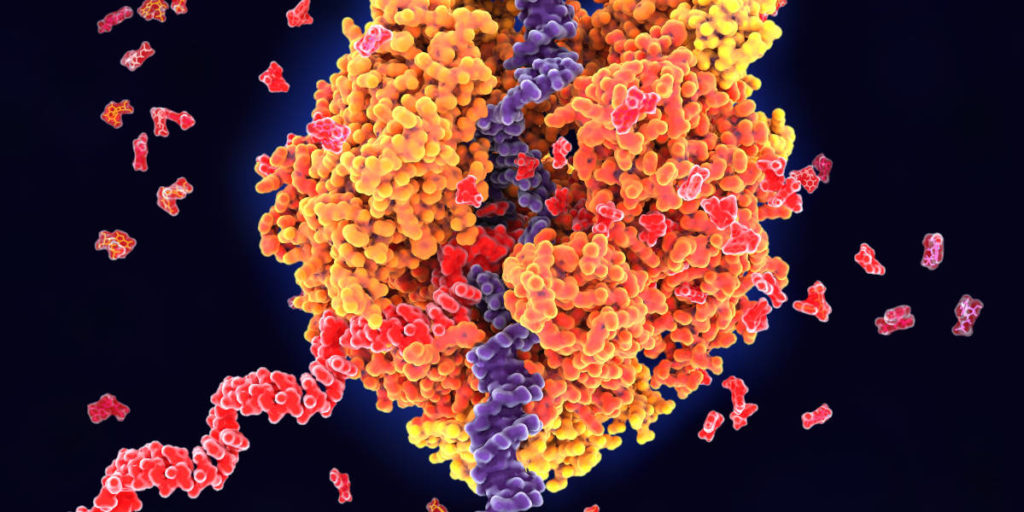 CRISPR/Cas9 gene editing has become an increasingly popular solution for introducing permanent loss-of-function (LOF) mutations by generating double-strand breaks at targeted genomic loci, after which endogenous cellular machinery repairs the cleaved DNA. LOF stems from the introduction of frameshift mutations during this repair process. The adaptation of the CRISPR/Cas9 system expands the application of this technology, allowing CRISPR-mediated gene activation (CRISPRa) and repression (CRISPRi) without altering the DNA.

How CRISPRa and CRISPRi Work

In contrast to regular CRISPR/Cas9 gene editing, CRISPRa and CRISPRi employ a catalytically inactive form of Cas9 (dCas9). This Cas9 variant possesses point mutations in two amino acid residues, D10A and H840A, that deactivate the RuvC and HNH nuclease domains of Cas9, respectively. [1] Although dCas9 cannot cut DNA, it is still precisely recruited to the target DNA by the guide RNA (gRNA). Synthetic biologists have taken advantage of this property of dCas9 by constructing dCas9-based tools that expand the functionality of the CRISPR/Cas9 system.

Considerations for Designing a CRISPRa or CRISPRi Experiment

How to design the gRNA

The design of gRNAs differs between CRISPRa or CRISPRi and CRISPR KO, where efficient gRNAs target early exons in protein-coding genes to prevent the expression of a truncated protein that may retain some function.  A screen of all possible gRNAs surrounding the transcriptional start site (TSS) of 49 genes enabled the identification of the optimal targeting windows for both CRISPRi and CRISPRa. [6]

Consistent with its dual mechanism of action, CRISPRi using the dCas9-KRAB repressor was efficient for gRNAs falling in a window spanning from -50 to +300 base pairs (bp) from each TSS, with the best-performing gRNAs targeting the first 100 bp downstream of the TSS. [6] For CRISPRa, the window spanning -400 to -50 bp from an individual TSS was determined to be the optimal targeting region. [6] This window applies to all CRISPRa effectors, including the SAM system. [5]

Also, the chromatin environment surrounding the targeted genomic region can limit the nuclease accessing the site. [7]

Identifying highly active gRNAs is vital for constructing genome-scale CRISPRi and CRISPRa libraries. Such libraries include 3-10 gRNAs per gene to ensure that screening hits are not because of inadequate gRNA efficacy. [8, 9] Pooled gRNA screens offer a robust and straightforward method for clarifying how various factors influence gRNA activity, as thousands of gRNAs can be tested with relatively minimal effort. [10]

Pooled gRNA screens also inform gRNA prediction algorithms. Observations, such as the effects of gRNA sequence, position, and accessibility, have enabled the iterative and comprehensive identification of highly active gRNAs. [11, 12] This has led to the development of highly active and compact (i.e., fewer gRNAs per gene) gRNA libraries for CRISPRi and CRISPRa. [9] Ultimately, compact CRISPR libraries reduce the number of cells needed to perform genome-scale screens.

The mechanisms of CRISPRi and CRISPRa differ from other gene perturbation technologies, such as RNA interference (RNAi) and CRISPR KO (Figure 2). These differences offer advantages and challenges that should be taken into consideration when selecting which technology to implement.

Figure 2. Mechanism of CRISPRa and CRISPRi compared to RNAi and CRISPR KO.

The mechanism of CRISPRi differs from other gene perturbation technologies, such as RNA interference (RNAi). RNAi inhibits gene expression by utilizing a conserved RNA processing pathway to degrade targeted mRNAs in the cytoplasm. The cytoplasmic location of the endogenous machinery co-opted by RNAi prevents it from efficiently targeting nuclear RNA, such as ncRNA. [13] RNAi can also induce off-target effects by displacing endogenous small RNAs (e.g., microRNAs) from RISC. [14] CRISPRi avoids these unwanted effects because all of the components are from exogenous sources. Finally, CRISPRi outperforms RNAi in large-scale screening applications by generating more robust phenotypes with fewer off-target effects. [6]

Although CRISPR gene editing is a powerful method for generating LOF mutants, several disadvantages preclude its use in all LOF studies. The double-strand breaks caused by Cas9 can induce cytotoxicity and genomic instability, particularly in cancer cell lines. [15,16] Also, roughly one-third of indels will not cause the necessary frameshift to knock out targeted genes. Non-coding regions (e.g., long non-coding RNAs) can be difficult to target by Cas9 because they require edits at two sites to create a sufficiently large mutation to generate LOF. [17] CRISPR KO is also a suboptimal solution for investigating the effects of genes that are essential for cell survival beyond their identification in genome-wide screens as cells can tolerate a partial knockdown, but not a complete knockout, of such genes. [10] By not cutting DNA, CRISPRi circumvents the disadvantages of CRISPR KO, making it a superior choice for perturbation of non-coding genes or applications that call for a reversible or titratable solution.

CRISPRa offers a few advantages over existing gain-of-function (GOF) techniques such as open reading frame (ORF) overexpression. Overexpression of ORFs commonly utilizes strong viral promoters (e.g., CMV) that result in supraphysiological expression levels. Because CRISPRa is targeted to endogenous gene promoters, supraphysiological transcription is challenging to achieve, making CRISPRa better suited to applications that favor the physiological or near-physiological expression of targeted genes. [18] This also means CRISPRa is more likely to upregulate the most relevant splice variants of the targeted gene, particularly in cases when they are unknown. [10] Finally, genome-scale ORF libraries are more difficult to synthesize than equally-scaled CRISPRa libraries.

CRISPRi and CRISPRa add to the existing suite of genome engineering technologies by offering complementary insights into complex biological processes. Unlike CRISPR KO, which provides binary and permanent outcomes, CRISPRa and CRISPRi can be used to reversibly titrate gene expression levels within a broad, dynamic range (up to and exceeding 1,000-fold). [2] Also, large-scale LOF and GOF screens can identify unique, yet functionally related, hits under otherwise identical screening parameters. The identification of SPI1 (by CRISPRa) and GATA1 (by CRISPRi) as regulators of cell growth in the K562 human myeloid leukemia cell line highlights the usefulness of this parallel use of CRISPRi and CRISPRa. [6] Both manipulations increased cell growth in K562 cells, confirming SPI1’s known inhibitory effects on GATA1 activity. [19] Therefore, while individual CRISPR screens are independently powerful tools, when used in combination, CRISPRi, CRISPRa, and traditional CRISPR KO screens offer robust validation and strengthen findings, as well as provide a more detailed understanding of gene pathways.

How to Perform a CRISPRa or CRISPRi Experiment

Below is a brief overview of these steps; a more thorough protocol is available here.

Generation of a Helper Cell Line

Transient transfection of all components is sufficient for cell lines that are efficiently transfected (e.g., HEK293 cells), while lentiviral transduction provides more consistent and robust results across a variety of cell lines. For large-scale screening applications, creating a stable “helper” cell line that expresses dCas9-KRAB or the CRISPR SAM complex at the outset permits rapid validation at the end of the screening process. Sigma-Aldrich® lentiviral vectors are available for helper cell line generation that are optimized to improve functional viral titers.

Lentiviral transduction of gRNA followed by antibiotic selection ensures consistent and robust activation or repression for both small and large-scale applications. Lentiviral delivery is essential for pooled CRISPR screens because genomically-integrated gRNA sequences serve as barcodes for later deconvolution. As such, pooled CRISPR libraries should be delivered at a low (<0.7) multiplicity of infection to ensure each cell receives only a single CRISPR copy. [8]

Applications of CRISPRa and CRISPRi

CRISPRa and CRISPRi are particularly amenable to genome- and subgenome-scale screening applications, including identifying drug targets [20] and cellular factors that mediate drug resistance, [5] due to the relative ease with which gRNA libraries can be synthesized, cloned, and packaged in lentivirus. [6, 5] Arrayed screening is also possible with CRISPRa and CRISPRi. Two SigmaAldrich® webinars provide more insight into CRISPR screening including the benefits of a whole-genome gain-of-function screening and the differences between CRISPRa, CRISPRi and CRISPR KO screens.

Although pooled CRISPR screening has many advantages over arrayed screening, it is typically limited to studying crude phenotypes such as cell growth and viability. By contrast, virtually any type of analysis can be done in an arrayed screen because CRISPR perturbations occur in individual wells of microtiter plates. The advent of single-cell RNA sequencing, however, provided a high-content transcriptomic analysis that could be integrated into pooled CRISPR screen workflows. This is because each CRISPR perturbation, including its transcriptomic and phenotypic effects, is confined to an individual cell. [21] Thus, as long as individual cells can be separated, CRISPR perturbations can be linked to a transcriptomic readout as well as a phenotypic outcome. CRISPR single-cell screening in partnership with 10x Genomics is now available from the Sigma-Aldrich® portfolio.

CRISPRa can be used to study non-coding genes [6] or individual transcript variants of a gene, [22] although well-annotated genomes are crucial for these applications. CRISPRi is also able to distinguish between different transcript variants, unlike CRISPR KO and RNAi, as long as the TSS for each variant is mapped.

CRISPRa and CRISPRi are potent tools for modulating gene expression in a reversible and titratable manner. These technologies use dCas9 to act as synthetic transcription factors by recruiting endogenous transcription activator and repressor complexes to gene promoters and enhancers, resulting in up- or downregulated gene transcription. CRISPRi achieves LOF phenotypes without the limitations of RNAi and CRISPR KO, and CRISPRa provides a scalable solution for large-scale overexpression screens. Although CRISPRa and CRISPRi usually rely on delivery by lentivirus, these technologies offer new possibilities for genome engineering. CRISPRi and CRISPRa can be used individually to target areas of the genome that are inaccessible by other gene perturbation technologies (e.g., non-coding regions) or in conjunction to uncover gene-regulatory networks underlying discrete phenotypes. Finally, pooled CRISPRi and CRISPRa screening can be paired with single-cell RNA-seq to enable high-dimensional characterization of CRISPR perturbations.

And you should also consider the following SigmaAldrich® tools: