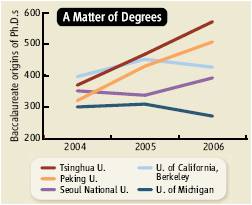 Did you know that it is more likely that the next graduate student you meet in the US is from one of two Chinese alma mater’s than from any other U.S. university, including UC Berkeley, Cornell University, and the University of Michigan, Ann Arbor? That’s a striking figure, the topic of a tiny comment in last week’s Science: Top Ph.D. Feeder Schools Are Now Chinese.

While I may not have known that statistic however, it’s not surprising, as any past or current graduate student will tell you. There are a lot of non-American’s in American grad schools. Props to those non-Americans – they worked hard and have earned it.

At the same time, as I said, that statistic is striking. It really makes me wonder why, exactly, is a Ph.D. looked upon so much more highly in other countries than the U.S., yet the U.S. somehow maintains the reputation of its universities. How can American universities maintain themselves at all as major research institutions in a country indifferent or even hostile to higher learning?

Not that I blame American students for the lesser interest in graduate school – it’s a lot hard work without much likelihood of appreciable pay afterwards. There isn’t much incentive for individuals looking out for No. 1, and in search of the American Dream. The only Americans going into academic research are those interested in esoteric careers and intellectual fulfillment.

People from the developing world however, view advanced education of the sort obtained with a Ph.D. as more of a means to the American Dream than Americans do, I think.

I also think that the education level of a population is a strong indicator of its long-term posterity. This is why I am concerned, as an American. The level of interest in advanced degrees may very well be a bellwether for decades to come, when the current generation of American undergraduates become its leaders.

Or maybe I’m over-reacting, overvaluing the Ph.D. sheepskin on my wall and the walls of my colleagues. What say you?