Very often plasmid maps, especially historical ones that are hand-drawn by a long-forgotten PhD student, are a puzzle. What are these arrows and boxes? Where do I start? Don’t worry, we have a crash course introduction into deciphering plasmid maps.

Familiarizing Yourself with Your Plasmid of Interest

Let’s start with a classic plasmid: pBR3221. It is often used as a backbone for derivative vectors because it has all features needed for a successful cloning (Figure 1). As you see from the map center, the size of the linearized plasmid is 4361 base pairs. Before you start working with any plasmid, it is advisable to linearize it by cutting with a unique restriction enzyme to check that the advertised size is roughly the same as expected. 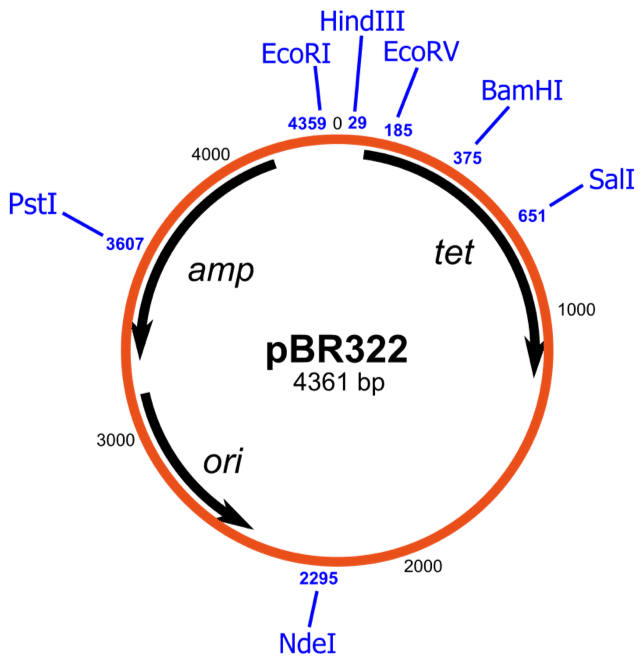 The black arrows show the direction of transcription, which is essential for cloning. If you clone your gene of interest in a middle of another gene, make sure that both of them are transcribed in the same direction. Otherwise, the native promoter can interfere with your gene expression.

What Does “Ori” Mean?

In gene sequence databases, such Entrez-PubMed, plasmid sequences are diagrammed as linear sequences starting from the ori. “Ori” means the origin of plasmid replication. Whatever you do, don’t change it! Once a plasmid is unable to replicate, it is useless.

The other thing to remember about ori is that plasmids with the same origin are often incompatible. This means that you will not be able to maintain two pBR323- derived vectors in one cell even if they have genes for different antibiotic resistances on them. The pBR322 ori is also used in pUC18, which is the second most common backbone used in eukaryotic vectors.

Where Can I Find the Restriction Sites?

Restriction sites for corresponding enzymes are shown as vertical lines with the position of the starting nucleotides. The sites should be unique, but it pays to check, as derivative vectors often contain additional forgotten sequences.

What About Antibiotic Resistance Genes?

pBR322 has two antibiotic resistance genes: tet (tetracycline resistance) and amp (ampicillin resistance). These genes encode an efflux pump (tetR) and beta-lactamase (ampR) to excrete tetracycline and ampicillin from the cell, respectively. Tet and amp are read in different directions.

When using restriction enzyme sites to clone your gene of interest into your plasmid, be careful to look at which sites fall within your antibiotic resistance gene. For instance, PvuI cuts in the middle of AmpR, and BamHI cuts in the middle of TetR. And, as we all know, the disruption in a gene will lead to inactivation of gene function – in this case, antibiotic resistance.

How Does Replication Start and Stop?

In addition to genes, plasmids often include transcription promoters and terminators derived from E.coli phages. Promoters from phages SP6 and T7 are often used for in vitro RNA amplification. They require phage polymerases and are therefore inactive in vivo.

Below is a map of pTLNX , a Xenopus oocyte expression vector (Figure 2). In addition to the familiar pBR322 origin and antibiotic resistance genes AmpR and CmR (chloramphenicol resistance), there are also SP6 and lacUV promoters present. Downstream from SP6 promoter, the rrnBT2 terminator allows efficient termination of genes cloned into the multiple cloning site2 (Figure 2).

The pTLNX vector also has a gene for plasmid selection (ccdB), along with virus SV40 nuclear localization signal and Xenopus globine 3’ UTR, that allows for high expression levels of cloned genes.

Homemade maps are often unreliable as they omit “unimportant” features that may be critical for your experiment. If you need a vector map, it’s better to use known map repositories such as Addgene, Entrez-PubMed, and sites of companies that sell your vector of interest. 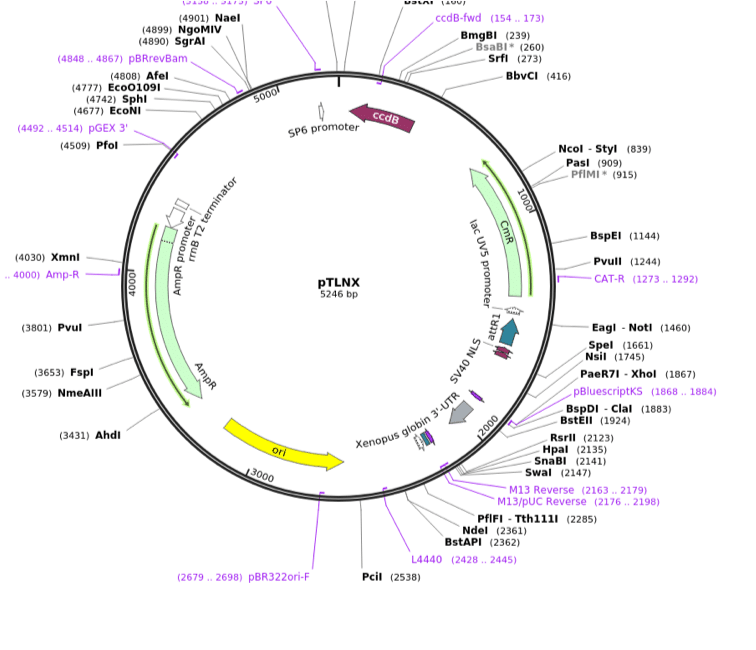 Plasmid maps are always evolving, so it is likely that your contributions will be left for your future colleagues. Please include as many details as possible in your map! Happy map reading and drawing.