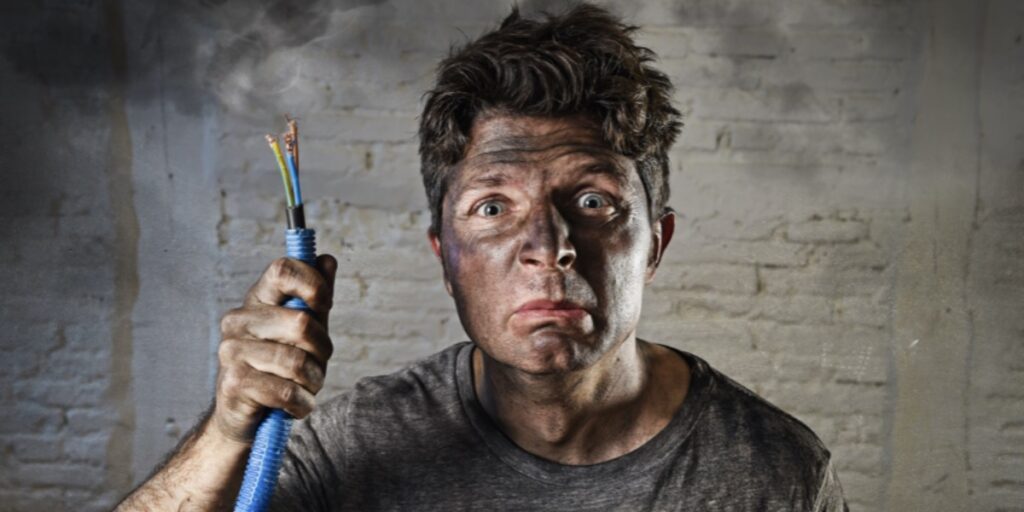 Choosing whether to run your SDS-PAGE at either constant current, voltage, or power depends on your samples and equipment availability. If you need sharper bands or set run times, setting constant current might be best. If power pack availability is an issue, constant voltage allows multiple chambers to be run simultaneously from one power pack. If safety is your biggest concern, then constant power is the best option.

In labs across the world, scientists are racking their brains to decide whether to run gels at constant current or voltage in SDS-PAGE. What’s the difference, you ask? And wait there’s a third option too? Let’s open this can of worms together and discuss the science so you can make an informed decision.

An electric current can separate ions and charged macromolecules through a solid gel matrix in a method known as electrophoresis. We use this to separate DNA, RNA, and proteins according to size, charge, and structure.

The average molecular weight of one amino acid is ~110 Da, while one DNA/RNA base is around ~330-340 Da. This weight is doubled for double-stranded DNA.

Because of this, DNA molecules are often thousands of kilodaltons in size, making them larger than most monomeric proteins.

Agarose, which contains larger pores in the gel matrix, is typically used to separate nucleic acids. Acrylamide, which contains smaller pores, is usually used to separate proteins by native or sodium dodecyl sulfate-polyacrylamide gel electrophoresis (SDS-PAGE). Check out this article to learn more about the differences between these two gel systems.

OK, now we’ve got the basics out of the way – onto the nitty-gritty!

The source of this electrophoresis controversy is the age-old western blotting debate of whether constant current, voltage, or power is best for PAGE. To address this question, we first need to consider the differences between the methods.

Most modern power packs allow users to control each of these three electrophoresis modes so that one electrical parameter can be set while the other two fluctuate. To get a more solid understanding of gel electrophoresis, we should cover Ohm’s Law and the Second Law of electrophoresis.

Get ready for some fun equations, folks!

Voltage (V; in volts) is the driving force during PAGE separation of protein samples. When voltage is applied, the result is a current flow (I; in milliamps), which has an intrinsic resistance (R; in ohms) as it passes through the gel. Resistance is a measure of how easily ions in the buffer system allow charge to “flow” through the gel.

As the electrolytes in the buffer are used up during electrophoresis, resistance will naturally increase.

Ohm’s Law describes the relationship between these three parameters:

When you set your desired voltage, current, or power on the power pack, the selected setting determines the resistance. Importantly, resistance is influenced by other factors, including the ionic strength of the buffer, the conductivity of the gel, and temperature.

On the other hand, the Second Law states that power (P; in watts), a measure of the amount of heat produced, is equal to the product of current and voltage:

If you rearrange Ohm’s Law, you will see that:

If you’ve ever performed PAGE or a western blot transfer, you may have noticed that the chamber can get pretty warm. I’ve even heard rumors of smoking and boiling electrophoresis chambers. None of them was mine, I swear!

Have you ever wondered why this happens? Well, it’s because electrophoresis produces heat in a process known as Joule heating or Ohmic heating.

The generated heat is influenced by the conductivity of the buffer system used, the total resistance within the system, and the strength of the applied electrical field.

If you want to increase your chances of having a decent western blot after all of those never-ending TBST washes, it is essential to consider how much heat may be generated during your electrophoresis run.

Heat can be a double-edged sword for PAGE. Some additional heat can help denature proteins that haven’t been fully denatured during sample prep. Still, too much heat can make gels swell, causing samples to run unevenly and resulting in the dreaded “smiling” gel.

Even worse, excessive Joule heating can render your gel useless for western blotting because high temperatures can denature your protein(s) of interest, making them undetectable and producing distorted and smeary bands. Tragedy!

Setting a constant current means that your samples will migrate at a constant rate with the voltage and power increasing as resistance increases, leading to more heat production. If resistance increases enough, you will have to deal with longer run times which, in turn, could lead to other problems with the system (e.g. a buffer leak, or a damaged lead or electrode).

If this happens, the system may increase the power and voltage even more, leading to further heat generation and a vicious cycle.

In extreme cases, the system can get hot enough to boil, scorch, or burn some of the equipment. As well as the safety concern, there is also the small matter of your (potentially) ruined gel.

I would hate to have to explain this to my supervisor and/or building manager in the worst-case scenario!

To combat overheating, some people perform electrophoresis with an ice pack, on ice, or even in the fridge.

If you run your PAGE or western transfer in the fridge, you should keep the power pack at room temperature and only have the leads going into the fridge. Otherwise, you run the risk of ruining the electronics of the power pack due to condensation.

You can use my genius hack of sealing the fridge door with tape for some extra security. Don’t say I’m not nice to you!

Be careful not to cool your electrophoresis chamber too much. Because resistance increases as temperature decreases, you could end up with super long run times.

On the plus side, a constant current allows for a constant migration rate, so you can run your SDS-PAGE gel for a specific length of time, leaving you free to carry on with other work or go for tea/coffee, lunch, and/or nap if you fancy.

You can come back after the required time to carry on with the gel staining or protein transfer.

This also allows for shorter run times, resulting in sharper bands. If you’re going to use constant current for electrophoresis, you should start your run at 100–120 milliamps (mA) and keep an eye on it.

Running multiple chambers on the same power pack using constant current can be problematic because differences between the chambers (e.g. gel composition and buffers) can influence the current received in each chamber. This means that each chamber gets an inconsistent current.

Because gel composition affects the rate of sample migration, it’s also a good idea to only run gels of the same percentage in the same tank. Otherwise, one gel could run faster than the other, requiring you to take one of the gels out and leave the other to run fully. Too stressful for me!

If you decide to use constant voltage, the current and power will decrease as resistance increases. This lowers the amount of heat produced, making this a safer option.

However, because resistance increases, the sample migration rate through the gel will slow down, leading to longer run times, which often results in diffuse bands.

If there is a problem resulting from a big increase in resistance, the current and power will fall because the voltage has been set.

The greatest advantage here is that even if there is an equipment failure, the worst that can happen is the resistance increases to a level that can’t be compensated for by the power supply, causing it to shut off.

But if you monitor your electrophoresis run regularly (as you should), you can simply turn it back on and hope your gel hasn’t been negatively affected. Or you can just re-run the gel.

If you work in a lab where the number of available (functional) power packs are in short supply, you could attach several electrophoresis chambers to one power pack while keeping the setting the same as for one run.

This is because multiple electrophoresis units supplied by the same power pack will receive precisely the same voltage. You should still avoid using gels of different percentages in one tank though.

As a rule of thumb, most vertical electrophoresis chambers suggest that you run gels at a constant voltage of 5–15 V/cm of gel for standard 1-mm-thick PAGE gels.

So, while you may have longer run times, heat production remains constant, and you won’t run the risk of boiling your gel and ruining your samples. If the current somehow decreases because of a system issue, the power supply increases the voltage to offset this.

So again, you need to keep a watchful eye on your electrophoresis run and be prepared for extended run times and potentially diffuse bands.

On the plus side, you won’t boil anything (except maybe your nerves and/or patience), your power supply won’t spontaneously shut off, and you won’t have to report any burnt or scorched lab equipment to anyone.

Depending on your temperament, time restraints, and patience, this could be the best or worst of both worlds.

Constant Current or Voltage: Which is Better?

As usual in biology, there is no one-size-fits-all answer. Each of these electrophoresis modes has its own pros and cons, so you should optimize your electrophoresis protocol for your specific protein(s). I’ve summarized the pros and cons for each mode in a handy table, along with tips and recommended run setting to help you start optimizing (Table 1).

Table 1: Pros and cons of each electrophoresis mode

Although optimizing may be frustrating and time-consuming, it will be worth it to get that perfect western blot and a protocol that works every time.

Did this article help you decide between constant current or voltage in SDS-PAGE?  Leave a comment below!