I recently read an article on WIRED about an optics experiment cooked up by the scientists at NIST to allow office workers to test for potentially dangerous infrared (IR) leakage by inexpensive laser pointers. Like many who read it, I wasted no time attempting to replicate their experiment on my desk. (I’m not sure why I was doing this – my lab does fluorescent-based, single-molecule biochemistry, and has an entire room full of equipment one could use to evaluate a laser, but I guess I was caught up in the moment.) About that time, my friendly neighborhood physicist walked into the lab, asked what I was doing, and commented “Why don’t you just use your IR thermometer?”

Background
Before I read the WIRED article and the linked NIST Technical Note, I have to admit that I was blissfully unaware of how laser pointers worked. In simple terms, laser pointers (other than most red ones) utilize an infrared laser diode to produce infrared light, which is then manipulated by crystals to adjust its wavelength to the desired visible wavelengths, such as green, blue, violet, and orange-red (read more here). The problem is that the conversion of the original infrared light into visible light isn’t 100% efficient, and the shoddier the craftsmanship of the laser, the less efficient it likely is, and the less likely the device contains an IR filter to remove the leftover IR wavelengths. In the NIST Technical Note, the authors found that their cheap green laser pointer was outputting 20 mW of total power, with over 90% of that power still in the IR spectrum.  To put this in prospective, with this level of power output, protective eyewear must be worn while the laser is in use in order to be in compliance with our laser safety protocols and OSHA.

The dangers of IR
So why be concerned by the IR leakage? The NIST authors state it best:

“Intense infrared radiation poses a grave danger to humans and animals because, being invisible, it does not activate the blink reflex. Thus, a considerable dose of infrared radiation can enter the eye and cause retinal damage, imperceptible to the victim before serious damage occurs… ”

In addition to a conference room setting, where both the visible and the IR wavelengths are reflected off the screen,

“… many windows in modern commercial and industrial buildings have infrared reflective coatings to reduce solar heating of the interior. If a green laser is directed on such a window, the green light will pass through it, but any infrared emitted by the GLP will be reflected. This is a substantial hazard. Any differential reflection of infrared vs. green light poses such hazards, since the green light that travels with the infrared light may not be sufficiently intense to activate the blink reflex.”

The NIST IR detector
In the NIST Technical Note, the authors create a low-tech apparatus using a CD as a diffraction grating to separate the visible and infrared wavelengths being emitted by the laser pointer. They then take pictures of the diffraction pattern with both an IR sensitive and IR filtered cameras and compare the two pictures to reveal the contaminating IR wavelengths. While I was attempting to replicate their approach with the random contents of my desk, my colleague (and the aforementioned friendly neighborhood physicist) Dr. Chris Dombrowski started questioning what I was up to.

Using an IR Thermometer as an IR detector
In the past, I’ve written about the utility of IR thermometers in the laboratory, and consequently I have one handy at my bench. Once I described what I was doing to Chris, he pointed out that I didn’t need to separate the various wavelengths of light (possibly) being emitted by my laser pointer, as long as I had a sensor that was only responsive to IR wavelengths, and that the IR thermometer should fit that bill. Sure enough, when I shined my cheap green laser off the detector of my IR thermometer, the thermometer went nuts, registering temperatures as high as 85°C, while no external components of the laser pointer were warm to the touch.

We headed off to the bat cave (fluorescent microscope room) to use some more sophisticated equipment to verify what we found. Similar to the NIST results, my cheap green laser pointer was outputting approximately 15 mW of total power, with 10 mW in the IR spectrum. A survey of the lab turned up a second, more expensive green laser pointer that was outputting approximately 0.5 mW of IR radiation. (We believe this laser pointer has better alignment of the crystals then the cheap laser pointer, but still lacks a protective IR filter in the design.) When we tested the effect of the second laser pointer on my IR thermometer, we found a shift of only a couple of degrees when the laser was on. In addition, Chris used optical filters to show that filtering out the green light of my cheap laser pointer still resulted in a large response from the IR thermometer, while using an IR filter eliminated the thermometer’s response to the laser pointer. Taken all together, we feel pretty confident that my commercial IR thermometer is unaffected by the visible wavelengths of light (as it should be), while the high levels of contaminating IR energy being emitted by the cheap laser pointer are detected by the artifactually high temperature readings of the thermometer. 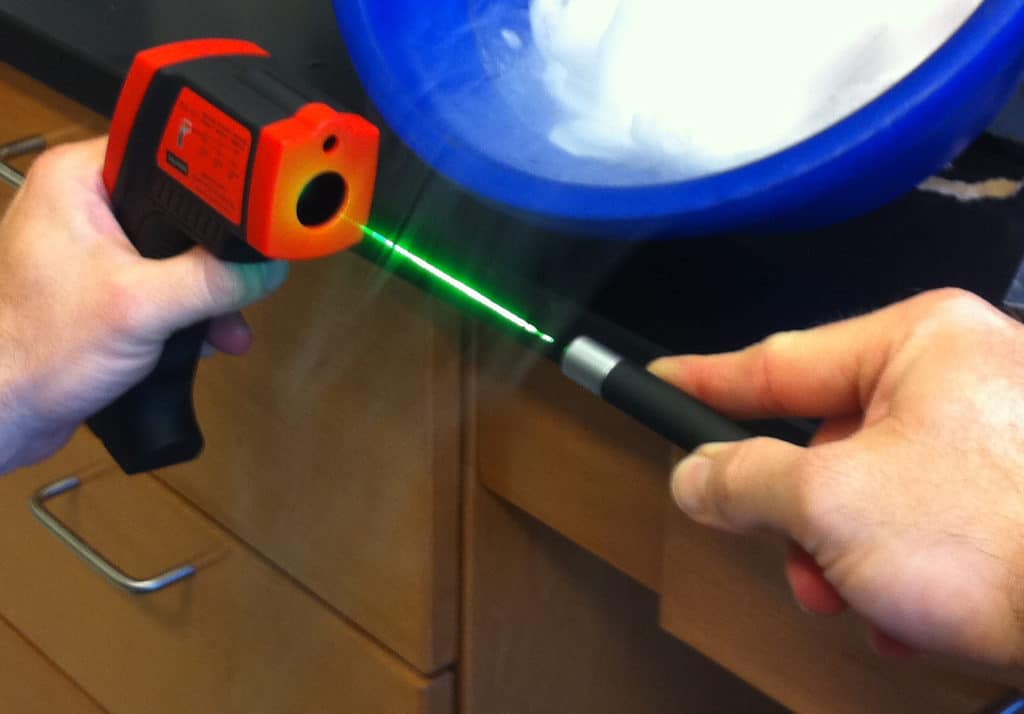 When using the IR thermometer as an IR laser detector, ensure that nobody’s eyesight is at risk, that you are actually aiming at the IR sensor of the thermometer (the bottom opening), and to take several (~10) readings with the laser pointer “on” to reduce the possibility that the potential IR beam simply missed the detector. In this photo, dry ice “fog” was used to visualize the visible laser beam, and should not be used while testing a laser pointer.

Conclusions
The readings on an IR thermometer can tell you if your laser pointer is also emitting IR wavelengths, and in theory the magnitude of the reading should bear some correlation to the amount of IR being emitted from the laser pointer. However, because we don’t know many of the parameters of the IR detector in the thermometer, we think it would be premature to draw any direct correlation between the IR power outputs of the lasers we tested and the temperature readings of the thermometer. However, like the apparatus designed by the NIST scientists, the IR thermometer can serve as a qualitative measure of the contaminating IR energy emitted by the laser pointer. IR thermometers are an inexpensive piece of equipment that have tremendous utility in the research lab, but because they are also used as no-touch children’s thermometers and in the heating and cooling industry, with a little effort these devices are also available to a large number of people outside of a laboratory setting. (In other words, if you don’t want to buy one of these, your building’s maintenance personal are likely to have one that they might let you use for a few minutes.) In addition, evaluating a laser pointer using an IR thermometer is very simple with no elaborate set up required, but please do use common sense and be careful not to orient the devices in such a matter that you might shine the laser in your eyes.