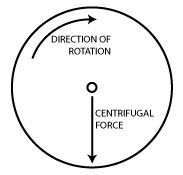 RPM and RCF are two units that can be used to describe the speed of a centrifuge. Although they may look similar, they are oh-so-different and confusing them has resulted a disastrous end to many an experiment.

So let’s set it out in black and white to make sure you don’t succumb to the same mistakes as those who have passed through the labs of the world before you.

Centrifuges work by putting your samples in rotation around a fixed axis, thereby applying an accelerative force perpendicular to the axis as shown in the diagram on the right.

The amount of force required to move a particle depends on the size of the particle. Large particles (e.g. cells) require less force than small particles (e.g. precipitated proteins). For more detailed info on this, take a look at these Wikipedia articles on sedimentation and the Lamm equation.

Relative Centrifugal Force (RCF) is the term used to describe the amount of accelerative force applied to a sample in a centrifuge. RCF is measured in multiples of the standard acceleration due to gravity at the Earth’s surface (x g). This is why RCF and “x g” are used interchangeably in centrifugation protocols.

The two variables that describe RCF are the radius and the angular velocity of the rotor. i.e. how wide the rotor is and how fast it is moving.

If the rotational speed is given in revolutions per minute (RPM) and the radius is expressed in centimetres (cm), then:

From this it is clear that the correct unit for the amount of centrifugation to use in a given protocol is RCF (a.k.a. x g).

But most centrifuges, especially microcentrifuges, only have settings for RPM. So unless you are lucky enough to have a centrifuge with an RCF setting, you will have to work out the corresponding RPM that will be required for YOUR centrifuge to achieve the RCF set out in a protocol.

This can easily be done by taking your ruler, measuring the radius of your centrifuge rotor and plugging the numbers into an online converter such as this one from DJB Labcare. Alternatively, the same site also has a very useful nonograph that you can print out and keep on your bench to use for rcf to rpm conversions.

The take home message is that centrifugation speeds in quoted in RPM will only be constant for centrifuges with the same rotor radii. If you use an RPM setting from a protocol where someone used a centrifuge with a different radius from yours, you will get a different RCF. Often the difference will not be significant enough to affect the sample or the centrifuge, but sometimes, e.g. if you use an RPM setting that was originally meant for a microfuge in an ultracentrifuge, it can cause problems.

A more common mistake is to assume that RCF=RPM which can result in lab disasters, like these!

As ever, and especially since I’m a biologist pretending to be a physicist today, please feel to comment!