If a random sampling of my hallway is any indication, then half of you don’t think too much of using an ultracentrifuge, while the other half of you are scared to death of it. I think the best approach is right in between these two perspectives: have a healthy respect for the ultra. Here are some hints and tips for using a preparative ultracentrifuge, disaster free.

Ultracentrifuges generally come in two flavors: analytical and preparative. Analytical ultras are specialized pieces of equipment, and you can read more about them here. Preparative ultras are the simpler, more widespread machines that you are more likely to use in the course of purifying viruses, DNA, or proteins, and handle larger volumes than the analytical ultras.

Balance your tubes
I know it’s obvious, but it has to be said. You CANNOT ‘balance’ your ultracentrifuge tubes by volume (i.e. pipetting the same volume into two centrifuge tubes and assuming they’re balanced), or by sight (ie they look like they have the same volume in them). You need to put them on the scale and, as a rule of thumb, balance them to within 0.1 grams. If you’re using a tube with a screw-on top, then include the tops while weighing the tube just in case the tube/cap assemblies you are using aren’t perfectly matched.

Know Your Rotor
You might not think of centrifuge rotors as perishable, but they are. During the lifetime of a rotor, the metal can start to fatigue and form microscopic cracks. If you have a clumsy labmate that drops or bangs the rotors together, then these microscopic cracks develop even faster. Low-speed rotors usually have an expiration date based on the manufacturer’s estimate of how often they are used. For precise estimates of an ultracentrifuge rotor’s lifetime, typically the rotor identification is recorded in a logbook along with the speed and time spent running. (Newer ultracentrifuges keep track of this information in their onboard computer.) Based on this, the rotors are derated (the maximum rpm for that rotor is reduced) over time. So rather than knowing what the maximum speed for a rotor was when it was new, it is more important to know what it is now. Failure to do this could result in the overused rotor breaking during a run, undergoing what is called catastrophic failure.

Know Your Tubes
The maximum speed of the rotor is only part of the equation. You also have to know the maximum speed for the tubes you are using given the volume of solution you will be placing inside it.  To put this a different way, reuseable ultracentrifuge tubes have a maximum volume and a minimum volume, and the maximum speed of the tube depends on the volume in the tube. A friend of mine unintentionally tested this idea several years ago, when they had to scale back a protocol, but tried to use the same centrifuge tubes they normally used in the protocol.  The result was a pair of collapsed tubes wedged into the rotor in a truly impressive manner. 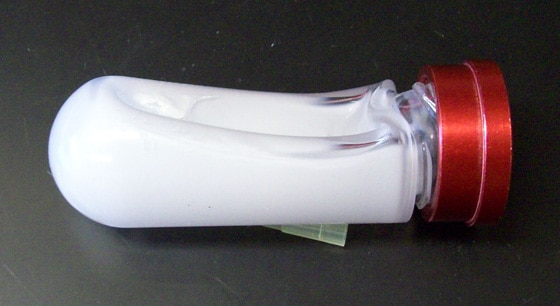 In case you were wondering how many PhDs it would take to unscrew a collapsed ultra tube from a rotor, the answer is 6.5 – 6 PostDocs and a Grad Student.  (But 4.5 of the PhDs were ‘supervising’.)

The reason for this is that the fluids that we work with are, by and large, non-compressible; however, air is quite compressible.  So when the tube contains more fluid, it is more structurally sound.  So if your lab uses reusable tubes like the one above (it used to be reusable, anyway), make sure everybody using them knows the minimum and maximum volumes that can be spun in the tubes, the maximum speeds the tubes can be spun at those volumes, and the acceptable and unacceptable solvents and pH’s the tubes can be exposed to. There are some conditions that may weaken the tube without causing a noticeable effect on the tube.

If you are using thin-walled sealed tubes, the tube must be completely full or it will collapse.  Only open-top tubes in swing-bucket rotors can have air in them, but even these are usually quite full to achieve the maximum resolution of the gradients they often contain.

Pay Attention to the Vacuum Seals
The seals on tubes aren’t just there to keep the liquids in, but also to keep the vacuum out. Ultracentrifuges maintain low temperatures while spinning at such high speeds by running under high vacuum, and thereby reducing heat generated by air-rotor friction. However, if you exposed your sample to this vacuum, then it would start de-gassing your sample, potentially causing some liquid to escape even if you are using a swing-bucket rotor. To make matters worse, if you are spinning the samples overnight or longer, then exposure to the vacuum will cause that sample to evaporate while its paired sample doesn’t, potentially causing an imbalance in the rotor. So pay attention to the seals on the tubes or on the buckets for a swing-bucket rotor, they may require a little vacuum grease on the threads to seal properly depending on the design. For fixed angle rotors, there may be an additional seal between the lid and the rotor – make sure this is clean and undamaged before your run.

No Buckets Left Behind
One of the most common sources for ultra-disasters is somebody running a swing bucket rotor without all the buckets in place. These rotors are designed to be used with all the buckets in place, even if some of them are empty. Run a six-bucket rotor with only four buckets, and the rotor will deform and turn the four that are there into projectiles.  In addition, it is usually a good idea to have a small mirror handy to check that all the buckets are properly seated into the rotor once the rotor is positioned in the ultra.

So before you start using your laboratory’s ultracentrifuge, know that it is a potentially dangerous piece of equipment, but one that can be used safely.  Read the manuals, learn about your reusable and disposable ultracentrifuge tubes, and, if nobody else in the lab has, talk to the service technician for your ultracentrifuge to determine the maximum rate speeds for your rotors.

Do you approach the ultra with fear, respect, or nonchalance? Have you ever had or witnessed an ultra disaster? Or do you have any other safety tips that I missed, please let us know in the comments!

The maximum speed of the rotor

is only part of the equation. You also have to know the maximum speed for the tubes you are using given the volume of solution you will be placing inside it.  To put this a different way, reuseable ultracentrifuge tubes have a maximum volume and a minimum volume, and the maximum speed of the tube depends on the volume in the tube. A friend unintentionally tested this idea several years ago, when they had to scale back a protocol, but tried to use the same centrifuge tubes they normally used in the protocol.  The result was a pair of collapsed tubes wedged into the rotor in a truly impressive manner.

Share this to your network:
TwitterFacebookLinkedIn
Written by Jode Plank