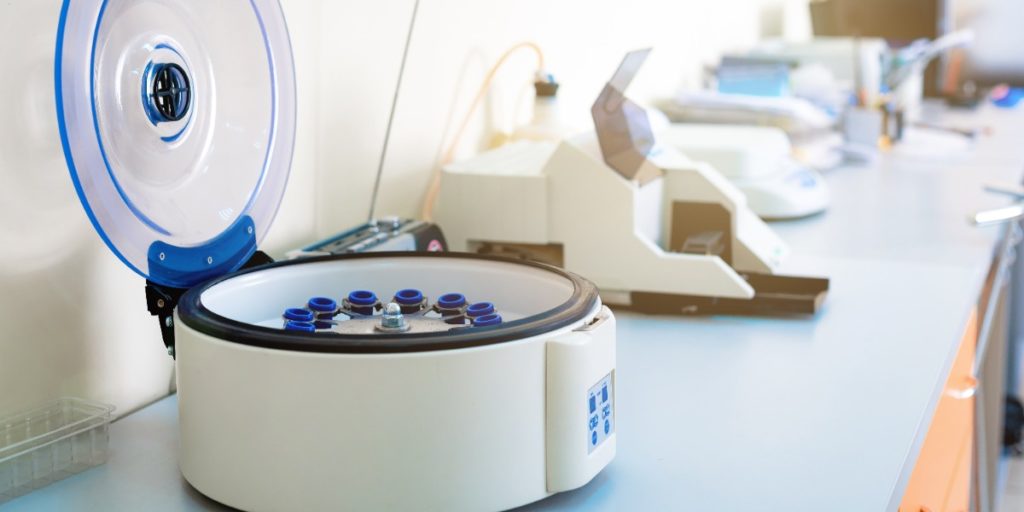 1. It’s All About Balance

Centrifugation produces centrifugal forces to effectively separate sample components based on size and density. Small weight imbalances can cause abnormal vibrations that can damage the rotor. An unbalanced centrifuge is as dangerous as an unstable chemical reaction. It can not only damage the instrument but can also start a domino effect of catastrophes all the way from instrument failure, to sample breakage that could release potentially harmful contaminants into the environment (infectious samples, harmful aerosols, etc.), and user injury, overall, resulting in large-scale destruction and posing a major safety hazard.

A) The Need for Precise Balancing at High Speeds

Precise balancing is crucial during high-speed centrifugations. To understand this better, we need to go back to some basic physics concepts. According to Newton’s second law, force (F) is equal to mass (M) times acceleration (A). Thus, the centrifugal force generated during centrifugation is directly proportional to the sample mass and acceleration. During circular motion, acceleration is related to the speed of rotation and the radius of the rotor. At high speeds, even slight variations in the sample mass can lead to a substantial force imbalance, which could be catastrophic.

B) Balancing Based on Rotor Type

Irrespective of whether the centrifuge has a fixed-angle or a swing-bucket rotor, two important factors to consider when balancing include sample volume and symmetrical arrangement of the tubes. It is important to ensure that the sample volumes are equal in all tubes and that the tubes are placed directly opposite each other in the centrifuge. If there is an uneven number of tubes, even it out by adding an extra tube filled with water to the same volume as the experimental tubes. If the solutions are not of similar density (e.g., acetone and water), the tubes should be of equal mass rather than volume to be correctly balanced. An additional factor to consider in the case of swing-bucket rotors is to make sure that all the slots contain rotor buckets appropriate to the machine and of the same weight. [1]

Another critical factor that influences the efficiency of separation is RCF. RCF is proportional to the radius of the rotor and to the square of RPM. Due to this square dependence of RCF on RPM, centrifugation speeds of 1000 RPM for 5 minutes and 500 RPM for 10 minutes are not interchangeable. The former produces a much larger RCF than the latter. Thus, it is important to consider RCF when determining the speed and time for your centrifugation.

Centrifugation generates heat, which can increase the temperature within a centrifuge (sometimes, by more than 15°C). This can affect the stability of temperature-sensitive samples. In such cases, refrigerated centrifuges are usually preferred. However, constant temperatures can also be maintained in an ambient centrifuge. The sample temperature during centrifugation is primarily influenced by three factors: rotor material, rotor shape, and speed of rotation.

During centrifugation, the temperature can be influenced by the rotor material’s thermal conductivity. Rotors made of metal, such as steel and aluminum, have a high density and high thermal conductivity. They transfer heat efficiently and get chilled quickly. On the contrary, materials like polymers and carbon fibers are heat insulators and maintain a constant temperature. [2]

The speed of rotation is directly proportional to the rise in temperature—at higher speeds, more heat is generated. It is important to understand the maximum speed of the centrifuge and the range of speeds that maintain a temperature range that will not change the outcome of the experiment. Usually, this information will be provided by the manufacturer in the equipment manual to help the user understand the limitations and work around it. [3]

During centrifugation, separation of the sample components continues during the deceleration phase. Many centrifuges offer the option to control deceleration settings (brakes) to bring it to a stop faster, but when do we really need this option, and what is the effect on sample outcomes?

Braking can be particularly useful during centrifugations involving nucleic acid extractions or bacterial cell pelleting, which are not affected by sudden stopping. However, for experiments that are more sensitive to abrupt deceleration, such as isolation of peripheral blood mononuclear cells and gradient centrifugations, braking can cause separated layers to remix. In such cases, it is more suitable to turn off the brake so that deceleration is gradual and does not disturb the gradients. Some centrifuges provide a range of deceleration settings. This can be useful when spinning mammalian cells, which are sensitive to sudden decelerations but, at the same time, require some deceleration to minimize the time taken by the centrifuge to come to a stop. [4]

One of the most common applications of centrifugation is to pellet samples, such as bacterial cells, mammalian cells, or nucleic acids. While using a fixed-angle rotor, the angle of the rotor determines the position of the pellet. To ensure you always know where your pellet is, a good lab practice is to always spin the tubes with the lid hinges placed in the same orientation (for example, lid hinges facing outwards). This is especially useful to prevent sample loss during DNA extractions when the pellet is nearly invisible following the ethanol wash step. In the case of swing-bucket rotors, the pellets are formed mostly at the bottom of the tube.

Overall, I hope reading this article helps you to work more comfortably and confidently with centrifuges. If you have seen or lived through a centrifuge disaster, go ahead and share your story along with any tips and tricks to ensure happy spinning in the comments below. May the force be with you!

Share this to your network:
TwitterFacebookLinkedIn
Written by Kavya Ganapathy