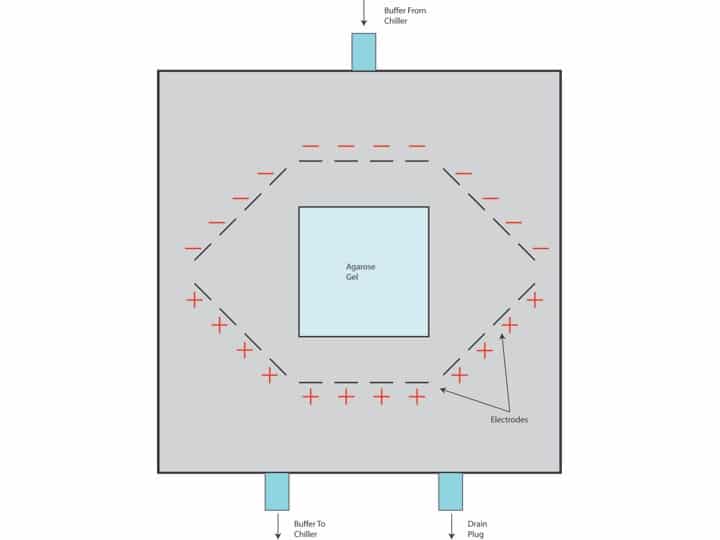 You have probably run a standard agarose gel hundreds of times. They are great for visualizing small DNA fragments up to 10 kb, but what if you want to examine really large pieces of DNA or even whole chromosomes? This is where pulsed field gel electrophoresis (PFGE) comes in! While the equipment required to run PFGE is much more complicated than the standard agarose gel you are used to, the concept is much the same.

An example of a PFGE apparatus.

An example of a single PFGE cycle, the arrows indicate which electrodes are active during a certain pulse cycle. The DNA is pulled at different angles throughout the program, with the net result being the DNA moving slowly towards the bottom of the gel.

The result is an agarose gel that can resolve large fragments of DNA and even intact whole chromosomes at the end of the procedure.

Contrary to what you may be used to, a PFGE program is not as simple as setting the voltage and walking away. PFGE power units allow the user to adjust a wide range of the run conditions in addition to voltage, such as the pulse angle and buffer temperature. This customization allows the run program to be adjusted to the specific type of sample being run. Extremely large samples (>MB) will have different run conditions than small ones, and you should adjust the conditions depending on the sample type.

The following components should all be optimized for the best results:

The voltage in PFGE is measured as V/cm. I have personally found that most protocols use 6 V/cm as the standard, allowing samples around a few hundred kb to be resolved quite well. If you are working with samples that are much larger in size (megabases), it is generally suggested to lower the voltage. The inverse is true for small fragments.

The pulse angle is the angle of difference between the electric currents that will be applied. Most protocols use an angle of 120°; however, this can often be adjusted. For instance, use a smaller angle to increase the resolution of large fragments and a larger angle for smaller fragments. Keep in mind, though, that increasing the resolution of one type of fragment often comes at the expense of resolution of the other.

Switch time has the largest impact on sample resolution. Switch time refers to how long the current will pull in any one direction. Use a short switch time for small sizes and a long switch time for larger fragments. As you might expect, many samples will contain a wide range of sizes of DNA fragments. To combat this issue, set the program to vary the switch time throughout the run. The program will ramp the switch time from a short time to a longer time over the course of the run to compensate for a variety of sizes within the sample.

Because the DNA is not moving in a straight line during the run, a PFGE cycle takes much longer to move DNA through the gel matrix. As a result, a single PFGE run usually lasts overnight and sometimes up to a couple of days. These long run times mean that buffer temperature must be maintained throughout the procedure to prevent overheating. This is accomplished by pumping the running buffer through a chiller during the run. In addition, sometimes you need to pause the run and add new buffer if the current buffer becomes exhausted. As you might expect, the run time is impacted by the temperature of the buffer. A lower temperature will mean a longer run time, but often times a greater resolution. Conversely, a higher temperature will result in a shorter run time, but lower resolution.

Like many of the procedures you face in the lab, the best pulse field gel electrophoresis results will come after some trial and error. Luckily, you can find many published protocols containing run conditions for a variety of different sample types. While that is a good place to start, don’t be afraid to modify the settings for your needs. Good luck!