A partial digest – typically done when you only want to cut one of two or more restriction sites in a DNA – can be a frustrating procedure to execute. The best advice anybody can give about partial digests is to avoid having to do them . However, there are times when there just aren’t many other options, and if you have to perform one, including ethidium bromide in the digest can help you get the results you need. Here I’ll tell you why this works, and give you some tips for optimizing the reaction.

Ethidium is a four-ringed aromatic molecule with three of the rings conjugated, which is common among fluorescent molecules. Even though the overall molecule is charged and quite soluble in aqueous solutions, this conjugated, three-ring structure is hydrophobic and is “looking” for a place to get away from the water. When DNA is present, this part of the ethidium molecule finds that home, slipping in between the stacked bases. It is thought that intercalating between the bases strips away the solvating shells of water around the three-ringed core, and because water is known to have a strong quenching effect, this allows a 20-fold enhancement of ethidium’s fluorescent response to UV light compared to ethidium in solution, which is why this chemical is used as a DNA stain.

Most importantly for this discussion, when ethidium intercalates into DNA, it changes the structure of the DNA. Ethidium increases the distance between the two base pairs that it binds to, causing the overall length of the DNA to increase. In addition, ethidium intercalation decreases the pitch of the bases (the angle of one base relative to the base above or below it) which has the effect of untwisting the double helix. To put this in different terms, normal, happy, B-form DNA has a twist of 10.4 base pairs per turn, whereas a DNA with an ethidium between every base (admittedly a level hard to attain) would have around 36 base pairs per turn.

In covalently-closed circular DNA, such as a plasmid, twist and writhe (supercoiling) are directly related. So when you start intercalating ethidium into a plasmid and changing the twist, the supercoiling of the molecule also changes. With enough ethidium, the negatively supercoiled plasmid (as it comes out of E. coli) becomes positively supercoiled, and each additional ethidium incorporated further positively supercoils it, like winding a spring. And like winding a spring, it gets harder and harder to add each additional ethidium until an equilibrium is reached, and no more ethidium can bind, even though there are still available sites for binding. This regulation of ethidium binding by supercoiling is the key to its utility in partial digestions.

Restriction enzymes bind to DNA and make specific contacts with the bases. If the right sequence is present, then the right contacts between the amino acid side-chains and the bases are made, and the enzyme attacks the phosphate backbone of the DNA, generating nicks on each strand of the DNA that are close enough to generate a double stranded break. If the right contacts aren’t made, however, then the enzyme doesn’t cut. Ethidium inhibits restriction enzymes when it intercalates into the restriction site and changes the shape of the site. Now, even though the right sequence is present, the positive and negative charges on the surface of the DNA are in different locations compared to normal, B-form DNA, and the restriction enzyme cannot recognize it. 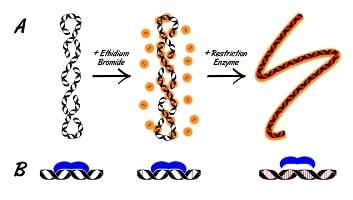 A- A negatively supercoiled plasmid binds a limited amount of ethidium bromide (orange), but upon digestion ethidium continues to bind to the linear DNA molecule until saturated.

B- Each of these illustrations corresponds to the conditions above in panel A. A Restriction Enzyme (blue) finds its recognition site by making particular contacts with the backbone and bases of the DNA. The more ethidium that intercalates into the recognition site, the more distorted the shape of the DNA becomes, preventing the enzyme from recognizing the restriction site.

From what I’ve told you so far, you can see that there are certain criteria for making this system work for you. First, if you are going to be cutting the plasmid with multiple restriction enzymes, you have to perform the partial digest first in the sequence. Second, you need to add a small amount of the restriction enzyme for the partial digest, since you don’t want so much around that the second cut can be made before the ethidium bromide has time to fully bind to the linearized plasmid.

I wish I had a protocol for this procedure that worked every time, but in reality the best conditions for a partial digest have to be empirically determined for each restriction enzyme. Here are some guidelines, however:

• This procedure doesn’t always work the first time, and even if it does there will be losses of the DNA through multiple purification steps, so the first thing you should do is prepare a reasonable amount (100 µg or more) of the plasmid you want to cut.

• The maximum amount of ethidium bromide that can bind to DNA is one molecule per base pair, so this is generally a good place to start in terms of ethidium concentration in the digest reaction. This translates to 30 µg/mL of ethidium bromide in a 20 µL digest containing 1 µg of plasmid. I set up a series of test digests using this amount as the highest, cutting the concentration of ethidium in half in each subsequent reaction. If one of the reactions gives me a good yield of single-cut plasmid, then I scale up that reaction. If one reaction shows little to no digestion while the next one down shows close to complete digestion, I set up a new titration series between the two concentrations.

In the end, this may not work with your restriction enzyme. Remember how I said that ethidium likes to intercalate in the DNA bases because it’s a hydrophobic environment? So is the interior of a restriction enzyme. If you are the lucky owner of a not-entirely-stable restriction enzyme, then the ethidium might kill it directly. So I would advise trying this method, but moving on with other approaches if you can’t see any evidence that the enzyme is active in dilute solutions of ethidium bromide.