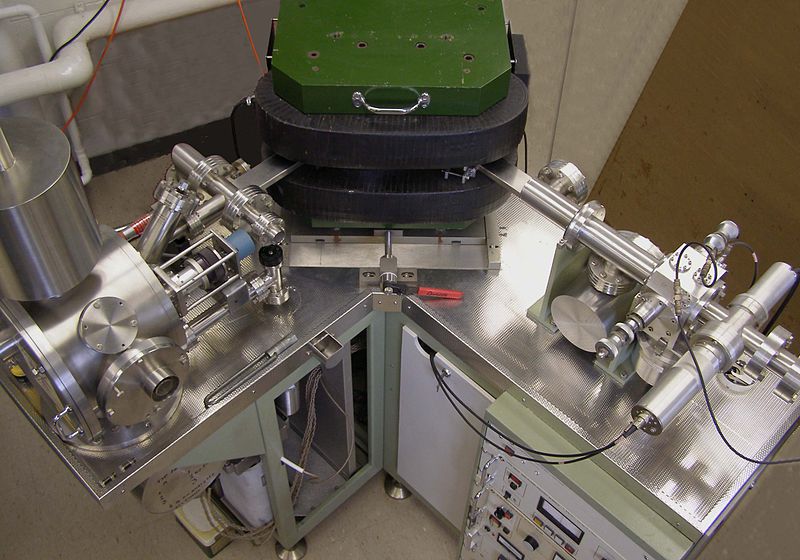 After you finish immunoprecipitating a protein or purifying a subcellular compartment, you need to identify what proteins you purified. You could attempt to identify your purified proteins the old fashioned (and slow!) way by running a multitude of Western blot. But rarely do labs have unlimited funds for Western blot antibodies. And lets face it, do you really want to run Western blots for your foreseeable future? No? Okay, well then it is time for you to “move on up.” Limit your use of Western blots and start using mass spectrometry to identify the proteins in your samples.

Mass spectrometry is often just called “mass spec” for short and it is magical in its ability to identify proteins. OK, so maybe I exaggerated a little…mass spec isn’t actually magical but it can feel that way because it is soooo good at identify proteins.

Mass spectrometry is performed by a machine aptly named a mass spectrometer. Mass spectrometers have been around since the beginning of the 20th century. Originally, physicists used mass spectrometers to study unknown chemical compounds. But then in the early 1990s, some brilliant people introduced new ionization methods that made mass spec also suitable for the studying of biomolecules. Including…drum roll please…proteins!

Ionizing mass spec works by separating digested (fragmented) proteins or peptides by mass and charge, creating a signature thumbprint or mass spec spectra for every protein. These protein spectra are then compared to a database of known proteins’ spectra.

Although mass spec has evolved so that it can now also be used to study intact proteins (top down proteomics), in this article I will tell you about standard mass spec methodologies (bottom-up proteomics) commonly used to study complex protein samples. But to do this I need to tell you more about how mass spectrometers work.

As mentioned earlier, mass spec separates peptides by size and charge or their mass-to-charge ratio (m/z) to create “mass spec spectra” for analysis. Therefore, for mass spec to work your fragmented peptides need to be charged. The two most widely used methods to charge or “ionize” your protein fragments are ElectroSpray Ionization and Matrix-Assisted Laser Desorption Ionisation:

So what ionization method should you use? When deciding whether you should use MALDI or ESI you should consider your goals. Complex samples are best processed with ESI, so it is not a surprise that the literature is full of ESI-based mass spectrometry. The range of most mass spec instruments is about 400-2000 m/z, and therefore large molecules cannot be analysed if z=1. But with multiple charge, e.g. +2 or +3, large molecules fall into the 400-2000 range and can be detected. This is where ESI shines, because it produces multiple charged ions, thereby reducing the m/z ratio and allowing the detection of more large particles in complex samples. Additionally, ESI can also be coupled online with liquid chromatography that fractionates your samples and therefore reduce complexity (we will talk about this in a future article). However, if you want to screen a single, large molecule and find post-translational modifications or mutations in its amino acid sequence, MALDI is a much faster technique.

After ionisation, your peptides are charged and ready to fly! And fly they do, into the mass analyser, which is in a vacuum. The mass analysers job is to separate one ion from another, exploiting the differences in the ions’ mass-to-charge (m/z) ratio, changing their trajectories and velocities, and sequentially leading the ions towards the detector.

Mass Analyser Metaphor: To better understand what is happening in the mass analyser picture this: Imagine a friend throwing balls of various sizes onto a huge wall (detector) while you (the mass analyser) lies down between the friend and wall with a water hose trying to hit the balls. The trajectory of the flying balls (ions) to the wall will be affected by both the balls’ mass (m/z in our case) and your water hose’s pressure (electric or magnetic field). You can lower or increase the pressure (strength of the electric or magnetic field) depending on which balls you want to reach the wall faster, i.e. low pressure will not affect a basketball much but will highly affect a table-tennis ball. Therefore, the final trajectory in which the balls will hit the wall will depend on both the mass of the ball (m/z) and the pressure of your hose (strength of electric or magnetic field). By controlling how the balls (ions) hit the wall (detector) you can ensure that not all balls (ions) will hit the wall (detector) at the same time – but rather sequentially – which is essential for the ions to be measured without saturating the detector.

Main Types of Analysers Are:

The detector’s job is to measure the m/z ratio and the intensity of each ion to create the spectra; i.e. for every one ion that hits the detector, one peak is added to the spectrum. These mass spec spectra are then displayed with the m/z on the x-axis and intensity on the y-axis.

Identifying Proteins From Their Spectrum

After you have used a mass spectrometer to create mass spec spectra for you proteins, you now need to assign your proteins their proper identities. There are two main ways this is commonly done:

This process of course requires that each parent ion is at least doubly charged. Therefore MS/MS is best suited after ESI. In MS/MS a good fragmentation will ideally break your peptides in all possible combinations. For example, a 10 amino acid peptide will fragment into peptides of 9+1, 8+2, 7+3, 6+4, 5+5. And since the molecular weight of all amino acids is known, the actual sequence of the peptide can be deduced form the MS/MS spectrum. No spectra database required!* Pretty cool is you ask me.

*Well most of the time: If your parent ion did not fragment in all of its possible fragment combinations — if say, in our example above only 7 out of the 10 amino acids were identified – then softwares (such as Mascot) can be used to compare the experimental sequence with protein sequence databases. And then with the help of some sophisticated algorithms you can fill the gaps in a propabilistic manner. Still cool, no?

Whew! That’s it for an introduction to mass spectrometry. To learn more about mass spec be sure to chat up the technicians who run your school’s mass spec core lab. Also keep in mind that good sample preparation is crucial for a successful mass spec experiment. I will be doing an article on the tips and tricks of proper sample preparation soon, so stay tuned.