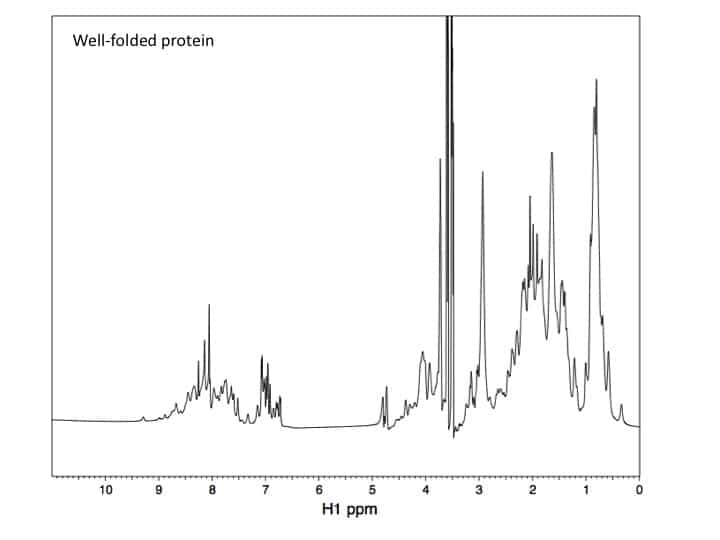 Having done my PhD work in an NMR lab, I sometimes feel like NMR doesn’t get the credit it deserves. As a structural tool, it always seems to play second fiddle to crystallography, and not many people seem to know about all of the different types of information that NMR can give you.>

So why does NMR get such a bad rap? Well, first, many people feel NMR isn’t worth the trouble because you have to isotopically label your molecule, usually with 15N, 13C, or 2H. This usually involves growing your bacteria or yeast in a media where you control the nitrogen (or carbon or hydrogen) source. Often the bacteria or yeast don’t grow as well in this media because it isn’t as nutrient rich. Sometimes labeling a molecule isn’t that difficult, but sometimes it’s nearly impossible…and it’s always going to be more expensive. While it’s true that most NMR done today on large biomolecules such as DNA, RNA, and proteins is multi-dimensional, and therefore requires isotopic labeling, there are NMR experiments you can do without having to isotopically label your molecule.

This article is the first of a three-part series in which I will tell you about three quick, easy NMR experiments you can do to estimate protein folding/stability, measure protein dimerization, and measure phosphorylation kinetics. I’m going to focus on protein NMR because that’s what I’m most familiar with and because DNA and RNA NMR can get a little tricky at times, due to signal overlap.

But before I go into how NMR can help you, there are some things you should know. NMR is not for everyone. You generally need about 600 ?L of a sample that’s at least 0.5 mM (you can get away with 0.1 mM, but we’re talking about ways to make your life easier here, not harder). Also, smaller molecules are better. If you’re new to NMR, anything larger than about 20 kDa might be pushing the limits; it’s not impossible, but you might have to use some special tricks, and again, this article is all about how NMR can make your life easier.

Have you ever purified a brand new protein and wondered whether it was folded, or found a sample in the refrigerator that was months old and debated whether to go ahead and use the questionable sample or spend a week making a new sample? Well, a quick 1D proton NMR spectrum can help you decide whether your protein is folded and therefore likely to be functional. 1D proton NMR spectra of proteins can get very complicated very fast. Each peak corresponds to a particular proton in the protein. So that means a protein of 100 amino acids could have roughly 1000 peaks, many of them overlapping. This is why most NMR done on proteins is multidimensional (2D, 3D, or even 4D). However, a 1D proton spectrum can still provide a quick and dirty way to qualitatively evaluate protein folding. After setting up your sample, a 1D spectrum usually takes seconds to collect. However, interpreting it can require an experienced eye, so you’ll probably want someone nearby who’s looked at a lot of NMR spectra.

The basic idea is that if a protein is well folded, the peaks in the 1D NMR spectrum are sharp and narrow and cover a large range of chemical shifts, whereas, if the protein is unfolded or partially folded, the peaks are broader and not as widely dispersed. A spectrum with good dispersion, i.e. peaks in the negative ppm range and peaks out near 10 ppm, is a good indication of a folded protein. Take a look at the 1D spectra below. First, you might notice that it kind of looks like a mess, and if you try to gain any information based on a specific peak, you’ve got your work cut out for you. However, if you look at the spectra as a whole, you can see that the peaks are well dispersed, ranging from a little over 9 ppm to almost 0 ppm.  Now, let’s focus in on the amide region, from about 7 to 10 ppm. The second figure shows the amide region of the same 1D spectrum we just saw while the third figure shows the amide region of the same protein, only unfolded. The first thing that probably stands out is that the unfolded spectrum is much noisier. Sorry about that. The difference in sensitivity between the two spectra isn’t because one is folded and one isn’t; it’s simply because the folded spectrum has more protein than the unfolded one. Looking past the difference in sensitivity, the spectrum of the folded more has more peaks than the spectrum of the unfolded protein, and the peaks are sharper and more dispersed. 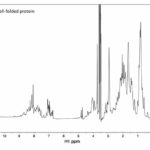 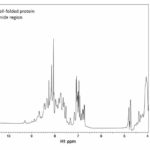 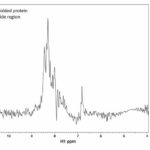 As I said, this is a rather quick and dirty technique to assess protein folding, and, as you have probably realized, qualitative. Another thing to watch out for is that peak width can also be affected by how well you set up the spectrometer (I’m talking about shimming for all you NMR enthusiasts out there), so it helps to have an experienced hand with you. Also, you are going to see all the protons in your sample in your 1D spectrum. While many NMR experiments have ways of reducing the water signal, signals from protons in buffers can be a problem. If you can get away with it, phosphate buffers are best for NMR because phosphate doesn’t have any protons. However, I’ve found that having 25 mM Tris in my buffer doesn’t usually pose a big problem. Sure, you’re going to see peaks due to your buffer, but, if you have a strong enough protein sample (again, aim for ~0.5 mM), you’ll be able to see your protein peaks just fine. Figure 4 shows a 1D spectra of a protein in a Tris buffer. The Tris peaks dominate the amide region, but the amide peaks of the protein are still visible. Also, this particular spectrum didn’t do the best job of getting rid of the water signal, but, as long as you’re looking at the spectrum as a whole, the buffer and water don’t cause too much trouble. By the way, this spectrum is of a molten globule protein. The peaks out near 10 ppm are a good indication that the protein at least has some structure, but we found out using CD that this protein likely doesn’t have a unique 3D structure, which is why this technique is qualitative. 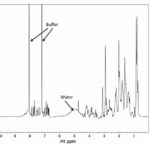 The advantages of using NMR to estimate protein folding

So why use NMR to evaluate protein folding? Well, the main reason is that the spectra can be collected quickly, meaning you can investigate a variety of buffer conditions and temperatures to see what conditions your protein likes and even to see how the stability of your protein changes over time. Other techniques, like circular dichroism, can give you similar information, but to really show that a protein is well folded by CD, you’d have to collect a melting curve, which usually takes a few hours.

So the next time you’re wondering whether your favorite protein is folded, consider talking to your local NMR enthusiast. A quick 1D proton spectrum can give you the confidence you need that your sample is good to go.

Still not convinced that NMR is for you? In the next part of this series, I’ll tell you how a 1D proton NMR spectrum can be used to determine protein dimerization. In the meantime, what techniques do you use to determine whether your protein is well folded?