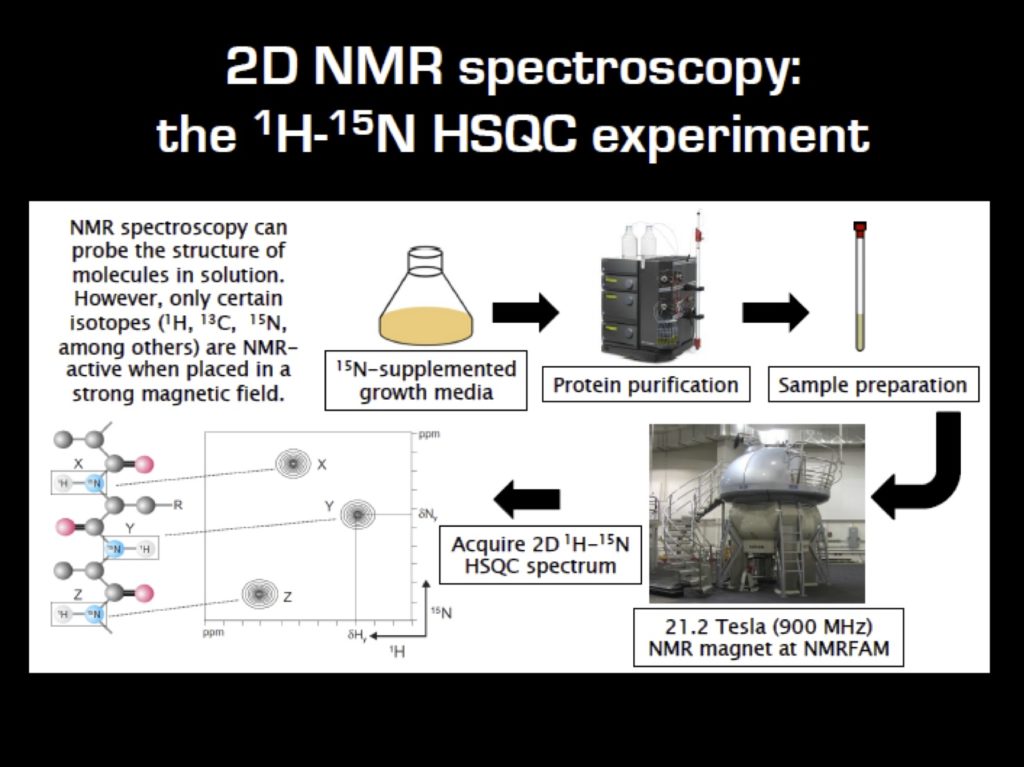 Welcome to part three of “What Can NMR Do For You”

This is an ongoing series in which we describe how you can use NMR experiments to characterize your protein of interest. In part one, we explained some critical points when doing one-dimensional (1D) NMR experiments on proteins and nucleic acids (e.g. sample preparation and stability) and observed how NMR can be used to quickly assess protein folding. In part two, we learned about spin relaxation rates (R1 and R2, or T1-1 and T2-1) and how they can be used to determine a protein’s rotational correlation coefficient to identify its oligomeric status in solution.

In this article, we’ll dive into multi-dimensional NMR and learn about isotope labeling and a common 2D NMR experiment to identify ligand-binding sites.

Wait a minute. Why bother labeling your protein with NMR-active (13C and/or 15N) isotopes you ask? While, instead of simply recording NMR data on the ~1,000 1H nuclei (or protons) in your ~100 residue protein (which we saw in part one), you can now include the ~150 15N and ~500 13C nuclei in a multidimensional spectrum to associate the position of each peak with two or more resonance frequencies, thereby vastly enhancing spectral resolution.

This offers the unique ability to correlate the chemical shifts of protons with chemical shifts of the 13C or 15N nuclei to which they are attached (although covalent attachment is not necessary), enabling the construction of heteronuclear (i.e. 1H-15N, 13C-15N-1H, etc.) 2D and 3D spectra (via double and triple resonance experiments, respectively) to simplify your NMR data interpretation.

Thus multi-dimensional NMR provides a powerful platform to begin dissecting your protein’s structure, function, and dynamics with atomic-resolution. Not many biophysical techniques can offer such information about proteins in solution.

Load up on protein

If your protein expresses well in E. coli, (we’re talking around 10’s of milligrams per prep), the isotope labeling process is a breeze – grow your bugs in M9 Minimal Media and switch out NH4Cl with 15NH4Cl and glucose with 13C-labeled glucose, which respectively cost $80 and $180 per gram from Sigma (much cheaper if bought in bulk, e.g. Cambridge Isotope Labs offers 10 grams of 13C-glucose for $900). For 1 L of M9 Minimal Media, you’ll need 1 gram of 15NH4Cl and 2 grams of 13C-glucose. Purify your protein as normal, and voilà! All nitrogen atoms will be labeled with 15N and all carbon atoms will contain 13C.  If your protein expresses poorly, you can still label with 15N and 13C, but the process is simply more expensive as you’ll need more isotopically labeled media.

The advantages of multi-dimensional NMR

OK, the protein has been isotopically labeled, now what? Well, there are a number of things you can do!

Let’s assume you’ve assigned your protein’s NMR signals to specific residues and there’s a ligand that binds to your protein. You’re interested in identifying the binding interface upon your protein, but how can you do this?

Using a common 2D NMR experiment called the 1H-15N HSQC(heteronuclear single-quantum coherence), which gives one peak for every 1H attached to a 15N (e.g. backbone amides and nitrogen-containing side-chains) you can identify the “fingerprint” of your protein’s backbone, and then quickly and easily identify the ligand’s binding interface.

Chemical shifts, recorded as the difference between the resonance frequencies of a given nucleus and a reference compound (expressed as parts per million, or ppm), are exquisitely sensitive to nuclei’s chemical and electronic environments, and the precise positions of chemical shifts can be accurately followed during NMR experiments. As such, you can utilize the changes in amide proton (1HN) chemical shifts as a proxy to elucidate a ligand binding site upon your protein.

To identify a ligand binding site on your isotopically labeled and assigned protein:

The chemical shift perturbations can then be bunched into three relative bins to summarize their effects:

Below is an example of this process. Shown in red are the 1HN resonances of 15N-labeled HscB (PDB 1FPO) that were broadened out in the presence of unlabeled ligand (in this case, another protein); in blue are 1HN resonances that experienced intermediate chemical shift perturbations (> 0.10 ppm); and in black are 1HN resonances that were slightly affected (< 0.10 ppm) or unaffected by the ligand. In panels A and B, chemical shift perturbations were mapped onto the structure of HscB in the presence of HscB’s ADP- or ATP-bound chaperone (HscA), respectively.

So, the next time you wish you could specify which residues of your protein are involved in binding to a ligand, look toward NMR for assistance. In a matter of hours, you’ll have a specific ligand binding site in-hand from which further mutagenesis- and function-based studies can be pursued.

Share this to your network:
TwitterFacebookLinkedIn
Written by Reid Alderson