To pull together our discussions so far on hypothesis testing and p-values, we will use the t distribution as an example to see how it all works. The t distribution (you may have heard it called Student’s t) is a probability distribution that looks like a bell-shaped curve (or normal distribution).

If we sample repeatedly from a population in which the null hypothesis is true, the t distribution shows the long-run probabilities of various t values occurring.

But what is a t value?

We calculate a t statistic from our data set. Here’s the calculation for testing a sample mean:

Whereas, if our sample mean is further away from the hypothesised mean (e.g. 63) the resulting t statistic would be larger.

We then look to see where our calculated t statistic lies on the t distribution. Because it is a bell-shaped curve, the data clusters about the mean. Values further away from the mean (i.e. toward the tails of the distribution) are not impossible if the null hypothesis is true, but they are unlikely. 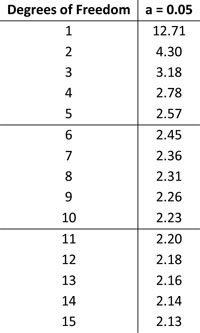 At this stage we tie back into p-values. Often p-values are presented as some magical number, with researchers perhaps unsure where they actually came from. Here’s the secret: there’s nothing magic about them. As we’ve already discussed, p-values tell us the probability of obtaining our t statistic, or one more extreme, given the null hypothesis is true. That is, what area of the t distribution lies beyond our calculated t statistic? 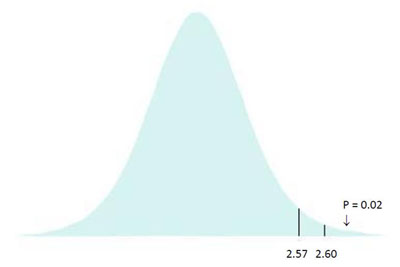 Next up: using all this information to start working through some statistical examples! In the meantime, post your comments below on how you’re finding the stats series so far and what you’d like me to write about next.

Share this to your network:
TwitterFacebookLinkedIn
Written by Sarah-Jane O'Connor
Image Credit: Daeveb