Whether you work with human cell lines or microbes, their growth is governed by the same principles. I invite you to learn about something that lies at the base of any work with cell culture, whether cells have circular or linear chromosomes: the S-curve of the population growth. The length of each phase depends on the organism and growth conditions, but the stages of growth remain the same. 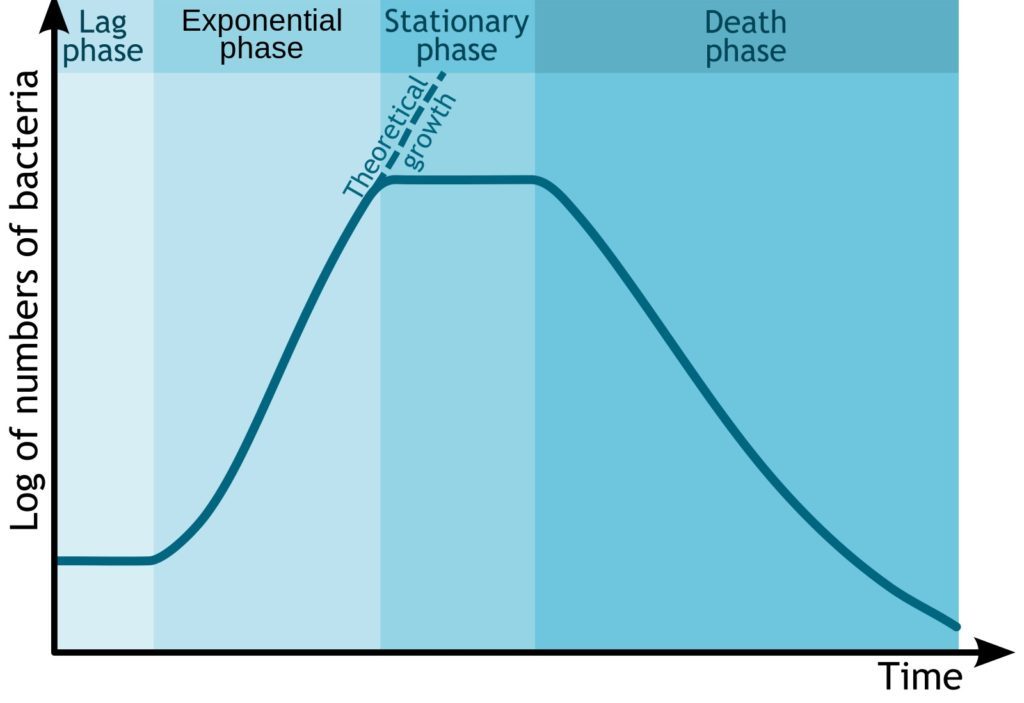 Every batch culture starts with inoculation. That’s where you encounter the “chicken and egg” problem. That is, depending on which stage of your inoculate (or starting culture) comes from, you will get different results. Many a PhD student has scooped a loop full of frozen culture into a 3 L flask only to discover nothing growing several days later. Read on to know what you need to do to get your culture growing fast and efficiently.

Lag Phase – The Lower Arc of the S-Curve

The ideal situation is to inoculate a freshly grown culture (log or early stationary phase) into the same medium and grow at the same temperature. But, even then you will not see any significant change in cell density for a while. Cells take time to adjust to their environment and recalibrate gene expression. The closer the initial state of the inoculate to your current condition, the faster cells will grow. You know you’ve reached the end of lag phase when the OD of your culture reproducibly doubles in a specific unit of time.

During this phase, most cells in the population are viable and actively growing and dividing. The division time depends on your organism—the fastest for Escherichia coli is once in 20 minutes,1 90 minutes for Saccharomyces cerevisiae,2 and around 24 hours for HeLa cells at optimum temperature. But cell division time also depends on how close your conditions are optimized for the organism (oxygen, nutrient concentration, temperature, etc.). In culture medium all components (such as carbon sources) are usually in excess, so adding more of the same will not decrease division time.

Most cellular biologists use cultures in log phase for their experiments, because most of the cells are at optimum health. You can maintain log phase for a long time in a chemostat culture. But in normal, batch conditions, sooner or later the cells run out of a limiting factor and division slows down. For biochemical experiments (such as protein isolation), harvest cells at the point of maximum cell density, just as they are going into stationary phase (a kink between the upward curve and upper loop). Late log phase is the best point to take an inoculate to start a new culture, because most of the cells are viable and ready for a division.

The next two stages are home for people who study aging. Just as a cell culture is going into retirement, they start their experiments

In batch culture, the log phase does not last forever. Cells run out of nutrients and/or form contacts to each other that serve as signals to switch off division. The density of the culture usually does not decrease and can continue going up during stationary phase. A few cells die off, creating debris and serving as a source of nutrients for the survivors and some survivors even divide. Most of the cells are viable. The length of the stationary phase depends on the organism and conditions. Shoving cells into a fridge may not increase the length of stationary phase because the cold shock requires energy expenditure in nutrient-limited conditions.

The stationary phase leads to death phase: a point when your cells are dying off fast. It is possible to recover culture at this stage, but because division-capable cells are few and far between, the lag phase will take a long time relative to an average time after inoculation from log-phase. Truthfully, it’s not a good idea to try using culture in this stage. It’s better to inoculate a new, small starter culture from the frozen stock.

I hope after reading this post you understand why it is important to use a new inoculate and why sometimes your culture does not grow straight away after inoculation.  You should also understand why your optical density may suddenly remain stagnant after increasing like mad for a while. Know the expected doubling time of your culture and determine what growth stage is best for your experiment.