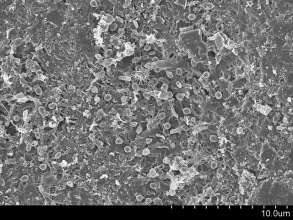 What do water pipe slime, dental plaque, and persistent contact lens case contamination have in common? All are the result of biofilms!

Biofilms are aggregates of microbes that adhere to surfaces using secreted matrices. Although relatively under explored, this fascinating phenomenon plays a critical role in some of the biggest challenges currently facing medicine, ranging from antibiotic resistance to medical device contamination.

In this article, you’ll learn the basics about biofilms: their discovery, their composition and formation, how microbes live and interact within them, and their influence on public health.

The Discovery of Biofilms

Antony van Leeuwenhoek, a drapery shop owner and inventor of the microscope in 1674, was technically the first person to observe microbes in biofilms—in a rotten molar he extracted from his own mouth!

Though he didn’t know it at the time, dental plaque is the result of a well-organized biofilm composed of hundreds of microbial species. “I can’t forbear to tell you, most noble Sirs- I dug some stuff out of the roots of one of my teeth… and in it I found an unbelievably great company of living animalcules, moving more nimbly than any I had seen up to now,” Van Leeuwenhoek wrote in a letter to the Royal Society in London.1 “Indeed all the people living in our United Netherlands are not as many as the living animals I carry in my own mouth this very day.” In Van Leeuwenhoek’s time, the existence of microbial life within human bodies had only been suspected by philosophers.

Detailed studies of biofilms, however, were challenging without improved technologies. In 1940, with the help of standard culturing techniques, scientists found that bacterial growth speeds up when a surface is included in media that allows the bacteria to attach to it.2 Not until electron microscopy, and specific polysaccharide-specific stains, became available was the first high-resolution pictures of biofilms captured in a wastewater treatment plant in 1969.3 Since then, biofilm research has been conducted using an array of advanced microbiological and imaging techniques.

Composition and Formation of Biofilms

Now, let’s take a deep dive and look at what makes up a biofilm. The formal definition of a biofilm is a consortium of microbes bound primarily by extracellular polymeric substances (EPSs). EPSs are largely composed of highly hygroscopic polysaccharides that offer bacteria protection from desiccating conditions. EPS also contain an array of protein, DNA, lipids, and humic substances, although these occur in relatively small amounts compared to the large quantities of polysaccharides present.

A biofilm forms when a substratum, or surface material, is “conditioned” by organic material such as proteins, lipids and other small molecules that adhere to the surface. Bacteria then attach to the substratum and other materials to strengthen the EPS, bolstering their attachment to the surface.

High shear forces negatively impact biofilm formation. Shear force occurs when there are two opposing forces at an interface, like between a liquid and solid. If the liquid is moving in one direction, like in a tube or pipe, shear force increases. This is why biofilms form more easily in stagnant water!

The nature of the substratum also plays a major role in how easily a biofilm can form. Hydrophobic surfaces like Teflon or plastics facilitate more rapid biofilm formation than hydrophilic surfaces such as glass. Rougher surfaces provide a greater surface area and less shear forces from media, leading to easier colonization. And of course, the microbe itself has a lot to do with attachment. For instance, if the microbes have flagella, they can better overcome repelling forces associated with the substratum.4

Life in the Biofilm

When you think about the word “film”, you’re likely to imagine a thin, homogeneous layer of evenly distributed cells bound up in a matrix. Think again! Biofilms are incredibly heterogeneous at the microscopic level and look very much like cities bustling with micro colonies, connected by channels through which water, nutrients, and oxygen can diffuse (Figure 1). They vary greatly in thickness and structure and can appear gel-like or fibrous-like under an electron microscope. The structural properties of a biofilm are highly dependent on factors such as the strains present, the type of substratum, nutrient availability, and from the liquid-solid interface. 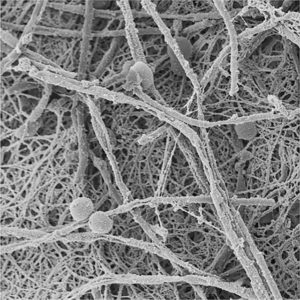 Bacterial competition, predation, and even symbiotic relationships are widespread in active biofilms. Quorum sensing is also rampant in biofilms, signaling bacteria to produce stronger matrices and influencing the rates of cell attachment and de-attachment. Plasmid conjugation, transformation, and transfection also occur more frequently in biofilms since bacteria are closer together than in free solution, and hence there is a higher concentration of DNA to take up. And, since oxygen is limited within EPS, gene regulation shifts to increase the transcription of genes responsible for fermentation and glycolysis.

Biofilms also offer a secluded niche for bacteria offering protection from antibiotics and disinfectants. Take for example microbial “slimes” in industrial water systems, which are highly resistant to bleach. In these biofilms the EPS matrix slows diffusion of chlorine and can even react with chlorine to inactivate it entirely!5

Research on biofilm formation and maintenance provides scientists with an abundance of opportunities to improve public health. For instance, controlling water line corrosion is important since rough corroded surfaces on the inside of pipes are prime real estate for pathogenic bacteria to attach to and create biofilms.

Most hospital-derived infections are the result of contaminated medical devices such as catheters and prostheses that harbor biofilms.6 Cystic fibrosis (CF), caused by a genetic mutation that hinders mucosal movement, renders sufferers extremely susceptible to the pathogen Pseudomonas aeruginosa. Pseudomonas aeruginosa forms biofilms composed primarily of bacterial alginate on the surfaces of the lungs, which is quite resistant to the host’s immune system. This results in a crescendo of immune responses leading to severe inflammation that damages lung tissue. Besides creating a shield from antibiotics and other CF treatments, bacterial alginate allows P. aeruginosa to mutate and adapt to further withstand therapies. Therefore, the prevention of bacterial alginate formation and its removal is a topic of intense study.7

Beyond public health, a wealth of opportunity exists in applied biofilm research. We can exploit their intrinsic properties for purposes such as bioremediation, wound healing, and energy solutions.8 Biofilm research may also uncover new proteins that have commercial development value, such as starch hydrolyzing enzymes, proteases, cellulases, pectinases, and lipases—all of which are all extracellular secretions of biofilms.