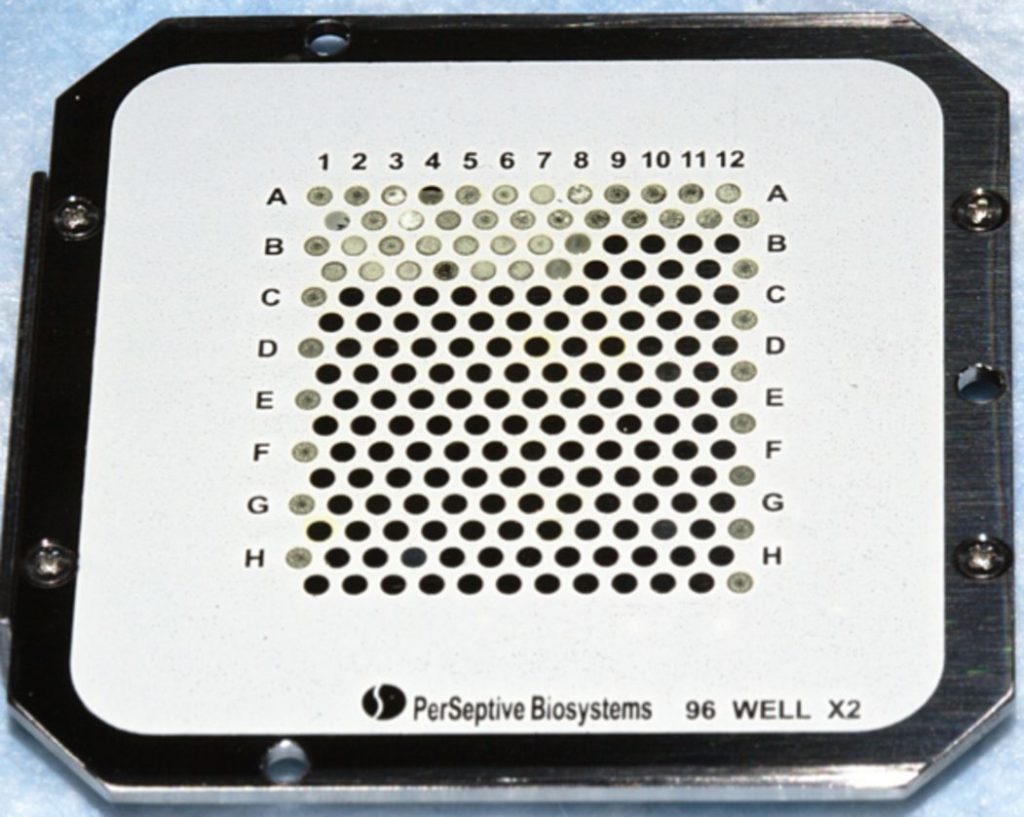 Matrix-assisted laser desorption/ionization (or simply, MALDI) is a type of mass spectrometry method. If you are new to mass spectrometry, check out our excellent primers, titled How Does Mass Spec Work and Get Out of Western Blot Hell: An intro to Mass Spec. Basically, however, mass spectrometry allows you to measure, sort, and quantify small molecules according to their mass.

What makes MALDI different from other mass spectrometry methods is that it relies on the use of a compound of crystallized molecules, called the matrix, which acts as a buffer between your sample and the laser. The matrix also helps ionize the sample, carrying it along the flight tube so it can be detected.

Once you’ve picked a good MALDI matrix though, you need to make sure you apply it properly (read: like a boss) to your sample so that you can generate high-quality MALDI data.

If you just want to use MALDI to confirm the presence of a small molecule or just simply profile a sample, the dried-droplet method is perfect. The matrix solution is usually prepared in a mixture of water and organic solvents, such as methanol, ethanol, and acetonitrile. It is then mixed with the liquid sample and spotted onto a MALDI target plate (as shown in Figure 1). 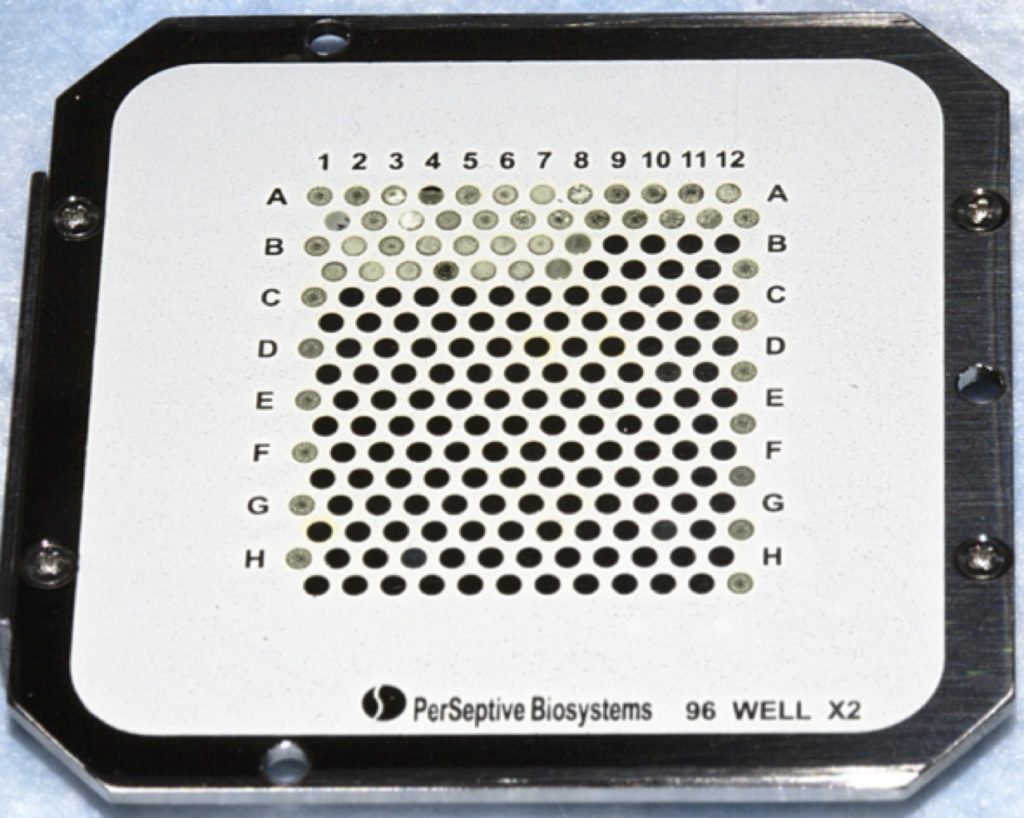 Figure 1. Samples on a MALDI target plate. Made available on Flickr by Michael Pereckas (CC BY 2.0).

The dried-droplet is also ideal for testing out which matrix works the best for your MALDI imaging experiment. Various MALDI solutions are dropped onto the surface of the tissue sample mounted onto a MALDI target plate or onto an indium tin oxide-coated MALDI glass slide. Spectra are acquired from each dried-droplet and you can decide which matrix works best for your experiment.

However, the dried-droplet method does not work well for the actual MALDI imaging experiment. To acquire high-quality data, the entire surface of the tissue region of interest must be homogenously coated with a thin layer of matrix.

So, How Do You Get a Thin, Homogenous Matrix Layer on the Surface of the Tissue?

When the MALDI imaging technique was first being developed, the mounted tissue sections were simply dipped into the MALDI matrix solution.1 But this did not work that well, because there was a lot of analyte delocalization and the matrix application was not that homogenous.

To overcome this challenge, Kim et al.2 introduced the vapor-phase deposition of matrix via sublimation, which was first successfully applied to a MALDI imaging experiment in 2007.3

The Art of Sublimation

The matrix sublimation technique exploits the fact that matrices, such as 2,5-dihydroxybenzoic acid, 3,5-dimethoxy-4-hydroxycinnamic acid, and 2,5-diaminonapthalene, sublimate without decomposition under conditions of reduced pressure and elevated temperature. The technique is illustrated in Figure 2.

Briefly, the MALDI target plate or slide with the tissue is cooled down and placed under vacuum. Then, the dry matrix in the sublimation chamber is heated up, sublimates and is deposited as an even layer of small crystals across the surface of the tissue. Since this approach is solvent-free, it eliminates the potential of analyte delocalization. However, while the temperature and sublimation time can be controlled, other elements such as the exact temperate of the MALDI target or the deposition area are not easily regulated. 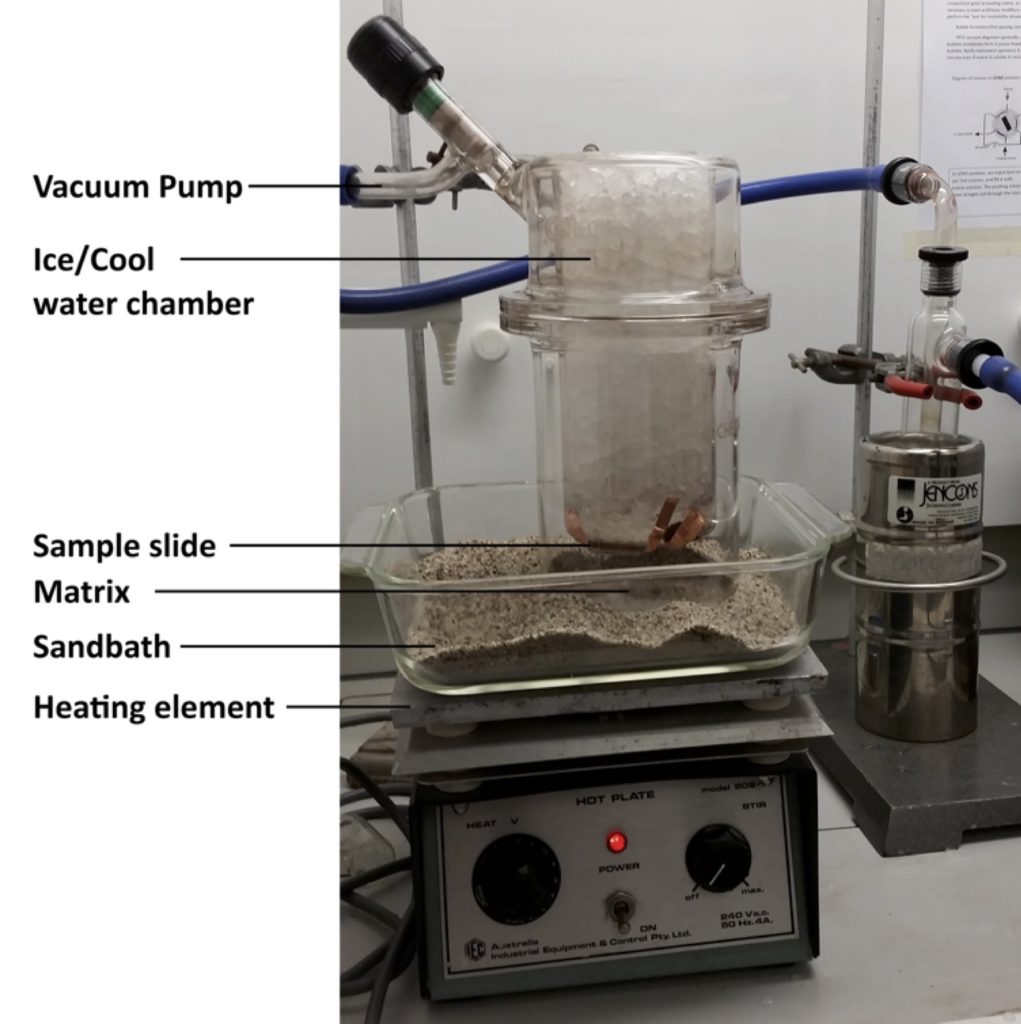 Scientists are a resourceful bunch though, so in addition to sublimation, there have also been reports of the use of modified inkjet printers,4 airbrush,5 and thin layer chromatography sprayers3 for matrix deposition.

Since there is poor sample-to-sample poor reproducibility with the use of hand-held airbrush sprayers, recently there has been a shift to using commercial automated devices. A few commercial products that are currently on the market are outlined below.

Recognized as being one of the “most technologically significant products introduced into the marketplace” in 2007, the Labcyte Portrait 630 multi-spotter provides multi-step protocols, precise drop-on-drop positioning, and flexible droplet timing. System users can optimize the reaction conditions so that the formation of crystals is more reproducible.

The advantage of using the HTX TM-Sprayer is the accelerated rate of matrix adsorption into the tissue because of the heating of the matrix solution. Further, the controlled flow of dry air or nitrogen focuses the spray and controls drying time, ensuring analytes do not have time to delocalize.

So, Which Approach Is the Best?

However, determining the real winner between these two approaches is up to you (based on the type of matrix you want to use for your next MALDI imaging experiment!).

Share this to your network:
TwitterFacebookLinkedIn
Written by Lakshini Mendis
Image Credit: GDS-Productions