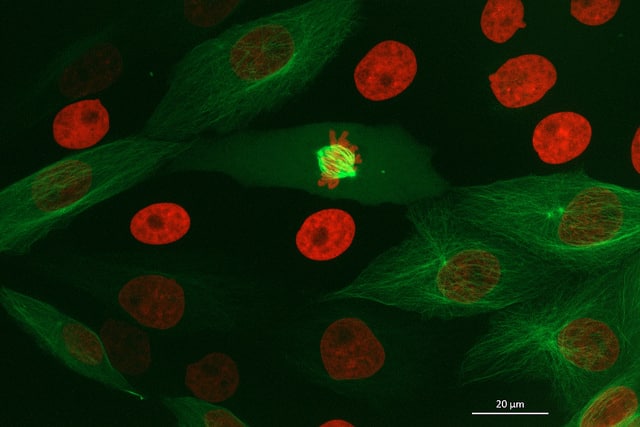 Even in the most basic applications, fluorescence microscopy can be a very powerful technique. Simply put, the ability to actually see the biology you are interested in cannot be matched in directness.

Often, the aim of fluorescence microscopy is to observe the effect of an experimental manipulation. Ultimately, you would like to know that the observations you make from your beautiful fluorescent images are a direct result of a particular variable. However, in biology, confounding variables lurk around every corner.

When working with cells, a massive confounding variable is the cell cycle. The chances that an experimental manipulation of any kind will be slightly toxic (slowing or halting progression through the cell cycle), or slightly promote proliferation are great. Additionally, almost all biological processes are influenced by which phase the cells are in, often being entirely absent in one phase or another.

Therefore, controlling for differences in the ratio of cells in each phase of the cell cycle between your treatment and control is vital.

This can be achieved by monitoring proliferation rate closely, synchronizing your cells in the phase you are interested in, or fluorescence activated cell sorting. However, sometimes it simply makes the most sense to just know what you’re looking at.

Below are 4 powerful strategies for combining cell cycle analysis with fluorescent imaging.

This is by far the most informative approach. FUCCI simultaneously distinguishes cells in G1 phase, cells at the initiation of S phase, and cells in G2 phase. Additionally, the technique can be used in live cells allowing you to track individual cells as they progress through the cell cycle.

How Does FUCCI Work?

The FUCCI system is based on two cycling proteins Cdt 1, which is present during G1 and becomes absent at the initiation of S phase; and Geminin, which becomes present during S phase and remains elevated during G2. Cdt 1 and Geminin are targeted by specific E3 ubiquitin ligases for degradation when the other is present. FUCCI makes use of Cdt1/Geminin regulation by fusing the degron sequence from each protein to a different fluorescent reporter. Cell cycle is then determined based on which fluorescent protein is present.1

The downsides of FUCCI are that it occupies two channels on your microscope and that you must buy or produce a cell line that either stably or transiently expresses the constructs.

Visualize a Cyclin with Indirect Immunofluorescence

This idea is intuitive and similar to the FUCCI approach. Since different cyclins are naturally present in different phases of the cell cycle, you should be able to visualize them to tell you where you are. In practice, you are at the mercy of the antibodies available and the ability to distinguish your signal from background noise.

Cyclin A antibodies work great and can easily distinguish cells in S/G2 (positive) from G1 cells (negative). Some other cycling proteins are useful for marking phases of the cell cycle too, these include CENP-F which can identify cells in late G2/M phase, and Ki-67 which is excluded in non-proliferating G0 Cells.

One drawback of this approach is that it constrains both the species and fluorophore choice for other antigens you wish to immunolabel. If you plan on immunolabeling for cell cycle regularly, it would be wise to find a primary from a species that is used less commonly (think rat, donkey), or to get a primary that is directly conjugated to a fluorophore.

If you are interested exclusively in S-phase, the gold standard is to monitor the incorporation of a DNA analog. The most popular is BrdU, which requires DNA denaturation and detection with a BrdU antibody. However, the conditions for BrdU detection often require extraction of the cytoplasmic proteins. EdU Click-IT chemistry kits are an easier and more flexible option. These allow detection of EdU incorporation without antibodies or denaturation making the quick staining protocol ideal for combining with other methodologies.

Don’t Add Anything, Just Use Your Counterstain!

So reviewer number three just pointed out that you didn’t account for cell cycle and it would be a huge pain to go back and optimize everything with the addition of yet another fluorophore.

Bummer! Wouldn’t it be great if there was something already in your images that could tell you about cell cycle?

Whelp, you’re in luck…sort of.

Quantification of DAPI, Hoechst, or other counterstains can be used to infer cell cycle indirectly. This is similar to what is done routinely using flow cytometry. Whether you are using flow or microscopy, the goal is to produce a histogram of nuclear intensities that can convincingly distinguish cell cycle. G1 cells should have half the nuclear intensity of G2 cells and S phase cells should have nuclear intensities between G1 and G2. A recent Nature Protocols paper describing this approach suggests imaging a minimum of 500 cells to clearly distinguish G1, S, and G2 phase cells.2  However, in my experience if you simply need to distinguish the peak of G1 cells from S/G2 cells you can get a good histogram with 200-300 cells.

Additionally, in order to convince a reviewer of the validity of this approach, you may need to prove in a separate experiment that your nuclear intensity can predict some independent marker of cell cycle. For instance I have combined Cyclin A and DAPI intensity to show that I could produce a reliable histogram (with Cyclin A staining cells confirmed to be in G2 by DAPI intensity).