If you’re planning on using lentivirus for your next experiment, chances are you’re wondering how much virus to use. For in vitro work, multiplicity of infection (MOI) is the theoretical number of virus particles applied per target cell. That is to say, if you have 1 million cells and you want an MOI of 5, you need 5 million lentivirus particles for your transduction.

Once you have a rough idea of the number of virus particles required, you can calculate the volume and titer of virus needed to achieve your target MOI. At this stage however, researchers new to gene therapy work often run into problems. Having calculated an ideal amount of lentivirus for their experiments, they discover that the yield from their lentivirus production is too low. This usually leads to repeated attempts to produce more virus, leading to further frustration – colleagues and commercial providers routinely achieve high titers! Why can’t I?

Don’t Panic When It Goes Wrong!

Before you embark on endless rounds of optimization (a different transfection reagent, new cells, etc.), put your pipette down and listen up! It’s quite likely that a low lentivirus titer is not down to you being an incompetent lab chimp. There are several factors controlling lentivirus titer to varying degrees.

First up, be nice to your 293 producer cells:

It’s best to split your cells the day before transfection, to make sure they are happy and healthy. Optimal cell confluency at the time of transfection depends on your chosen transfection agent. Lentivirus particles are sensitive to changes in pH, so adding HEPES buffer to the culture media can protect the virus from pH extremes.

For efficient virus production, you need to get all of your plasmids inside the maximum number of cells, so it goes without saying that you need the best possible transfection efficiency. There are many different commercial and non-commercial transfection reagents available.

Bear in mind that if you need to prep lentivirus regularly, commercial transfection kits can be an expensive option. Cheap chemical reagents like calcium phosphate and polyethylenimine (PEI) work well and are cost-effective. There’s some evidence (mostly anecdotal) that certain transfection reagents result in higher virus titers. Interpret these results with caution, as there is no real consensus on the best reagent to use. If you are new to the field, you can certainly compare transfection reagents, but don’t spend months on this step. If you are getting good cell transfection then it’s probably best to stick with what you’re using.

Your lentivirus plasmids don’t have to be purified using a specific method. No matter what your professor claims was the done thing back in 1998, you don’t need to use super pure endotoxin-free kits or cesium chloride! Just ensure that your plasmid is of good quality and a reasonable concentration (over 100 ng/µl). Again, it’s not worth obsessing over this step. It’s actually possible to make virus from ordinary miniprep DNA, although you may see a drop in titer.

Now that you have healthy cells, a good transfection reagent and the right packaging plasmid, you’re ready to make virus! But now we come to the most important factor in virus production: the transfer plasmid itself.

All lentiviral transfer plasmids are not created equal. One of the main factors influencing virus titer is the length of the sequence between the two HIV-1 LTRs. Yield decreases steadily and predictably as the packaging sequence gets longer. For example, if your transfer plasmid contains a short promoter driving a small transgene such as a fluorescent protein, you are quite likely to see good titers. In contrast, if you are trying to make virus using a transfer plasmid with several transgenes, multiple promoters and elements such as IRES and WPRE sequences, your virus titer will be much lower. 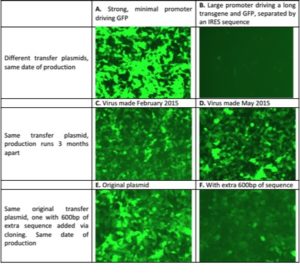 Therefore, promoter choice can also cause titer variations depending on how you assess transduction. Fluorescence-independent methods such as drug selection, qPCR and RT-qPCR can be used instead but they are usually more expensive and labor intensive. Photo 1B illustrates an issue that can confound your virus titer calculations. Fluorescence microscopy is a quick, simple and cheap way to measure transduction, but protein expression levels will influence your calculations. For example, fluorescent protein expression may be reduced by as much as 80% if the encoding gene is placed downstream of an IRES sequence. In this situation, you may have plenty of virus transduction but if the fluorescence signal is weak, you risk underestimating virus titer. FACS is generally more sensitive than microscopy but weak fluorescence can still cause underestimation of titer.

The take home message here is to avoid focusing on small tweaks that result in you spending excess time and money unnecessarily. The transfer plasmid is usually the biggest factor controlling titer so there’s not much point obsessing over optimizing steps resulting in a 10% improvement in titer if your transfer plasmid is reducing yields by 50%.

Before beginning virus production, plan your experiments and calculate how much virus you need. In vitro experiments often don’t require very concentrated virus, so there’s no point aiming for very high titers if you don’t actually need them. Bigger isn’t always better! Obviously it’s best to have good transfection levels but your cells probably won’t thrive if you bombard them with an MOI of 1000. Be realistic.

If your virus preps just aren’t producing enough for your planned experiments, consider re-cloning or redesigning your transfer plasmid. It may seem like an unnecessary detour but it could save you time, money and sanity in the end!