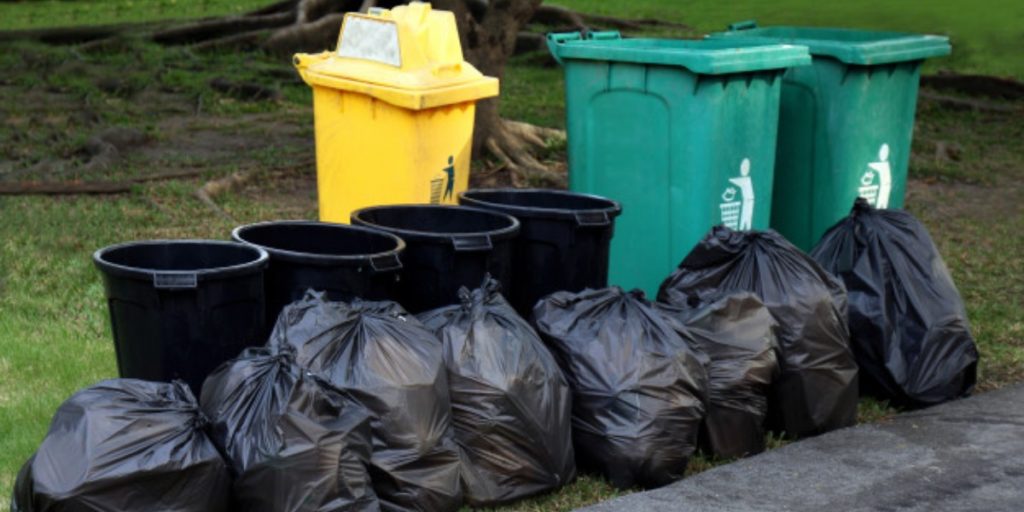 The basic idea behind autophagy is that in the absence of external sources of food, the body begins to eat itself, destroying and recycling its own damaged cell bits and proteins, so that new and healthy versions can be built. Autophagy is believed to be essential for helping protect against diseases like cancer, dementia, and infections, among others. In this article, we discuss the whys and the hows to measuring autophagic flux

The Difference Between Autophagy and Autophagic Flux

So, what is autophagic flux? Whilst autophagy is the name of this degradation pathway, autophagic flux is the measure of the degradation activity of this pathway. Essentially, how well the trash is delivered and how well the compost heap breaks down the trash. This process is crucial for maintaining energy balance and keeping cells alive. Therefore, a problem in the autophagy pathway and a decrease in the autophagic flux (when the trash bag isn’t getting delivered to the compost quickly enough, for example) can lead to disease.

A photograph is a static instant in time, not telling you much about what happened next or before. Similarly, taking a static measurement (like a snapshot in time of a single moment) of a biological sample will not really inform you of the state of autophagic flux. For example, a researcher might want to measure the number of autophagosomes that are in their biological sample of interest. They count them and see that there is an increase in the number of autophagosomes.

How do you think they should interpret that result? An increase in autophagosomes might mean there is more trash to collect and deliver to the lysosome. But it also could mean that there is a problem delivering the trash to the lysosome, so the autophagosomes are stuck holding all the trash and cannot get rid of it! This is why it is important to measure autophagic flux, and not just take a snapshot of autophagy in one moment in time. By using the following methods that have been developed for measuring autophagic flux, the researcher in this scenario would be able to conclude the reason why autophagosomes had truly increased in their experimental samples.

One possibility is measuring autophagic flux by traditional western blotting that quantifies a protein of interest in your sample. LC3-II is a protein that is found on all autophagosomes (think of LC3-II as a little tag on your trash bag, marked to be delivered to the compost) and, once the autophagosome fuses with the lysosome, on autolysosomes. Therefore, LC3-II can be measured to understand changes in autophagosome and autolysosome numbers. However, you soon run into the same problem as before; if there is an increase in LC3-II, is that because there is an increase in the trash or a problem delivering the trash to the compost?

To overcome this, researchers compare the levels of LC3-II in two different treatment conditions; untreated samples vs. samples treated with drugs that block the autophagosome delivering the trash to the lysosome, known as lysosomal inhibitors. By blocking the delivery of the trash, and the fusion of autophagosomes with lysosomes to form autolysosomes, this will lead to a build-up of autophagosomes, and therefore LC3-II.

To help illustrate this, I have continued the trash bag analogy in Figure 1. You can see in scenario one, with the addition of a lysosomal inhibitor, depicted as a wall, there is an accumulation of trash bags (autophagosomes) as they cannot deliver the trash to the compost (lysosome). This would represent normal autophagy biology.

In scenario two, however, there seems to be less of an accumulation of trash bags even with a wall blocking them. This would suggest that there are not as many trash bags being delivered to the compost in scenario two. In the context of the autophagy pathway, this would reflect a decrease in autophagosome production, relative to scenario one.

In scenario three there is a large amount of trash bags even without the wall, and the addition of the wall does not seem to change that trash bag number much. This would suggest that there is already something preventing the trash from being delivered to the compost. This implies that there is a dysfunction in the autophagy pathway that is preventing autophagosomes from fusing with the lysosome and therefore a decrease in its content’s degradation.

This analogy can be used to monitor changes in LC3-II levels in the presence or absence of lysosomal inhibitors (the wall, in our analogy) to determine the state of autophagic flux in your samples of interest. 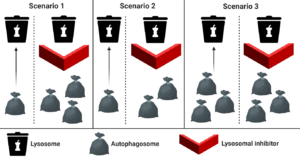 What to Do When You Cannot Build a Wall?

In some experimental setups, it will not be possible to use lysosomal inhibitors. For example, lysosomal inhibitors are highly suitable for in vitro studies i.e. directly added to cells in a dish. However, what if you wanted to monitor autophagic flux in vivo e.g. in a whole, intact organ or system, such as a brain slice? In these instances, administering lysosomal inhibitors to a whole organism may not be appropriate.

When LC3 is on the autophagosome, which is less acidic, both GFP and RFP can be visualized and therefore will appear yellow. However, once the trash has been delivered to the lysosome, the GFP signal will be lost and LC3 will appear red. Thus, monitoring the yellow vs. red signal allows researchers to assess the progress of LC3 through the autophagy pathway and, therefore, autophagic flux. This assay can be achieved by introducing GFP-RFP tagged LC3 via viral transduction in your system/organ of choice e.g. intracranial (within the skull) injection for expression in the brain.

The methods used for measuring autophagic flux are continually growing and improving. Therefore, it is important to have up to date guidelines [1, 2] at hand as well as tips and tricks for optimizations and troubleshooting. [3] Best of luck!

Share this to your network:
TwitterFacebookLinkedIn
Written by Rebecca Wallings