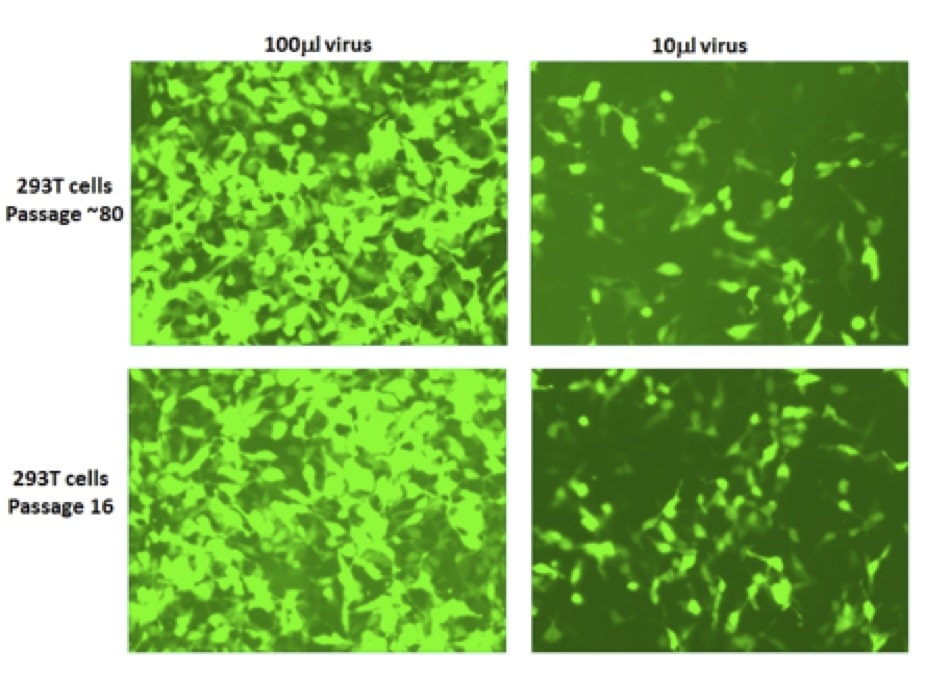 Producing lentiviral or retroviral vectors is theoretically fairly straightforward. However, anyone new to viral vector work is usually confronted with vast amounts of confusing information. It seems that anyone who has ever made a lentivirus has their own protocols and is adamant that their method is the best one to follow.

In reality, there are several important factors in lentivirus production that can be optimized to produce the maximum virus titre. The first place to start? Your 293T producer cells.

What are these cells you speak of?

The background of the original HEK-293 cell line is well described. Wikipedia will inform you that embryonic human kidney cells were transformed with sheared adenovirus DNA back in the 1970s to produce the HEK-293 cell line. HEK-293T cells were further modified to express the SV40 large T antigen to allow improved replication and expression of transfected plasmids containing the SV40 origin of replication. These cell lines are commonly referred to as 293s or 293Ts.

On the face of it, 293Ts in particular are very hardy cells. They don’t require specialized media and tend to grow predictably, usually doubling every 24 hours. Despite this, they are very susceptible to neglect and abuse. This article will outline how to keep your 293Ts happy, healthy and in tip-top, virus-producing condition.

A myth about your cells

A common piece of advice offered online is that 293T producer cells must not be above a certain passage number or the virus titre will drop. A quick Google search finds protocols stating that cells must not be older than passage 5, 10, 20, 30 or simply that the passage number should be ‘low’. Presumably, these numbers would designate a frozen cell stock purchased from somewhere like the ATCC as passage 0.

But before you panic and discard your stocks, there’s something important you should consider: the way you treat your 293T cell line is at least as important as the passage number when it comes to lentivirus production.

To illustrate my point, the picture below shows cells infected with a lentivirus expressing turboGFP under an EF1a promoter. The virus was produced in two 293T cultures: one had been maintained for 16 passages, the other for approximately 80 passages. Virus titre was assessed using fluorescent cell counting, and there was no significant difference in the number of fluorescent cells. That is, 293Ts that had been cultured for over 9 months showed no significant reduction in their ability to produce lentivirus.

Almost anyone with cell culture experience knows how to keep mammalian cells alive. However, all cell lines are not equal – what works for one cell line will not work for another. Maybe you’ve never dealt with 293Ts before. Maybe you’ve just been informed by your Professor that you need to learn how to make lentivirus from scratch. Maybe you were originally taught how to do cell culture by a hungover grad student who may have missed a couple of details.

Perhaps that was just me.

Regardless, being slapdash with any cell culture work is a sure-fire way to create inconsistency in subsequent experiments. In the words of Glinda the Good Witch, it’s always best to start at the beginning.

A picture tells a thousand words

First, you need to know what healthy 293Ts look like. You’re looking for a fairly even distribution of cells across the flask or plate with no clumps or overcrowding. These cells are in quite good shape:

There are hardly any dead cells floating in the media, the cells are sitting flat on the plastic and there are no obvious clumps.

For transfection with PEI or a commercial lipid-based reagent, your 293Ts should be 90-95% confluent at the time of transfection. These cells are approaching confluency but still look healthy and happy, and should transfect well:

In contrast, these 293Ts have not been treated well. Note that the cells are growing in isolated clumps and not spreading out evenly across the surface of the culture flask.

If these cells are allowed to continue growing, they will not return to a healthy population. They will tend to grow in an uneven fashion with dense clumps, and multinucleate giant cells may appear. Even after two more days in culture, the cells in this particular flask did not return to a normal, healthy appearance:

Note the dense cell clump at the bottom left of the picture and the uneven distribution of cells. It doesn’t matter how many times you passage these cells or how careful you are in the future – they won’t be very good for transfection or virus production. Throw them away.

Now that you know what you’re looking for when you peer down the microscope, how should you care for your 293Ts?

The 293T cell line grows in DMEM media supplemented with 10% fetal bovine serum. Make sure you keep track of your serum lot numbers, as changes in commercial serum batches may cause variation in virus titres.

Ideally, you want to passage your cells when they’re 70-80% confluent. I split my 293Ts twice a week, on Mondays and Thursdays (note that this schedule avoids coming in to the lab on weekends. Work-life balance, people! Embrace it).

To split your cells, remove the culture media from your cells, gently wash with PBS then add trypsin. Don’t pipette liquid straight onto your cell monolayer – you want your cells to detach slowly and delicately, not in miserable chunks. Let your flasks stand at room temperature for 2-3 minutes, then gently lift the flask to check them. When cells are just starting to visibly detach at the sides of the flask they are ready to go, so keep a close eye on them. Don’t wait until the whole cell monolayer has detached and is sloughing off the base of the flask. Don’t wander off to have a coffee or check Facebook.

When the cells are ready, don’t whack, tap or otherwise disturb the flask. One more time for the cheap seats – DO NOT attempt to dislodge the cells by force. If your cells are not detaching after a few minutes, then they are either overconfluent, clumping, have been poorly treated in the past or are just generally in bad shape. If you’re dealing with a recently thawed cell stock then feel free to blame whoever froze them down, especially if they no longer work in your lab.

Next, you’ll need to neutralize the trypsin using a volume of media equal to or greater than the amount of trypsin you added. Tip the flask up so that all the liquid falls to the bottom corner and add your media there. Now, pipette your trypsin-media mix directly onto your cell monolayer. Don’t blast the cells off the plastic, they should detach easily. If you’re using a bigger flask (eg a T-225), add the trypsin-media mix to one third of the monolayer at a time. The idea here is to deliver serum to each cell as evenly and quickly as possible – this helps to prevent cell clumping. Mix your detached cells gently by pipetting up and down a few times then dispense into new flasks with media already added. The media doesn’t need to be pre-warmed and you don’t need to spin off the trypsin. Ain’t nobody got time for that.

The moral of this story?

If you treat your 293Ts well, you will be rewarded with a healthy, happy cell population. Clumpy, abused cells will not transfect efficiently and if you use them to produce virus, the titre will most likely be poor.

In contrast, there’s no reason why 293Ts will not produce virus consistently for as long as they are well-maintained. It’s worth noting here that the 293 cell line is much more susceptible to the effects of age and high passage number than 293Ts (Ausubel 2012), which is possibly why some lentivirus protocols place a very high importance on using low-passage producer cells.

Be nice to your cultured cells, fellow scientists. They will love you in return.

Share this to your network:
TwitterFacebookLinkedIn
Written by Jill Muhling