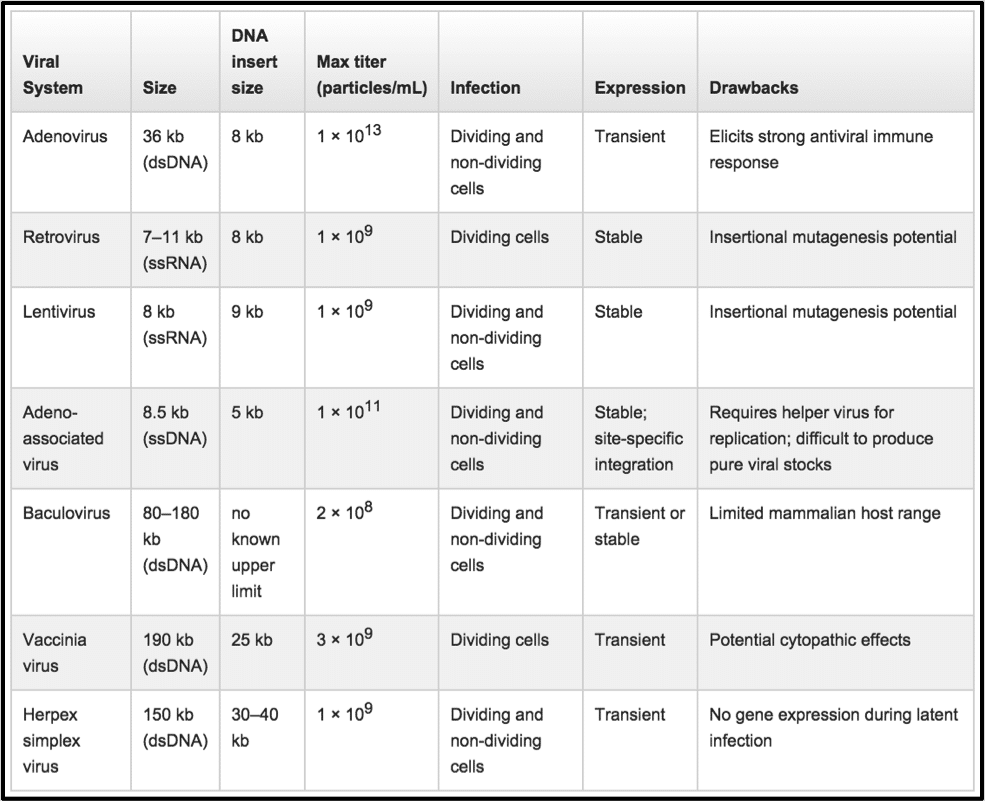 Some viral vectors are the little black dresses of cloning and expression experiments: They work for almost any occasion and always give you the results you were hoping for. Other vectors are more like ballgowns that only come out of storage for special occasions. Let’s wade through all the information out there and take a quick but ample overview of what viral vectors are and which ones are used for what.

What is Viral Transfection?

Transfection is a lab technique whereby nucleic acids or proteins are introduced to a cell or cells. When viruses are used to facilitate this introduction, the process is called viral transduction or more correctly viral transfection. A wide variety of viruses are used for this purpose, but the two most ubiquitously utilized are adenoviruses and lentiviruses.

There are many experiments for which viral transduction are useful, including gene knockdown/gene silencing, protein overexpression, stem cell reprogramming and differentiation, cell line generation, virus production, and gene knockout and knockin[1]. Conveniently, this form of transfection is amenable to in vivo or in vitro applications.

The General Properties of Viral Vectors

Viral vectors vary in their efficiency and toxicity and each are ideally suited to different applications but they share common traits[2] that differentiate them from viruses not suited as vectors:

Owing to the deletion of the component of the viral genome critical in viral replication, viruses will not reproduce uncontrollably. A helper virus can be used as a companion to facilitate replication if desired. There is some concern over insertional mutagenesis leading to cell malignant transformation of cells and tumor development however.

If a minimally toxic viral vector is chosen, it has very low effects on the physiology or the cell housing the product of the transfection. Some cell lines are more cytotoxic than others, so care needs to be used when selecting your viral vector.

This allows for confidence that the virus will not mutate and affect the reproducibility of an experiment but limits the selection of viruses that are appropriate for such experiments.

4. They can be broadly targeting or highly cell specific.

You can target a specific cell type or a group or open the floor up to a range of cells. This gives you a lot more flexibility in your experimental design and increases the applications of this technique.

5. Selection markers can be used.

Various properties such as virus size, insertion size, expression, and max titer should be considered when deciding which cell type to choose. This wonderful chart from Life Technologies shows how each of the more common viral vectors has its own advantages, best suited applications and problems.

Some other considerations here are in the table below:

Do you have a favorite viral vector your genes like to get to work in?