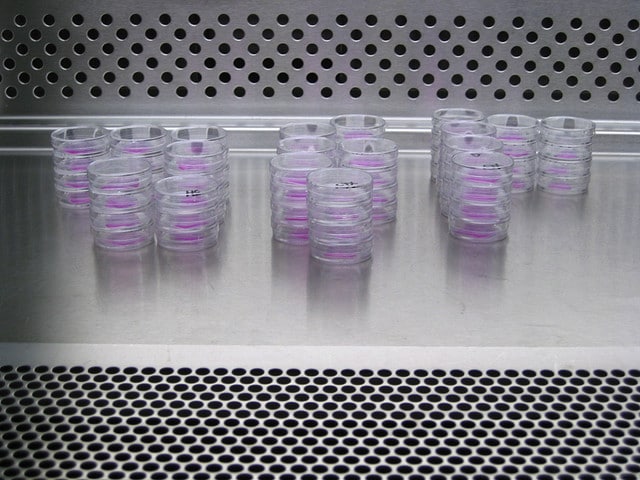 While working in a UK university, I met a researcher who loved Italy much more than the UK. I asked her why she had left her favourite country. She told me that before coming to the UK, she had a 2-year fellowship in Italy where she was getting some promising results and had the chance of extending her contract. However, at the end of the second year she discovered that a technician had managed to contaminate her cell lines with HeLa. All her results were null and void, she did not publish, her fellowship was not extended and she had to find a new job.

Moreover, the problem of cross-contaminated cultures happens not just to “another one bites the dust”, nameless researcher in a forgotten European institute. Discover magazine reported a case involving Kenneth Ain, director of the thyroid oncology program at the University of Kentucky at Lexington, where 17 out of 18 KAT (Kenneth Ain Thyroid) cell line stocks were not what they were supposed to be.

How Common is Cross-Contamination?

Unfortunately, cell culture cross-contamination is not uncommon. According to different sources,1–6 between 15% and 30% of all cell lines are not what they should be. This misidentification extends not just to a vial with the unreadable label you got from a Ph.D. student in the neighbouring lab but includes a few of reputable cell culture repositories and commercial sources.

Contamination by the first, and still widely used, immortal cell line HeLa was discovered first, several decades ago (for details see the excellent book by Rebecca Skloot, The Immortal Life of Henrietta Lacks or at least our article about it). The very HeLa trait made it possible to cultivate cells in relatively primitive conditions in labs of the 1960s, its robustness plus negligence of good aceptic practice, lead to HeLa contaminating and outgrowing many less fit cell lines.

At the moment researchers are aware of HeLa danger and contamination since it is probably the easiest case of mistaken identity – you can easily see a weed among your flowers. However, if your endothelial cell line is in fact a melanoma, or your human cells are in fact murine, you may never detect it just by looking at them, as morphology could change because of environmental factors such as the specific media batch.

Why is Reducing Cross-Contamination Important?

Working with the wrong cell or contaminated cell line would be a waste of time, effort and money. It is in your interest, the interest of your entire group and the interest of your supervisor to check all of the cell lines that you are starting to work with, and ideally, the whole cell culture collection. More and more journals, including the International Journal of Cancer, require a certificate of authentication for the cell lines used to generate data for the submitted manuscript, which means that you should check for contamination at the earliest possible stage; You don’t want to be near submission of your paper only to find out your cell line isn’t what you think it is

How to Check Your Cell Culture

Is one of the most widely used methods of human cell lines identification. STRs of the chromosomes are amplified, hybridised with fluorescent probes and run on a gel. Each cell line has a characteristic profile, many of which are listed in cell culture repositories. International Cell Line Authentication Committee published guidelines for STR typing and although the kits are available (starting at $20), the committee does not recommend doing this in-house unless you do it routinely. A number of the main cell culture collections ­– American Type Culture Collection (ATCC), German Collection of Microorganisms and Cell Cultures (DSMZ), Japanese Collection of Research Bioresources (JCRB) and Cell Bank RIKEN BioResource Center ­– co-operated and created a searchable and interactive database of STR profiles.

…during metaphase with chromosome painting and subsequent analysis by software. This technique analyses the number of chromosomes, their arrangement, size and structure in the dividing cells, e.g. their karyotype. Usually used to detect chromosome abnormalities, karyotyping allows you to also identify the species of your cells, and in most cases the exact cell line, because cancer cell lines often have specific abnormalities in their karyotype.

Common metabolic enzymes, such as glucose-6-phosphate dehydrogenase and lactate dehydrogenase, differ between species by size, shape, and isoelectric focusing point. Often a species has different isoforms of the enzyme (hence izoenzyme). Electrophoresis produces an enzyme isoform pattern, which after comparison with reference samples allows you to distinguish between species or even cell lines – for example HeLa has a characteristic profile.

Amplification of genes for example aldolase gene family or betaglobine. The genes vary between the species in gene lengths, number of introns, variations in sequence of intron/exon junction, as well as presence of pseudogenes. PCR amplification of reference genes and their subsequent sequencing allows distinguishing between species.

Detects variation in length within minisatellite DNA, which contains a variable number of tandem repeats. this method generally uses probes 33.15 and 33.6 or M13 phage DNA. This method allows you to distinguish individual lines across species, but it requires performing a Southern blot.

Do you have any horror stories of misidentified cells? Leave us the details in the comment below.

Share this to your network:
TwitterFacebookLinkedIn
Written by Vicki Doronina
Image Credit: niceness