You likely know your way around a light or confocal microscope, but what if you need to see outside the optical range of these microscopes? Enter: Electron microscopy. Electron microscopes or EMs can increase magnification by 1000 times more than that of a light microscope. Crazy, huh?! And that isn’t even the half of how powerful and complex these machines are…prepare to be enlightened.

In contrast to light microscopes that (you guessed it!) use light to illuminate, EMs use an accelerated particle beam of electrons as their source of illumination. And because the wavelength of an electron is up to 100,000 times shorter than that of visible light photons, EMs have a higher resolving power than light microscopes. This allows you to reveal smaller objects. All EMs use electromagnetic and/or electrostatic lenses to control the path of electrons and focus it to form an image. The electron beam, on its way down the microscope column towards the sample, passes through a coil of wire. A current is passed through this wire to induce an electromagnetic field. And since electrons are very sensitive to magnetic fields, this current can be used to precisely control the electrons path. Allowing you to magnify objects up to two million times!

The Transmission Electron Microscope (TEM) is the original form of electron microscopy. The TEM was developed in 1931 and is based on transmitted electrons. Here, a high voltage electron beam is emitted by a cathode and controlled by magnetic lenses. This electron beam is then partially transmitted through a very thin specimen. And I mean very thin! So thin that electrons can pass through it!, The beam is subsequently diffracted by the specimen. Then the EM’s lenses re-focus the beam into a Fourier-transformed image of the diffraction pattern for the selected area of investigation. In other words, in TEM an electron beam is used to carry information about the structure of the specimen and the spatial variation in this information (i.e. the “image”), which is then magnified by a series of magnetic lenses until it is recorded on a special photographic plate, or viewed on a detecting screen. TEMs are typically used for viewing internal features that are inside or beyond the surface (e.g. organelles, macromolecules, atoms). TEM images are subsequently shown as a whole. Limitations of TEMs are that they produce two-dimensional, black and white images; and that your sample cannot be living. The latter is because, among other things, the processing needed to cut your sample into 10 nanometers is harsh.

TEM of Bacteriophages. Reproduced with permission from https://www.flickr.com/photos/zeissmicro/

The SEM was created in 1942. Unlike the TEM, at no time does a Scanning Electron Microscope (SEM) carry a complete image of the specimen. Where in TEM the electrons in the primary beam are transmitted through the sample, SEM produces images by detecting secondary electrons that are emitted from the surface due to excitation from a primary electron beam. In more detail, SEM works by rapidly scanning your sample with a focused electron beam. This causes electrons to be knocked off the surface of your sample. These secondary electrons provide signals carrying information about the properties of the specimen surface, such as its topography and composition. And it is these secondary or backscattered electrons that are picked up by a detector and are used to produce your image. Because of the way it works, SEM focuses on the sample’s surface and its composition and shows the sample bit by bit though scanning. Things you can see with a SEM include the surface of a housefly’s eye, human inner ear hair cells, or elements on the head of a pin. Similar to the limitations of TEMs, SEMs yield only greyscale images and it is not possible to observe living specimens as the entire system must be in a vacuum in order for the image to be formed. However, on the plus side, since the SEM image relies on electron interactions at the surface rather than transmission, it is able to image thicker samples and has a much greater depth of view. Hence, SEM images are three-dimensional giving more accurate representations than TEMs. 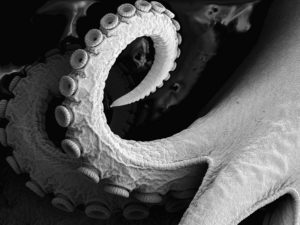 Similarities between TEM and SEM

Although I have highlighted their vast differences above, TEM and SEM do actually share some similarities to consider:

So in summary, I leave you with a table that gives a quick side-by-side comparison of these two major types of EMs.  Thanks for reading!

Share this to your network:
TwitterFacebookLinkedIn
Written by Liselle Bovell