Every biologist is familiar with the profile of the rate of an enzymatic reaction versus temperature as shown in the figure. We know that enzymes from E. coli or warm-blooded animals tend to have an optimum around 37°C, while those from thermal vent bacteria have much higher optimal temperatures. Surprisingly, I find that many biologists don’t have a grasp of why enzymes have these temperature profiles. Actually it’s reassuringly simple. 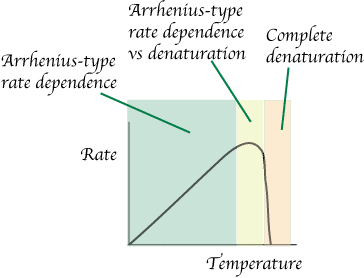 The reaction rate begins to plateau then fall in the yellow highlighted section of the graph. This is due to the temperature approaching the point at which the enzyme begins to denature (and therefore lose activity). At even higher temperatures (the darker yellow section) the enzyme is fully denatured and no activity remains.

The temperature at which denaturation occurs is dependent on the structure of the enzyme, which in turn is related to it’s evolutionary origin. Thus, E. coli enzymes have evolved to cope with temperatures of around 37°C, while enzymes from thermal vent bacteria have been forced to evolve in such a way that they can remain stable at far higher temperatures (yay for PCR!).

So an enzyme’s optimal temperature is a trade-off between the Arrhenius-type dependence on temperature (the hotter the reaction, the faster the rate) and the instability of the enzyme as it approaches, then reaches, it’s denaturation temperature.