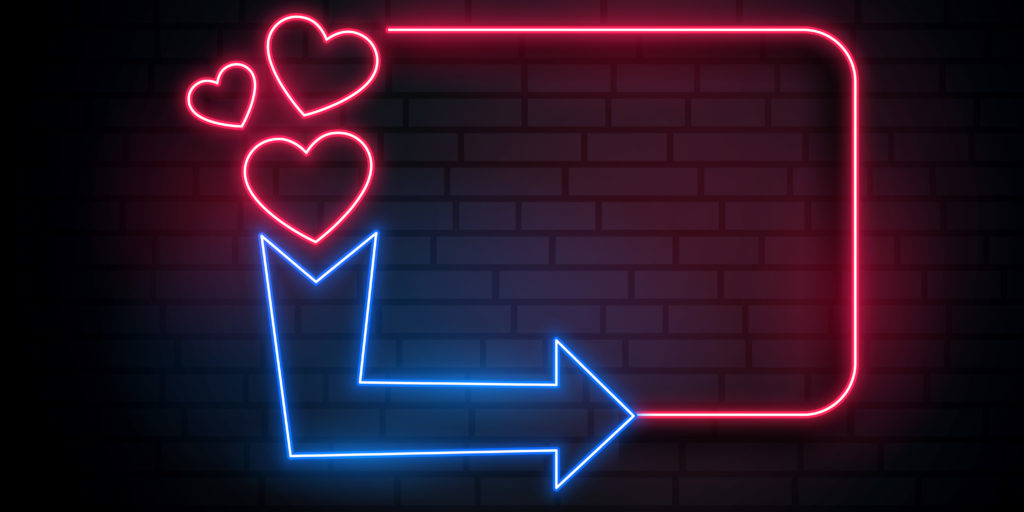 Cell Biology is entering the Age of Light with a spectrum of new optogenetics tools available to control protein function using light. Once the remit of neuroscientists [1], the past decade has yielded a bounty of novel light-controllable domains that are now being leveraged to illuminate the dark corners of basic cell biology [2,3]. The following comes from my own experience in optogenetics and provides a set of tips and tricks for setting up a system with the Light Oxygen Voltage 2 (LOV2) domain.

There are a few main reasons that you may wish to implement an optogenetic system over the more classical genetic manipulations or pharmacological perturbations. The rapid reversibility of light-controllable proteins means that you can turn signaling pathways on and off at the literal flick of a switch, avoiding the pesky pathway subversion or normalization seen with genetic knockouts, knock-ins, and knockdowns. Implementation of light-controllable proteins in parallel to the endogenous signaling pathways in a time-dependent manner also minimizes the off-target effects common to drug treatment regimes. Ultimately, optogenetics can provide an unprecedented degree of spatiotemporal precision in manipulating cellular activity.

The LOV2 domain is probably the most beginner-friendly optogenetic tool. This is a domain common in plant and fungal light-signaling proteins, with the variant most widely used in optogenetics derived from phototropin-1 of Avena sativa, the common oat [4]. At ~140 amino acids in size, the LOV2 domain is less likely to cause steric inhibition than some of its larger counterparts. Also desirable is the fact that LOV2 relies on a flavin mononucleotide (FMN) cofactor, which is endogenously expressed in mammalian cells. This is important as other systems require the exogenous supplementation of cofactor to the media or extensive genetic alterations to the cell line of interest. Furthermore, the light-response mechanism of LOV2 has been extensively characterized, so tuning the system to your needs is quick and easy [5,6].

Optogenetic tools can be broadly categorized into two classes based on their mechanism of action: photocaging or light-inducible oligomerization. 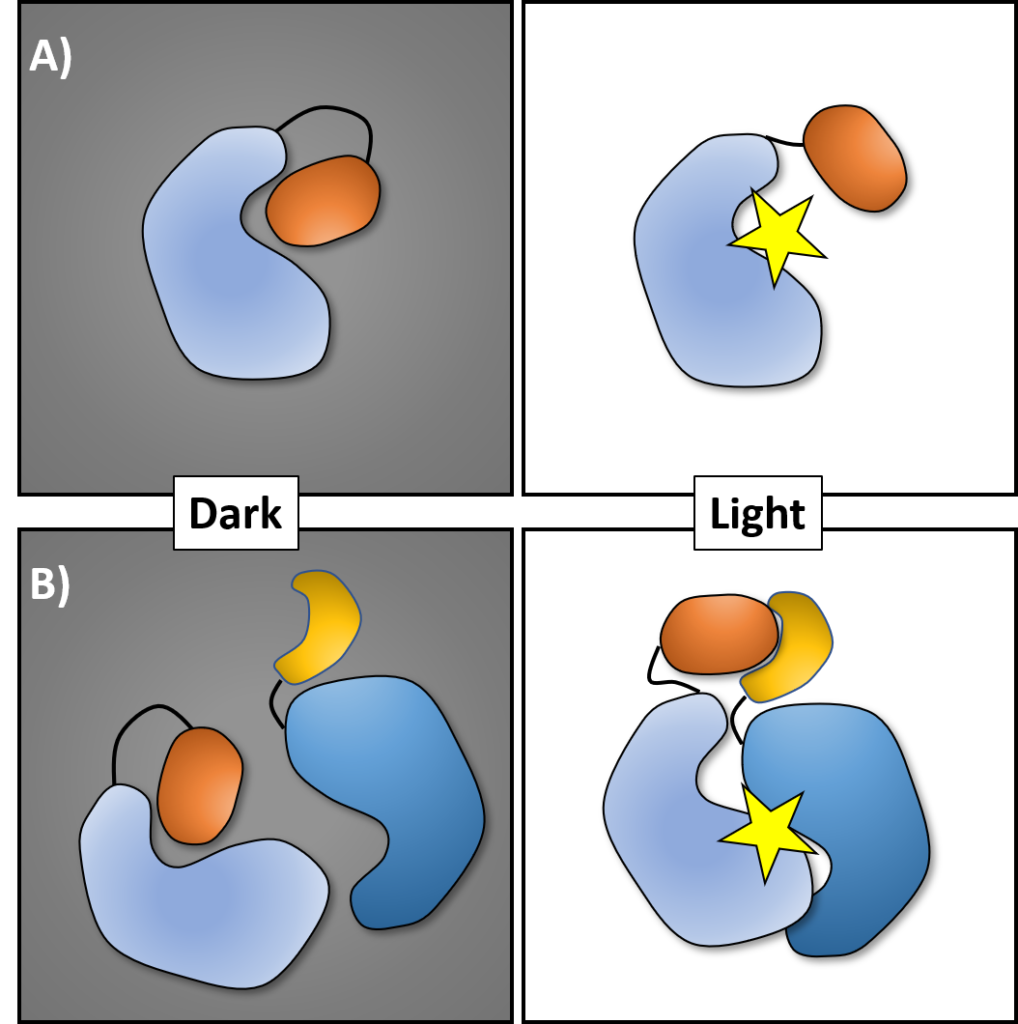 Figure 1 Optogenetic systems function via two main mechanisms. A) Photocaging selectively inhibits protein functionality in the dark state and releases inhibition on exposure to light. B) Light can be used to drive the interaction between the optogenetic domain and a binding partner.

Photocaging allows you to toggle protein activity on and off, by using the optogenetic domain to sterically block the functional capacity of a protein of interest (POI) (Figure 1A). This may include the caging of a domain regulating protein localization, such as a nuclear localization or export sequence [7], or an enzymatic active site, for example in kinases [8].

If you want to study the interaction of two proteins, look no further. In this scenario, light is used to drive a protein-protein interaction between a POI tagged with the optogenetic protein and a second POI tagged with an interacting domain (Figure 1B). With regards to the LOV2 domain, this is best exemplified by Strickland et al.’s TULIPs system [9], which relies on photocaging of a PDZ binding sequence to mediate the interaction of target proteins under light stimulation. If you’re wanting to dissociate two proteins then the LOVTRAP system is what you need, as it functions in reverse with a domain specific to the dark state of LOV2 and light-driven dissociation [10].

When setting up your LOV2-based system there are a few things to consider.

Evolution clearly didn’t have optogenetics in mind when these photoresponsive domains arose because they react to a broad spectrum of light. This makes fluorophore selection for localization experiments tricky; if you don’t pick wisely, then your emission laser will trigger your system.

The LOV2 domain displays two absorbance peaks toward the blue light end of the spectrum [11]. This means that GFP and BFP are out as tags if you need to visualize the POI while also controlling the LOV2-domain. Also, don’t forget to use monomeric fluorophores if you’re doing oligomerization experiments. Red and far-red fluorescent proteins such as mCherry, mRuby3, or iRFP670 are good choices. The LOV2 domain itself emits at ~500 nm, which can be a handy label-free way to check system expression.

To Cage or Not to Cage?

Next, review the existing literature on your POI to determine the most suitable optogenetic mechanism to apply. For example, Is your target protein a kinase or a scaffolding protein? Where is it normally localized and does its function change with its pattern of localization? Are there any known interaction partners? Is there a

feature of the protein or signaling pathway that you are seeking to interrogate? Once you have determined the known functional characteristics of your POI you can determine if a photocaging or light-mediated association (or dissociation) approach is going to be most suitable for your system.

Be Aware of Background

It is important to recognize that there is going to be a degree of background activity in your system. Simply put, the system is never 100% on or off. A number of well described mutations that alter the activation kinetics (Table 1) can be used to improve the signal-to-noise ratio in your system. Optimizing protein expression can also help clean up your experiments. To speed up the fine-tuning process, aim to run your mutation and expression level experiments in parallel.

Table 1: the effect of point mutations on the rate of LOV2 domain dark-state reversion

Print Your Own Hardware

Finally, 3D-printable, open-source hardware plans from the Tabor lab provide a means for designing plate-based optogenetic assays. I would, however, recommend making a frosted acrylic plate adapter as the use of photo paper results in uneven illumination. This approach can be much higher throughput than a microscopy-based method, though the use the Fiji Plugin, μManager, can be used to customize imaging protocols.

This information should give you a good place to start when it comes to implementing the LOV2 domain in your optogenetic experiments. Now that you have a sense for how to set up an optogenetic system, you can go forth and seek the light!

Share this to your network:
TwitterFacebookLinkedIn
Written by Michael Harris
Image Credit: Starline