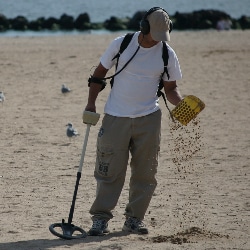 Apoptosis, or programmed cell death, is a physiological process in which individual cells are set to die without harming their environment. It involves a cascade of complex and tightly regulated cellular events. Detecting apoptosis on tissue slides, involves either detecting the molecular participants of these events, or the morphological changes that occur on the cellular level. If you have lots of old archival material, you will find that it is an easily accessible wealth of information for studying cell death. Therefore, I am giving you an overview on what you can do to pinpoint the suicidal cells caught while passing away on your tissue section. May they rest in peace.

Cells that are dying via apoptosis, develop distinct morphological features, many of which can be detected with common histological stains such as haematoxylin-eosin. Dying cells are usually round or oval, with condensed and eosinophilic cytoplasm, tightly packed organelles, and dense purple chromatin fragments marginated at the nuclear membrane.

At first glance, these cellular characteristics would seem to be enough to guarantee you a fast, reasonably reliable, and inexpensive technique for detecting apoptotic cells. However, this is not the case. One detects only low numbers of apoptotic cells using such criteria. Furthermore, the approach appears to underestimate the rate of apoptosis by 2-fold to 3-fold.1

This is partly because the changes you see, represent later stages in the process, that are the result of complex molecular crosstalk. Thus, light microscopy often misses the molecular hints of apoptotic onset. The method also proves to be prone to inter-observant variations and is highly dependent on magnification. It is advisable to have several people exam multiple fields with a high-power lens. Yet these steps make the process tedious and time consuming.

Nevertheless, morphological criteria in combination with more specific methods that identify cells earlier in the apoptotic process, improves detection. Keep in mind, that morphology with routine staining methods, remains the gold standard for the validation of new techniques. For more specific methods see below.

Immunohistochemistry likes to detect proteins, and is a handy tool for finding apoptotic biomarkers. The proteins to identify can be apoptotic inducers, executors, or unique byproducts. Here are a few candidates that already have commercially available antibodies targeted against them:

Active Caspase-3 is the superstar of apoptotic executers. It is a protease active only when the cell is targeted to die, cleaving and activating other caspases and endonucleases, in a cascade leading to self-destruction. Caspase cleavage, in turn, produces neoepitopes suitable for detection by immunohistochemistry. An example is a neoepitope in cytokeratin 18, termed M30, which becomes available early during apoptosis. Another example is PARP (poly ADP-ribose polymerase), a nuclear protein that appears to function in DNA repair.

Another popular protein marker is p53, a tumor suppressor gene coding for a transcription factor that activates vital damage to the cell in response to abnormal proliferative signals and stress.

Last but not least, Endonuclease G is a choice for studying caspase-independent apoptosis. It degrades DNA upon translocation from the mitochondrion to the nucleus. IHC detects the enzyme in the nucleus.

Picking the appropriate antibody depends, among other things, on the stage of apoptosis you wish to study. The early markers of apoptosis are lost in the late stages, while the late markers are not present at the onset.

The type of tissue you use also needs consideration. The M30 antibody recognizes cleaved cytokeratin 18 and is therefore limited to epithelial tissues and certain types of tumors. You also shouldn’t use antibodies specific to active caspase-3 for tissues under prominent inflammation, as granulocytes are often positive to it.

TUNEL (terminal deoxynucleotidyl transferase dUTP nicked labeling) detects DNA cleavage which is among the earliest hallmarks of apoptosis. It works by adding labelled nucleotides to the free 3’-hydroxyl ends of DNA breaks. This reaction is in situ catalysed by a terminal deoxynucleotidyl transferase (TdT). Following the enzymatic reaction, you can detect the newly incorporated nucleotides by immunohistochemistry.

There are a few disadvantages to this method. Its accuracy depends greatly on tissue fixation, pretreatment and the concentration of TdT. Overlong fixation may give rise to false negative results, while excessive pretreatment yields false positive ones. Also, TUNEL can label necrotic cells and cells undergoing extensive DNA repair.

Annexin V assays take advantage of the changes the plasma membrane goes through during apoptosis. The phosphatidylserine, which is typically on the inner leaflet, crosses to the outer leaflet and exposes itself on the cell surface. Annexin V is a protein with high affinity for phosphatidylserine. A number of assays use annexin V conjugated to a reporter to identify apoptotic cells.

Once again, false positives can come from necrotic cells. They have holes in their membranes Annexin V can slip through and bind to the inner leaflet.

So Which Method Should You Use?

The best thing to do is to combine them. Try to use the strengths of one method, to avoid the pitfalls of another. You should bear in mind the type of tissue you have, the stage of apoptosis you wish to study and the pretreatment your slides have gone through. And always watch out for those necrotic cells lurking around!