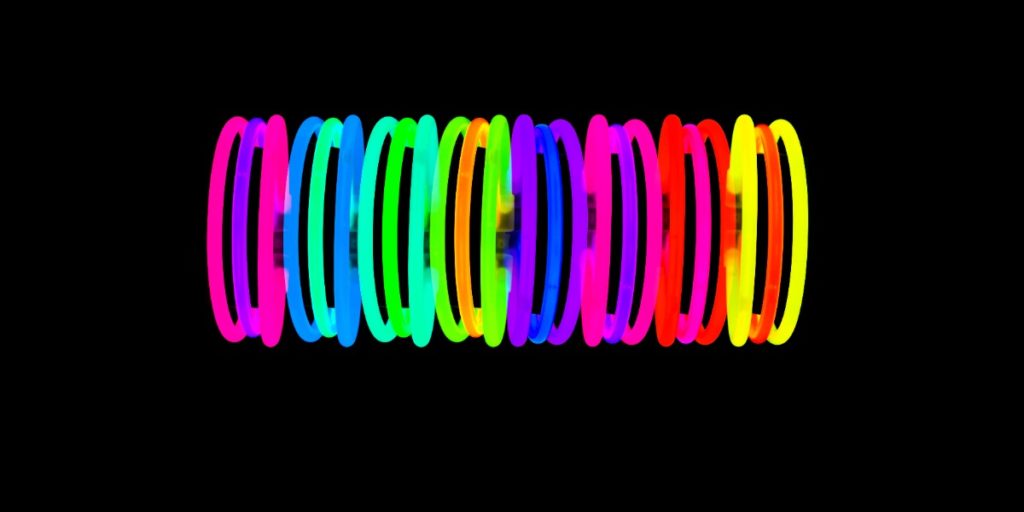 You may notice that nature is full of vibrant, even fluorescent, colors. The human eye detects wavelengths ranging from 390-700 nm and our perception of colors is actually a narrow part of the light spectrum. Other organisms can detect color from a wider spectrum.

Why do colors exist? Arguably, colors are communicative, from tropical fish mating signals to some frog’s poisonous warning colors to octopuses’ clandestinely hiding in plain sight. Compounds that can give off bright signals communicate tracking information to observing scientists. In the past 100 years, scientists have found myriad ways to use fluorophores to label and characterize proteins or cells of interest. Today, I would like to walk you through the history of fluorophores and touch upon a few essential considerations in choosing the right one for your experiment, especially when combining multiple fluorophores simultaneously.

A Short History of Fluorophores

Fluorophores, as the name suggests, are compounds able to emit fluorescence. The fluorescent chemical compound absorbs light at one spectrum and emits light at a different spectrum. A fluorophore, or fluorochrome, typically contains multiple aromatic groups with conjugated electron systems. When you look at a class of fluorophore—be it organic, synthetic oligomer, protein, or multi-component system—there are certain distinguishing physical characteristics.1 Every fluorophore has its own maximum excitation and emission wavelengths, which serves as a useful I.D. The “Stokes shift” indicates the difference between the maximum excitation and emission wavelength of a given fluorophore. On the other hand, the extinction coefficient indicates the quantity of absorbed light at a given wavelength. Another important parameter is the quantum yield, which gives you the efficiency of energy transfer from absorbed light to fluorescence.

Fluorescein has an absorption max at 494 nm and emission max at 512 nm.2 The best-known derivative of Fluorescein is probably Fluorescein isothiocyanate (FITC). It is a dark orange/red organic dye widely used in microscopy. Fluorescein can also be conjugated to nucleic acids for in situ hybridization. Figure 1 is a typical fluorescence microscopy image using FITC-labeled monoclonal antibodies.

A dye commonly used in applications like flow cytometry with similar excitation as FITC is Alexa 488.

Built upon the lessons learned from the first generation of fluorophores, second-generation fluorophores are often more photostable, brighter, and less pH-sensitive. The following two fluorescence compounds are found in nature and play an important role in photosynthetic light-harvesting!

Phycoerythrin (PE) is isolated from red algae! It is composed of a peptide covalently linked to phycobilin chromophores. It has an absorption max at 498 nm and emission max at 565 nm, giving off a bright red color.

Allophycocyanin (APC) is a protein from the light-harvesting phycobiliprotein family. It is an accessory pigment to chlorophyll. How cool is that? APC can be found in Cyanobacteria (blue-green algae) and red algae. It absorbs and emits red light at 650 nm and 660 nm, respectively. Because it is composed of multiple subunits of alpha & beta subunits (alpha + beta dimers), APC needs to be cross-linked before tethering to an antibody or your favorite protein

Tandem Dyes can be made by conjugating additional fluorophore compounds with either PE or APC. In this case, one fluorophore serves as the donor and the other as the acceptor. By carefully choosing the fluorophores for pairing, you are able to create unique emission spectra and, thus, increasing your color range. The most popular tandem dyes on today’s market are APC-Cy5 and PE-Cy5. You should be aware of tandem dye stability because the tandem dye could uncouple and result in unintended consequences (like high background fluorescence).

Quantum dots, or q-dots, are nano-crystals with amazing physical properties. Q-dots are made of semiconductor materials, and one of the remarkable features is that q-dot size determines the emission color (see figure below). Cool, huh? Size, not structurally complex fluorophores, is the only concern with q-dots. In addition, q-dots are brighter with a high extinction coefficient and good quantum yield compared to traditional organic fluorophores. Being composed of inorganic crystals, q-dots are also more stable, which means less photobleaching than traditional fluorophores. No wonder, then, that q-dots have become the new darling for many biological applications. Below is a picture showing that different size of q-dots gives off different colors (Figure 2).

Although technological advances in fluorophore design have steadily increased, current fluorophores still suffer from some common setbacks such as photobleaching, limited cell permeability and strong background autofluorescence.3 However, scientists are starting to look into near-infrared (NIR) absorbing synthetic molecules emitting in visible light ranges, termed “upconversion.” Theoretically, this would eliminate a lot of problems that I just mentioned.4 I can’t wait to test NIR when released!

To reiterate, one of the most important things, when you are running experiments using multiple colors simultaneously, is to pick your color palette carefully. Because of the potential emission spectrum overlap for each fluorophore, you need to choose those requiring the least amount of signal compensation for your machine. You can minimize the time it takes to tweak the machine and background color as well. In addition, if you using tandem-dyes, run extra quality controls before planning an experiment to ensure the dyes have not degraded. Also, make sure you go through instrument settings thoroughly to make sure it is equipped with proper lasers and optical filters for your experiment.

Science research would be “monochromatic and dull” without the creative use of these fluorescent compounds. Kudos to the creative minds!