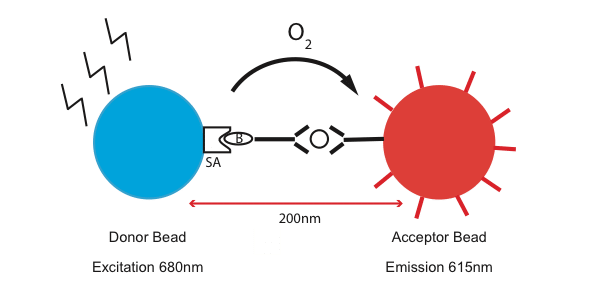 If you ever worked in a biology or biochemistry laboratory, you probably already heard about ELISA. You may have even used it. But do you know what’s behind it? And how you can improve it? Let me guide you through the basics of ELISA, and introduce you to my favorite ELISA technique—AlphaLISA.

So, what is an ELISA? ELISA stands for “Enzyme-Linked Immunosorbant Assay.” You can probably guess from the string of jargons above that the assay might involve some kind of immune-globulin linked to an enzyme for capturing of certain antigens? Bingo! That’s exactly what it is. ELISA is an assay developed to detect the presence of your “protein of interest”, or the antigen, using monoclonal antibodies. Read this article on the ELISA technique to learn more.

ELISA has been extensively used in many clinical applications, such as medical diagnosis.1 For example, an in-home pregnancy test essentially is an ELISA that detects the presence of human chorionic gonadotrophin (hCG) in the urine. In labs, ELISA is an indispensible technique when it comes to protein detection and quantitation. Compared to western blot analysis, the ELISA is high throughput and quantitative.

However, such an assay has several drawbacks… Imagine the time it takes to add liquid into a 96-well plate using a multi-channel pipet and repeating this 3 or 4 times in each step! In addition, you’re constricted to a particular “time window” to obtain your result, because even if you add a stop solution to halt the enzymatic reaction, the background noise will increase over time. Don’t worry, there is always a new way! In the next section, I will introduce you to a different kind of ELISA called AlphaLISA, which is based on a very different chemistry and physics. This technology will not only cut your traditional ELISA assay runtime in half, but it also works on other applications (such as detection of protein-protein interactions, screening of antibody pairs, and pin-pointing key components of the signal transduction pathways).

So, what’s so cool about AlphaLISA? It stands for “Amplified Luminescent Proximity Homogenous Assay.” Simply, it uses two different kinds of beads, one called the “donor” and the other one called the “acceptor”, to detect the closeness of an interaction. The streptavidin-coated “donor” beads bind biotinylated “capturing” antibodies that recognize a specific protein (Fig 1). The acceptor beads can be conjugated with secondary antibodies that also recognize the same protein, but in a different region. As a laser beam is shone on the donor beads, a singlet oxygen molecule is generated. This leads to an excitation and amplification of the fluorescent signal on the “acceptor” beads. Sounds simple right?

One of the biggest differences with the traditional assay is that AlphaLISA is a proximity assay. As you can see in Figure 1, the donor and the acceptor beads have to be within 200 nm of each other for the signal to get across and amplify. This makes AlphaLISA a great tool for studying protein-protein interaction.2 Another great thing about this assay is that it requires half the amount of time than the traditional ELISA because of a lower number of washing steps! AlphaLISA, a very versatile assay, can cover a wide range of protein sizes, from large endogenous proteins complexes to very small peptides.3  In addition, it works in a variety of sample types such as serum, plasma, cell lysates & supernatant.3

Step 2. Add biotinylated antibody that recognizes the protein. Also, add the antibody-conjutaged acceptor beads into the wells. Incubate for 60 min.

Step 4. Excite the donor beads with laser. The intensity of light emission is proportional to the level of interaction.

igure 1. How AlphaLISA Works As laser hits the surface of donor bead, Oxygen (O2) is generated. O2 then excites the acceptor bead, which produced an amplified light signal. Emission only occurs if the respective antibody on both donor and acceptor beads recognizes the analyte. Abbreviations. SA=Streptavidin, B=Biotin

As you can see, the chemistry behind AlphaLISA makes it more versatile than ELISA. Here are some of the applications:

I hope that are now convinced about how AlphaLISA is easy to use and highly versatile! Give it a try for your next experiment, and let me know in the comments how successful you were!