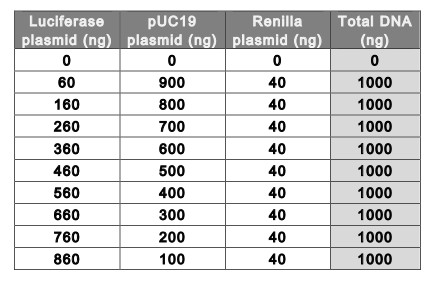 What is a luciferase assay and what is it useful for?

A luciferase assay takes advantage of the innate bioluminescent properties some organisms exhibit, most notably the firefly. The firefly can convert luciferin to oxyluciferin in the presence of the enzyme luciferase to emit light. The most common scientific assays utilizing luciferase are reporter assays in which transcriptional activation or repression can be tracked by measuring the light signal from the luciferase reaction. A great video introduction to reporter assays can be found here.

I highly suggest you use a dual-luciferase system in which a secondary bioluminescence reaction takes place. The second signal is emitted by another molecule. The most common is encoded by the renilla gene that can also bioluminesce (some plasmids already contain both renilla and luciferase genes, like pmirGLO by Promega). This allows you to normalize your luciferase expression to a control and measure your relative transfection efficiency.

Unfortunately, as with any experiment, things will always go wrong, here are some tips and tricks for common issues:

How to troubleshoot & what can go wrong:

Transfection: Some cells are also notoriously difficult to transfect. I recommend that with each cell line you use, you do a titration experiment with the amount of DNA and transfection reagent, like what is suggested by Hawley-Lawson and colleagues. Obviously, as your normalization control, the amount of renilla plasmid used should be constant throughout.

For example, to test different amounts of luciferase plasmid but keeping the total DNA the same, you could do something like this:

Time: You may be missing your window to visualize your effect. Cells are often assayed 24 – 48 hours post transfection, however this depends greatly on how long it takes the cells machinery to express your gene of interest. A time course to optimize your incubation time post-transfection would tell you the best time point at which to assay your cells.

Saturation: Although having a very high signal may be seen as a positive, you also want to ensure you are staying within the dynamic range of the assay and your luminometer and are not saturating the signal. If you have extremely high values, you are likely using too much DNA.

Promoter Strength: In addition, you may want to change the plasmids. If you are using a very strong promoter, such as CMV or SV40, this may also be saturating your signal. Your housekeeping plasmid, i.e. renilla, should be driven by a weaker promoter than your luciferase (such as a TK promoter) as they may interact and block the activity of each other.

Some applications, such as if you are measuring the ability of a miRNA to block a binding site, require weaker promoters as the effect you are seeing may be very slight than the effect of a transcriptional repressor element, for example.

Pipetting: A small variation in the amount of liquid a well gets can drastically affect how the transfection and the luciferase assay perform. Luciferase assays are exquisitely sensitive to this! I suggest making a master mix for your transfection reactions (even if it’s just for 3 wells of a replicate). You should always have at least 2 replicates for each combination, ideally three.

Plates: One other issue could be your plates. Background luminescence from neighbouring wells can interfere with your experiment. It’s recommended that you do your luciferase assay in white walled or opaque plates. However, you cannot visualize your cells in white well plates because they are completely white! You can purchase white walled plates with clear bottom wells in which you can do both your transfection and your luciferase assay, but these are very expensive! To avoid purchasing these costly plates, I perform my transfection in regular tissue culture plates and then transfer my lysed reaction into white walled 96 well plates for the assay. A word of warning for white walled/opaque plates– they absorb light!! This may affect your luminescence reading. So always keep these plates in the dark.

You should always repeat an experiment several times to ensure the effect you measured is repeatable and, thus, more likely to be biologically relevant. However, we have noticed that the ability of the cells to undergo transfection depends largely on their confluency, especially with adherent cells. Transfection relies on cell surface contact and overly confluent cells may transfect with less efficiency. Do not assume that if you plate the same number of cells, they will settle on the bottom of the plate in the same way every time! Cells can clump due to vibrations around incubators or magical forces in the air. This can drastically affect the transfection efficiency of your cells and, thus, your luciferase assay results.

Once you have found your optimal experimental conditions, these tips should allow you to collect high quality, reproducible data!