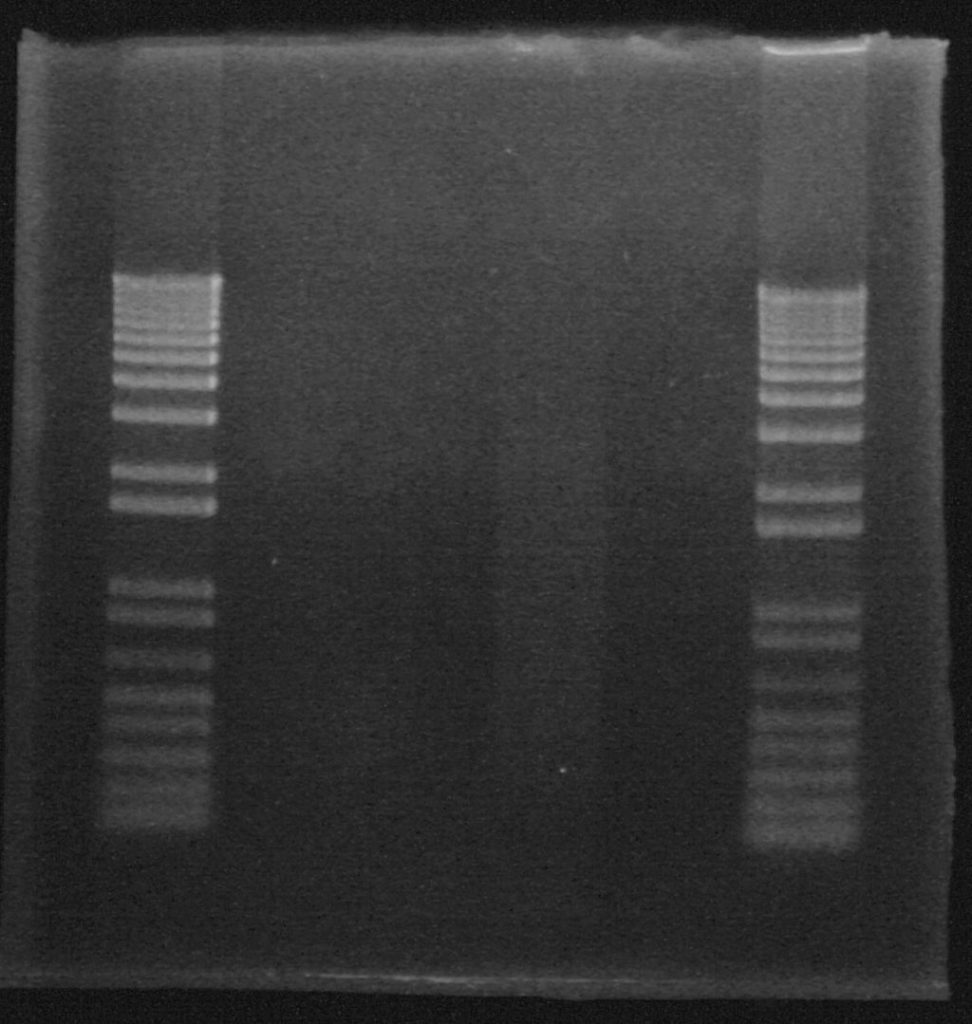 When I began a master’s program in 2008, the lab task I hated more than anything was running agarose gels for DNA. Something so simple, ubiquitous, and necessary gobbled up more hours in the lab than I care to remember. Even though we added the DNA stain directly to the molten agarose and didn’t have to spend time staining gels, gel electrophoresis still ate up entire days in the lab.

I figured that there had to be a faster way to do this.

While waiting for one of my many gel runs to finish, I spent some quality time with Google to find a solution to my problem. I was introduced to Bitesize Bio for the first time when I came across this article, “Faster, Cooler DNA gels”. By using sodium borate (SB) electrophoresis buffer, you can crank up the voltage on the gel box without worrying about distorted DNA bands or even that the gel will melt. The payoffs are good resolution of small DNA fragments (~ 100 bp – 3 kb) and time saved with a shorter gel run. For example, a gel run in SB takes 25 minutes minutes vs. 45 minutes with TBE.

If you want to really get fancy, you can use 1 mM lithium borate (LB) to resolve fragments even smaller than 100 bp.

Being able to run my gels faster with a borate-based electrophoresis buffer was a revelation and allowed me to get much more done in the same amount of time. Why didn’t everyone know about this??

A snag – it doesn’t work with larger DNA fragments

Most of the time, when I wanted to run a gel to look for a band in the neighborhood of 300 bp – 2 kb, SB worked great. However, if I needed to gel-purify a vector, things got dicey. All of the bands of interest – cut vector, uncut vector, ladder, anything bigger than 4.5 kb – were fuzzy, diffuse, and just about useless. Even when I turned the voltage down to the speed of a moderately ambitious snail.

One big drawback that SB and LB buffers share with their cousin, TBE, is poor resolution of large DNA fragments. I learned this the hard way. Several times, in fact.

You can have it both ways!

So I went back to Google. I may even have used Google Scholar this time – that’s how serious I was about finding a single buffer that could handle the range of DNA sizes I worked with. In my case, I needed more resolution on the high end than the low end. Eventually I found this paper, which describes what amounts to a combination of LB and LA buffers.

Duh! Why hadn’t I thought of that?!

It took me several reads before I teased out the composition of lithium acetate-borate (LAB) buffer. In addition, this website lays out the recipe very nicely.

How to run a LAB gel

As with other agarose gels, you should make the gel with the same running buffer you plan to use during electrophoresis, which is 1X LAB. I typically run my gels at about 30 V/cm for 20 – 30 minutes. As you can see in this picture of a 1% gel made in LAB + GelRed, even the high molecular weight bands are pretty well resolved. Unfortunately, my DNA didn’t show up, but the DNA markers are gorgeous!

Separation of bands in 1% agarose gel made using LAB buffer. I used the 1 Kb Plus DNA Ladder (Invitrogen) here.

If you like the idea of fast gel runs and awesome looking DNA bands regardless of molecular weight, you might want to give LAB buffer a try.

Share this to your network:
TwitterFacebookLinkedIn
Written by Kristie Mitchell