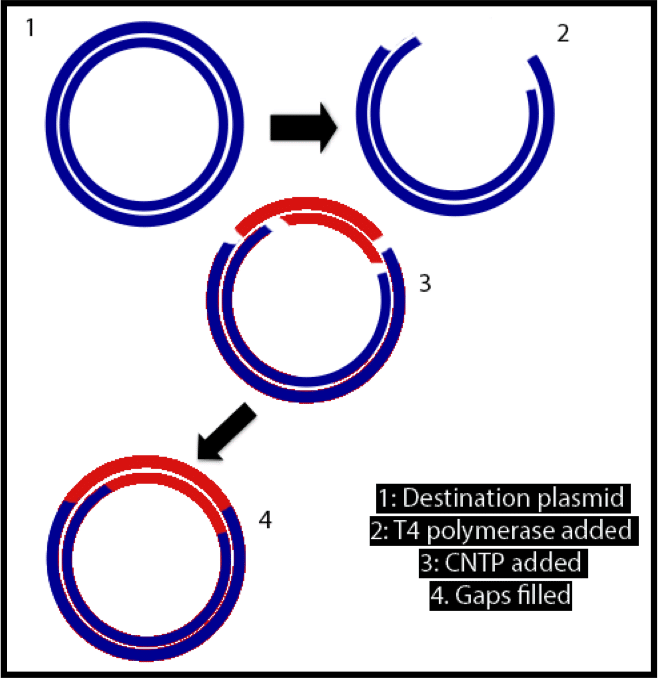 SLIC, or sequence and ligase independent cloning, was developed by Li in 2007 and published in Nature Methods. What makes it a Nature Methods worthy protocol? Unlike other forms of cloning, SLIC does not require restriction enzymes or a ligase!

Don’t believe me? Why not have a go for yourself? I’ve detailed the main steps below to get you started.

To use SLIC for cloning, you first amplify a DNA fragment by PCR. You perform the PCR using specially-designed oligonucleotides that have a 25-base pair sequence on their 5’ termini that is homologous to the ends of the vector you want to clone into (the “destination vector”). The vector ‘ends’ will be the DNA either side of where you want your PCR product to be inserted.

Second, create the ‘ends’ you desire by linearizing the vector. You can do this either by restriction digest or, for those wanting to keep it completely restriction enzyme free, by PCR amplification.

Third, treat the PCR product and the linearized vector separately with a T4 phage DNA polymerase in the absence of dNTPs. The polymerase will use its 3’ exonuclease activity to nibble on the vector and the PCR product, starting at their 3’ end, creating overhangs.

Owing to the design of the oligos, both the linearized destination vector and the PCR product contain a homologous region. The overhangs create vectors and PCR products that are a match made in Heaven! Or in a tube anyway…

After the termini of the linearized vector and PCR product have a sufficient length of complementary 5’ single-stranded overhangs exposed, you add dCTP to the reaction. The addition of dCTP triggers the polymerase activity of the T4 DNA polymerase. However, since only 1 out of 4 dNTPs is present in the reaction mix, replication is minimal and so the overhangs are maintained.

They join together in holy matrimony and hey presto! you’ve got vectors with fragments in them. However, this leaves you with some gaps in the plasmid ring.

When you transform the plasmids into E. coli cells, the gaps are repaired.

You can also use mixed or incomplete PCR products to develop the overhangs. To do that, you mix and anneal the nibbled vector and PCR product together to create a plasmid with four single-stranded nicks, or spaces.

SLIC can be slippery

If you are now itching to get started with SLIC there are a few points you need to know. Like every technique there are some disadvantages, which I have listed below.

The termini of the DNA sequences cannot have any fancy secondary structures such as loops or hairpins, like those within terminator sequences. These structures will compete with the single-stranded annealing/priming of neighboring assembly fragments. On the plus side, this problem can be dealt with by adding sequences from the neighboring fragments to the troublesome ends of your sequence.

Furthermore, combinatorial SLIC, where you combine with another type of ligase independent cloning method such as SLICE, isn’t ideal if sequence diversity occurs within 15 base pairs of the fragment ends of the sequences to be assembled, as this prevents the reuse of the same homology sequences throughout all the combinations. However, if the sequence identity in all the combinations and assembly junctions is extensive enough not to be a limitation, you can get away with combinatorial SLIC.

Will you be saying goodbye to your restriction enzymes and ligases?