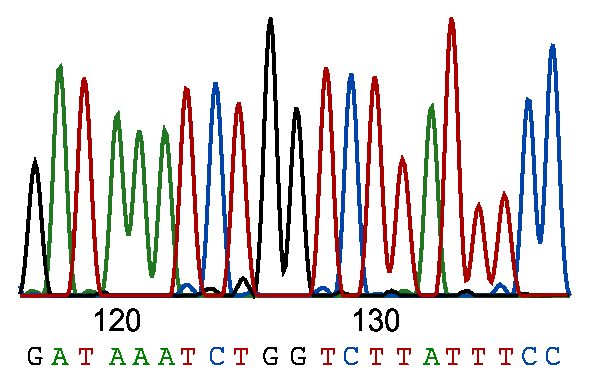 I’ve never run a sequencing gel in my life, but people around me did, and they spent a lot of time on getting it just right. Although the principle described by Sanger in 1975 sounds straightforward (1), sequencing gels are very long and very thin – less than a millimeter thick! They were easy to break at any stage of manipulation. The run speed of the gel should be just right for optimum separation of nucleotide sequences on the gel. Therefore, the first ten nucleotides were always hard to read because they run close to each other.

Fortunately, it’s a technique that can be (and was!) automated. Now instead of reading sequencing gels we read electropherograms (Figure 1). So know that every time you send your PCR products or plasmids for sequencing and receive a nice wavy diagram of your sequence; you are looking at the results of a modified Sanger sequencing method.

The classical method starts as so many PCR reactions do, with a single-stranded DNA template, a primer, DNA polymerase – and, of course, nucleotides. However for Sanger sequencing you do not use just regular nucleotides, you also need modified, radioactive nucleotide called ddNTP. Unlike the usual dNTPs used in PCR reactions, ddNTPs don’t have 3′-OH group to form the phosphodiester bond required for chain elognation.

The infamous sequencing gel usually has four lanes. One lane for each ddNTP reaction – a lane for ddATP, ddCTP, ddGTP, and ddTTP. Electrophoresis of the resulting DNA products on the gel results in a ladder of radioactive fragments – each fragment representing the result of a ddNTP terminating the chain at a certain nucleotide.

After the gel is dried, it is exposed to a X-ray film and developed. The sequences are read from the shortest (close to the end of the gel, as they run faster) to the longest, skipping between A, T, G and C lanes to determine your DNA sequence.

A good CSS run will allow you to read about 300 nucleotides. But this assumes your gel runs perfectly and you do not have any other problems. Other problems include the single-stranded DNA looping, which causes the DNA to jump over. And with this method stretches of the same nucleotides and sequence repeats are difficult to interpret on the gel.

But despite all these troubles this is how the first DNA sequences were determined. “Back when boats were made of wood and men of steel.” Eh?

In the last 20 years CSS using radioactive nucleotides has been mostly replaced by fluorescent nucleotides. However the principle of DNA extension and termination is the same. The main components – labelled nucleotides and the gel – have just been replaced by the next technological step.

Now instead of using radioactive ddNTP, ddNTPs have a fluorescent dye molecule. Once, more different dyes are used for the different dNTPs. This allows conducting the reaction in one tube instead of having to do four separate reactions (3).

Terminal Dye Sequencing reactions are run in capillary electrophoresis apparatus (no gels, hooray!). And an automatic system is used to read the fluorescent signal. The computer then converts all the signals into an electropherogram that you are used to seeing (See Figure 1). These automated systems are more robust than CSS in many ways. For example, this method allows you to get up to 1000 nucleotides per run.

But you don’t want to over-rely on the automatic reading of the sequence. You should still always manually look at your trace. Here are some common sequencing errors you will run across if you do it enough.

CSS has acquired other uses too. DNA foot-printing, where DNA template has a DNA-binding protein attached to it, was invented based on the Sanger sequencing principle. In this method the sequencing reaction will be terminated not at the end of the template, but where the protein sits on the DNA, allowing scientists to pin-point the binding site (4). A spin off of that method is RNA toe-printing, , where RNA plays the role of template and ribosomes – of the bound protein (5).

Do you have a horror or funny story associated with Sanger sequencing? Please, share it with us.

Share this to your network:
TwitterFacebookLinkedIn
Written by Vicki Doronina