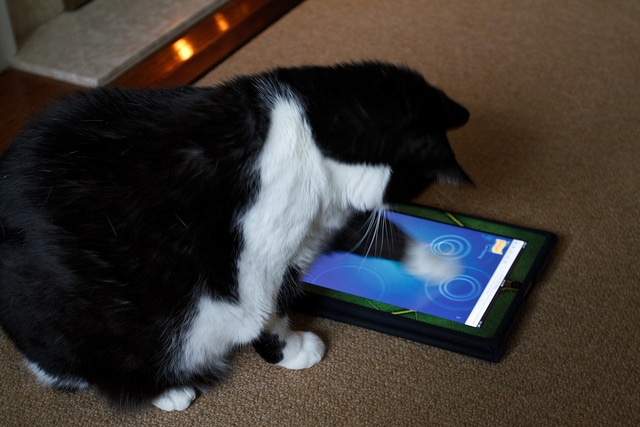 No, iPOND is not a sleek electronic fishing device from Apple. However, if you thought about fishing, well, you’re not far off the mark. If you find yourself wondering which proteins are present at DNA during or after replication, iPOND is an elegant technique to help you find out.

In this article, I will explain how iPOND works and how it can be modified to suit your specific needs. Let’s go fishing!

What Is This Fishing Expedition – How Does iPOND Work?

In his famous play Romeo and Juliet, Shakespeare asks us “What’s in a name?”. In the case of iPOND, the name reveals the essence of the technique. iPOND: isolation of proteins on nascent DNA. So, there you have it. iPOND allows us to isolate the proteins present on newly synthesized DNA with high spatial and temporal resolution.

Sirbu and colleagues at Vanderbilt University School of Medicine developed this technique and first published it in 2011.1 Since then, it has provided a method to investigate the dynamics of proteins present on DNA during or after replication, under either unperturbed or challenged conditions. Let’s take a step-by-step look at the technique (Figure 1). 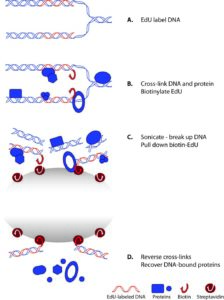 Figure 1. Overview of the iPOND procedure. A. Incubation of cells with the thymidine analog EdU to label newly synthesized DNA. B. The proteins present at the DNA are cross-linked to each other and to the DNA by treating cells with formaldehyde. Then, a biotin moiety is attached to the EdU using a click chemistry reaction. C. Sonication breaks the DNA into smaller EdU- or non-EdU-labeled pieces of DNA. The EdU-labeled pieces and the proteins cross-linked to them are then pulled down with streptavidin-coated beads. D. After washing the beads, the DNA and protein cross-links are reversed and the proteins bound to the EdU-labeled DNA at the time of cross-linking are recovered for further analysis.

iPOND relies on the ability to discern newly replicated DNA from the bulk DNA in cells. The trick here is to coerce cells into incorporating a slightly different version of the endogenous deoxynucleoside thymidine during DNA synthesis.

Mammalian cells can take up and phosphorylate the thymidine analog 5-ethynyl-2’-deoxyuridine (EdU). This allows EdU incorporation, instead of thymidine, during DNA synthesis (Figure 1A). In this way, EdU effectively marks the DNA that underwent synthesis while this thymidine analog was present in the cell culture medium.

Catch Your Fish – Cross-Linking and Biotinylation

After pulsing with EdU, cells are fixed by formaldehyde treatment. Formaldehyde is a cross-linking agent that covalently attaches protein-DNA complexes, effectively stopping DNA replication (Figure 1B).

With all the DNA and protein complexes now fixed, a metaphorical fishing hook is attached to the EdU that has been incorporated into the nascent DNA. EdU contains an alkylene functional group, which can be covalently linked to a biotin azide by copper-catalyzed cycloaddition — that is click chemistry to us non-chemist mortals.2 With this biotin-EdU fishing hook, we are now ready to fish out our cross-linked DNA-protein complexes from the cells.

Reel ‘Em in – Pull down of DNA-Associated Proteins

The next step in the iPOND procedure is to break the cells open and sonicate the lysate. Sonication shears the DNA, which reduces background signals. DNA and protein will be cross-linked throughout the genome. But the sheared DNA fragments will be either biotin-EdU-labeled or non-labeled (Figure 1C). In this way, we can specifically fish out the DNA pieces that were replicated when EdU was present in the culture medium.

The fishing is done through a good old-fashioned pull down procedure. Sprinkle some streptavidin-coated beads into the lysate, and leave the fish to bite overnight. The biotin moiety on the EdU-labeled DNA will bind the streptavidin moiety on the beads with very high affinity. This, and the fact that proteins are cross-linked to the DNA, means that nonspecific proteins can be washed off using very stringent conditions.

What Did We Catch? – Protein Analysis

Finally, we are ready to have a look at our fish. The DNA-protein cross-links are reversed and the proteins eluted off the streptavidin-coated beads by boiling in a denaturing buffer (Figure 1D). You now have a sample containing the proteins that were present at the EdU-labeled DNA at the time of cross-linking.

If you know what you are looking for, you can go ahead and western blot against you favorite protein(s). Alternatively, you could take an unbiased approach. iPOND samples can be processed for mass spectrometry, which allows for unbiased detection and quantification of the proteins and even their post-translational modifications (PTMs). In 2013, Sirbu and colleagues and Lopez-Contreras and colleagues were the first to use iPOND coupled to mass spectrometry to identify more than 100 proteins specifically enriched at replication forks.3,4

What Do You Want to Fish For? – Varying Experimental Design

If you want to catch a specific kind of fish you need to adapt the bait. Similarly, you can adapt iPOND to investigate specific conditions related to DNA synthesis. Varying the conditions during EdU addition or timing of EdU addition itself will determine which processes you are analyzing (Figure 2). In the next few sections, we will take a look at some examples. 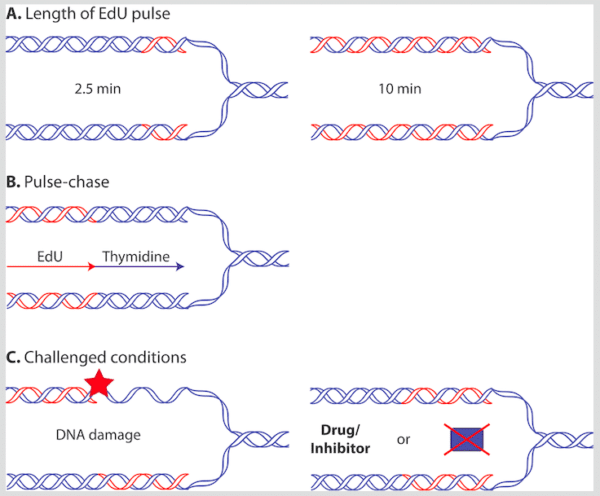 Which Proteins Are Present at and behind the Replication Fork?

Varying the Length of the EdU Pulse

The longer the cell culture is incubated in the presence of EdU, the more DNA will be replicated. Therefore, longer stretches of DNA will be labeled (Figure 2A). This implies that very short incubations with EdU will result in samples containing the proteins involved in actively synthesizing DNA. Longer incubations will yield samples containing these proteins as well as proteins left behind the active replication fork and other proteins that bind nascent DNA.

A 2.5-minute incubation with EdU is enough to detect components of the active replication fork. When taking the speed of EdU diffusion, phosphorylation and DNA synthesis into account, the estimate is that iPOND has a resolution of 1 to 2 kilobases of DNA.1,5

Which Proteins Are Present at the Replication Fork in Early or Late S-Phase?

Synchronization and Timing of the EdU Pulse

Synchronizing cells has several advantages. When released collectively into S-phase, more cells will actively incorporate EdU. This allows you to use less cellular material to achieve the same amount of sample compared to using unsynchronized cells. In this case, you will need 1×108 cells — the equivalent of three 15-cm dishes of confluent HEK293 cells.1,5

Another advantage of synchronization is the possibility to add EdU at different times during S-phase. This will allow you to investigate which proteins are present at DNA synthesized in early versus late S-phase. Kliszczak and colleagues at the National University of Ireland Galway used this setup as a proof of principle when publishing a technique highly similar to iPOND in 2011.6

Which Proteins Are Present at Maturing Chromatin?

Maybe you are not actually interested in DNA synthesis per se. Perhaps you are more interested in how the DNA-protein environment, the illustrious chromatin, is established once the DNA has been replicated. Well fear not, you can tailor your DNA-bait to catch this fish as well.

In this case, you can do a pulse-chase experiment. This involves first “pulsing” cells by incubating them shortly with EdU and then “chasing” by adding excess thymidine. In this way, the EdU-labeled DNA is left behind the forward-moving replication fork (Figure 2B). The proteins now present at the EdU-labeled DNA will be involved in establishing chromatin, dealing with DNA replication errors or bypassed damage rather than synthesizing the DNA. Alabert and colleagues at the University of Copenhagen employed this approach to investigate the differences between nascent and maturing chromatin using a technique highly similar to iPOND, which they termed nascent chromatin capture (NCC).7

Which Proteins Are Present at Perturbed Replication Forks?

You can pulse cells with EdU in the presence of drugs that challenge DNA synthesis or damage DNA (Figure 2C). In this setup, you can investigate which proteins are present when the replication fork cannot continue normally or when it meets a specific DNA lesion.

You can also do the experiment in the presence of functional inhibitors of specific proteins or processes. Or in cells that have your favorite gene mutated or deleted. Now, you can investigate the impact of your process or gene of interest on the protein landscape of DNA synthesis.

Ultimately, your imagination is the limit for how you can twist iPOND into fitting your research interest. Provided, of course, that this relates to DNA synthesis. You can combine the above examples or maybe you have something completely different in mind. You need not even limit your experimental creativity to DNA replication. In principle, every cellular process involving DNA synthesis (e.g., DNA repair processes outside S-phase) can be studied with the iPOND technique.

Now that you know how iPOND works and how you can adapt it to answer your favorite DNA synthesis-related research question, you can start fishing. Or you can join me for part 2 of this article series, were we will compare fishing poles and find out how iPOND compares to a few of the other techniques we commonly use to investigate the protein landscape of the DNA.