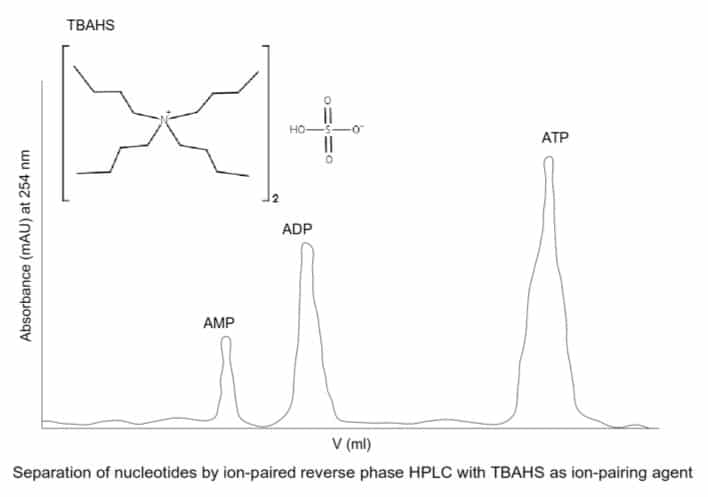 If you work in the field of molecular biology, there is hardly a day that goes by that you don’t use nucleotides. But beyond the use of the four well-known deoxynucleotides in PCR, you can use nucleotides for several other applications. For example, kinases and phosphatases use nucleotides as substrates, and phosphotransferases transfer phosphate group from one nucleotide substrate to another.

If you want to study the kinetics of such enzymes, you need to quantify either the substrate or the product.  One way to measure nucleotides directly is by using ion-paired reverse phase HPLC.

You can detect nucleotides in several ways.

Most nucleotides absorb electromagnetic radiation in the range of 220-280 nm, and you can detect them using a UV-Visible Spectrophotometer. However, be aware that when the substrate and the product overlap significantly in their absorption spectra, it is difficult to detect one without interference from the other.

If only you could directly detect and quantify a nucleotide without interference from other nucleotides—maybe even separate them out from a mixed solution! Fortunately, you can. Ion-paired reverse phase HPLC has been used to separate a mixture of nucleotides, nucleosides, and nucleobases for three decades now.2,3,4

Let us consider a hypothetical scenario in which you need to separate out ATP, ADP and AMP. Since all three are negatively charged at neutral pH, you need to use an acidic ion-pairing agent like tetrabutylammonium hydrogen sulfate (TBAHS).

ATP is more polar than ADP, which in turn is more polar than AMP. Hence, if you mix all three and pass the solution through the stationary phase, ATP will bind with higher affinity to the ion-paired stationary phase, while AMP will bind with less affinity. Then, you can increase the hydophobicity of the mobile phase by adding organic solvents like acetonitrile or methanol. This causes the nucleotides to detach from the stationary phase and elute out. In our case, AMP will elute out first, followed by ADP and ATP (see image below). Improve the separation by tweaking the concentration of the ion-pairing agent, the percentage of organic solvent and pH of the mobile phase.

The two most important factors that affect separation are the type of organic solvent and its concentration in the mobile phase. The two most widely used organic solvents are methanol and acetonitrile. Methanol is more polar than acetonitrile and, hence, is less powerful in separating compounds with stronger affinity for the stationary phase. However, this is not the only factor to consider when choosing your organic solvent. Sometimes methanol just works better than acetonitrile in separating out a specific set of nucleotides. Therefore, try out both organic solvents and see which one works best for you. Compared to nucleotides, nucleosides and nucleobases have very low affinity to the stationary phase and will elute early in the chromatogram and in some cases, even without adding the organic solvent.

Choose the Right Concentration and Gradient of Organic Solvent

Use the Right pH

Nucleotide separation is usually carried out between pH 6.0 and 8.0. At very low pH, nucleotides are not negatively charged and will not bind to the stationary phase. At very high pH, the ion-pairing agent will be neutral and hence not bind to the nucleotides.

Standardizing an ion-paired reverse phase HPLC protocol that suits your needs can be time consuming. However, it is worth the time investment. You will be rewarded later with a flawless method that will be used for years to come by your colleagues and juniors.

Share this to your network:
TwitterFacebookLinkedIn
Written by Arpit Shukla