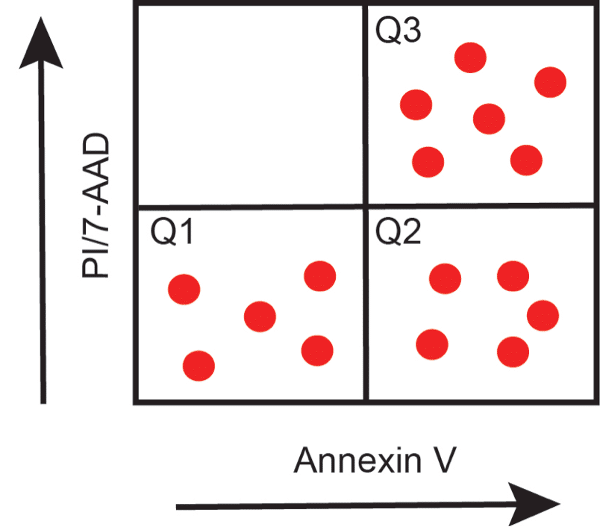 In real life, cells are instructed to commit suicide for the greater good of the organism. The programmed cell death (apoptosis) is important during development of a multi-cellular organism. A good example you will appreciate is the dis-appreance of the tail from a tadpole as it turns into a frog. On the reverse, the lack of cellular apoptosis leads to uncontrolled cell growth and various malignancies. Therefore, scientists are always searching for new ways to study cell death. Flow cytometry is an awesome invention that allows you to examine each cell’s surface protein expression and internal protein secretion. Flow cytometry revolutionized the field of immunology and continues to advance cell biology research. There are currently several different standard methods that scientists have developed to study cell death using flowcytometry.1 Today, I would like to introduce a relatively simple and reliable method to study cell death via detection of phospholipid moieties on the cell surface.

How does Annexin V staining work in an apoptosis assay?

Following is a typical procedure for Annexin V staining

Note: all the washing and incubation should be done in 1x binding buffer.2

1. Binding is reversible and requires a specific buffer

Due to its requirement of calcium for binding, the assay requires use of a Annexin V binding buffer, which is usually supplied when you purchase a kit. Note that the binding is reversible and the samples should be run as soon as possible to avoid the increase in background level.

When running multiple colors, which is usually the case with any assays nowadays, mix and match your flurochromes to avoid spectra over-lap and compensation problems

3. Cell permeability dyes (PI or 7-AAD) are required and fixation is not possible

Annexin V assay requires the incorporation of DNA-binding dyes (i.e., PI/7-AAD) to tell whether the cells are at the early (Annexin V positive, 7AAD negative) stage and actively undergoing apoptosis. The problem with PI/7AAD is that they MUST remain in the buffer for analysis. Therefore, cell fixation is not an option. Coupled with the reversible binding property of Annexin V, the assay requires careful planning and is more time-sensitive than other assays that allow fixation to preserve the cellular status.

There are many ways to detect cellular apoptosis. For example, you can perform western blot analysis to detect the activation of pro-apoptotic caspase enzymes. In addition, you can also perform “tunnel” assay to look at double strand DNA fragmentation, which is an indicator of late-stage apoptosis. However, annexin V staining is by far the most straight forward and requires less time. First of all, annexin V staining looks at the early stage of apoptosis and simple staining of PS on the cell surface. It requires less incubation time as compared to “tunnel assay”, which require incorporation of enzymes to label the broken end of double stranded DNA. So, next time if you are thinking about studying programmed cell death, give annexin V staining protocol a try!