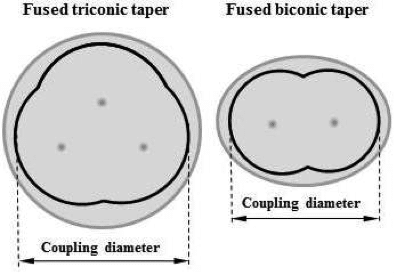 Generally refers to any device (e.g., laser diode) that uses mirrors in an internal cavity to produce multiple reflections.

A phenomenon that causes some materials to rotate the polarization of light in the presence of a magnetic field parallel to the direction of propagation.

A threaded optical connector that uses a special curved polish on the connector for very low backreflection. Good for single-mode or multimode fiber.

A mechanical fixture, generally a rigid tube, used to confine and align polished or cleaved fiber ends in a connector.

A mechanism whereby the core of a single-mode fiber can be destroyed at high optical power levels (>2 MW/cm2). The reflection from the damage vaporizes the fiber immediately before its destruction. While this new defect remains reflective, part of the signal propagates back toward the transmitter.

An optical fiber in which the refractive index of the core varies periodically along its length, scattering light in a way similar to a diffraction grating, and transmitting or reflecting certain wavelengths selectively.

Number of device failures in one billion device hours.

Interfering products on either side of the original wavelength can be filtered out. FWM is most prevalent near the zero-dispersion wavelength and at close wavelength spacing.

A method of deriving two or more simultaneous, continuous channels from a transmission medium by assigning separate portions of the available frequency spectrum to each of the individual channels.

Reflection loss at fiber ends due to the difference between glass and air refractive index. The maximum reflection caused by a perpendicular air-glass interface is about 4% or about -14 dB.

Simultaneous transmissions in both directions.

A method of making a multimode or single-mode coupler by wrapping fibers together, heating them, and pulling them to form a central unified mass so that light on any input fiber is coupled to all output fibers.

The devices are bidirectional and offer low backreflection. The technique is best suited to single-mode and multimode couplers.

A bundle of fibers fused together so they maintain a fixed alignment with respect to each other in a rigid rod. See Figure 1.

A permanent joint of N (?2) fibers made by heating and fusing them together.

The slope of the gain spectrum over a determined range of wavelengths, which corresponds to the slope of least mean square regression line of total signal spectrum peaks. Gain slope is expressed in dB/nm.

The velocity of light in a vacuum (c), divided by the group velocity of the mode. Also called group refractive index.

The velocity with which the envelope of the wave propagates through space.

A type of optical fiber composed of a silica core surrounded by a hard polymer or similar material, which is much stronger than the customary cladding material.

A transmission system or cable construction that combines both

An optical device (such an EDFA) that reinforces the signal in a optical link. This allows pursuing the transmission over distance.

Optical power loss that results from a splice or from inserting a device (such as a connector or a coupler) into a previously continuous transmission path.

The ability to prevent undesired coupling from one channel to another.

An instrument that uses the principle of interference of electromagnetic waves for purposes of measurement. Used to measure a variety of physical variables, such as displacement (distance), temperature, pressure, and strain.

Noise generated within optical fiber. This disturbance is caused by the distributed back reflection that is generated by Rayleigh scattering. OTDRs measure this scattering power to deduce the fiber attenuation over distance.

A fiber nonlinearity mechanism that occurs because the refractive index of glass is power-dependent. Signals hit each other (beat together) and generate interferences at different frequencies. Similar to Four Wave Mixing.

In a digital transmission system, distortion of the received signal, manifested in the temporal spreading and consequent overlap of individual pulses to the degree that the receiver cannot reliably distinguish between changes of state, i.e., between individual signal elements. At a certain threshold, intersymbol interference will compromise the integrity of the received data. Intersymbol interference may be measured by eye patterns

Loss due to differences in the fibers being spliced.

Small and rapid variations in the timing of a waveform due to noise, changes in component characteristics, supply voltages, imperfect synchronizing circuits, etc. See also DDJ, DCD, and RJ.

A short fiber optic cable with connectors on both ends.

One thousand symbols of data per second. Equivalent to 1 kb/s for binary signaling.

A very strong, very light, synthetic compound developed by DuPont which is used to strengthen OF.

Generating signals by the interruption or modulation of a steady signal or carrier.

An optical fiber developed by Corning, designed to have a large area in the core, which carries the light.

The attenuation that results from lateral misalignment between two fibers or between a fiber and an active device.

An optical fiber used to couple and suitably redistribute light from an optical source into an optical fiber. Often the launching fiber is used to create an equilibrium mode distribution in a multimode fiber.

Use of optical fibers to illuminate.

A communication link between two or more points within a small geographic area, such as between buildings. Smaller than a metropolitan area network (MAN) or a wide area network (WAN).

A transmission band for wavelength from 1565 to 1625 nm. Part of third window.

A type of fiber optic cable construction where fibers are contained within an outer protective tube yet can move to some extent.

An accounting of overall attenuation in a system. See optical link loss budget.

1) Reduction of the storage size of digital data by employing one or more appropriate algorithms in such a way that the data can be recovered without losing integrity. 2) Reduction of the amount of data that needs to be transmitted per unit time though an analogous real-time process that does not compromise the ability to completely restore the data.

Reduction of the bit-rate for an image signal by using algorithms that achieve a higher compression than lossless compression. Lossy compression presents loss of information and artifacts that can be ignored when comparing to original image. Lossy compression takes advantage of the subtended viewing angle for the intended display, the perceptual characteristics of the human eye, the statistics of image populations, and the objective of the display. 2)  Removal of redundant bits from an image in video technology producing a minor loss of image quality.

All macroscopic deviations of the fiber’s axis from a straight line that will cause light to leak out of the fiber, and consequently signal attenuation. See Figure 2.

A network covering an area larger than a LAN. A series of local area networks, usually two or more, that cover a metropolitan area.

The average power for a continuous valid symbol sequence coupled into a fiber.

Sharp and microscopic stresses (caused by external factors such as cabling) on a fiber that introduces local discontinuities,  which results in light leaking from the core to the cladding by a process called mode coupling. See Figure 3.

The smallest radius an optical fiber or fiber cable can be bent before increased attenuation or damage occurs.

The transfer of energy between modes. In a fiber, mode coupling occurs until equilibrium mode distribution (EMD) is reached.

Dispersion resulting from the different transit lengths of different propagating modes in a multimode optical fiber.

The section of the fiber through which the majority of the light energy is passing. See Figure 4. It’s larger than the physical diameter of the core. This phenomenon occurs because some of the light energy travels also through the cladding (this light is the evanescent wave). Optical fibers with large MFD are less sensitive to lateral offset during splicing, but present higher loss when bent.

A device that mixes modes to uniform power distribution.

A device that removes cladding modes.

The fiber optic receiver noise resulting from the interference of delayed signals from two or more reflection points in a fiber optic span.

A device that combines two or more signals into one output.

Whew! Well I hope that helps get you started. To learn even more about fiber optics read my first article “Introduction to Optical Fibers”.