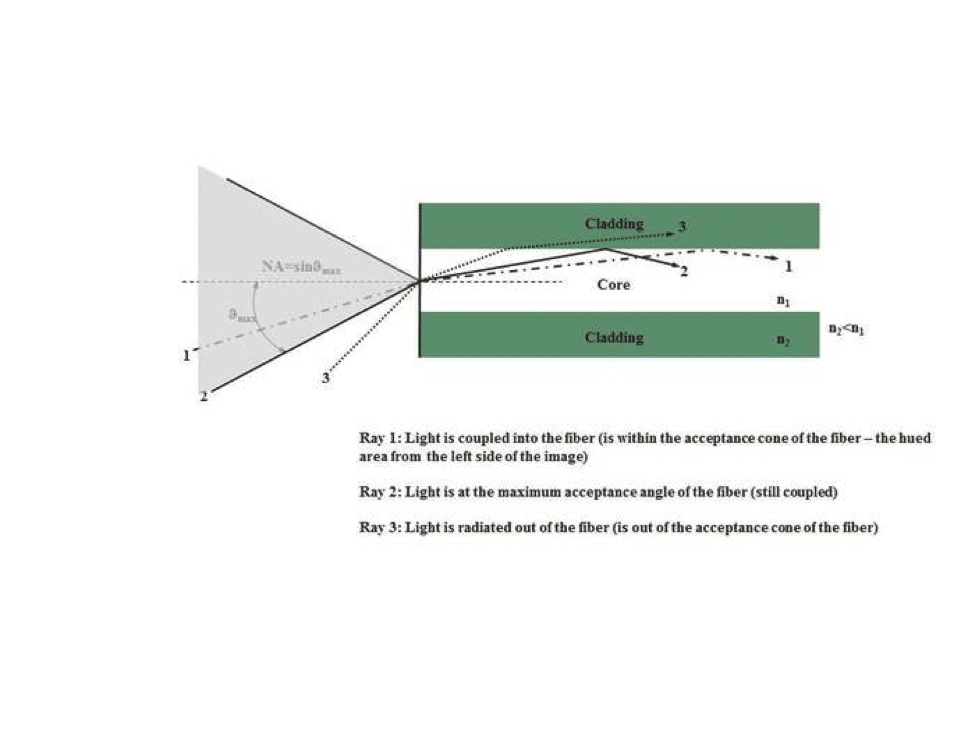 The half-angle of the cone (Θmax in Figure 1) within which incident light is totally internally reflected by the fiber core. Applies only to MM optical fiber though!

A device (optical element of optical fiber) that allows lower level signals to be added or dropped from a communications network (high-speed optical carrier) in a wire center [wavelength division multiplexer (WDM) transmission]. The connection to add/drop multiplexer is via a channel to a central office port at a specific digital speed (DS3, DS1, STS, etc.). Illustrated below in Figure 2. Tx=transmission of a signal, Rx=Reception of a signal.

A type of fiber optic connector with a 5-15 angle-polished end surfaces of the connector tip to minimize backreflection. In Figure 3 the angle for APC configuration is 5÷15º.

A protective layer of corrugated steel, wrapped around a cable. To prevent rodent attacks. Used in both buried and aerial applications.

A coefficient characterizing the attenuation of an optical fiber per unit of length (dB/km). This coefficient corresponds to the rate of optical power loss with respect to distance along the fiber.

The power reflected back toward the source in the optical link (fiber ends, fiber deformations, and connectors). Also called Fresnel reflection. See a Figure 3.

The range of frequencies within which a fiber optic or a terminal device can transmit data or information.

The smallest radius an optical fiber or fiber cable can bend before excessive attenuation or breakage occurs.

The average fraction of transmitted bits that are received incorrectly. The BER of a system for optical fiber communications is influenced by noise, optical losses, dispersion, and nonlinearities.

In optical fiber, a protective coating applied directly to the fiber.

The ratio of the received carrier strength to the strength of the received noise (in dB) before any nonlinear process such as amplitude limiting and detection takes place. High C/Ns provide better quality reception, and generally higher communications accuracy and reliability, than low C/Ns.

A passive component composed of three or four ports that couples signal from one port (n) to the next port (n+1). The first port being is counted as following the last one and port n is isolated from signals in port n+1. See Figure 5.

The process of separating an optical fiber by a controlled fracture of the glass, for the purpose of obtaining a fiber end, which is flat, smooth, and perpendicular to the fiber axis

The sum of the power level of each carrier of a DWDM system.

The change in the phase of a signal caused by the interaction with another signal. The phenomenon is due to nonlinear Kerr optical effect occurring in the fiber and causing a change of the refractive index.

In a communications network, a signal from a remote receiver to a transmitter that it is ready to receive a transmission.

The number of bits of information in a transmission system, expressed in bits per second (b/s or bps), and which may or may not be equal to the signal or baud rate.

Unit used to express values of power (intensity) level on a logarithmic scale. The power level is always relative to a reference power P0: where P and P0 are expressed in the same linear units.

A technique used to multiplex several signals on a single fiber within a narrow wavelength band. For example: the transmission of many closely spaced wavelengths in the 1550 nm region over a single OF. Wavelength spacing is usually 100 GHz (0.8 nm) or 200 GHz (1.6 nm). DWDM includes C-Band, S-Band, and L-Band (vide infra).

A type of single-mode fiber designed to have zero dispersion near 1550 nm. This fiber type is not suitable for DWDM applications, due to its high nonlinearity at the zero-dispersion wavelength.

An injection laser diode built with a Bragg reflection grating in the active region in order to avoid multiple longitudinal modes and enhance a single longitudinal mode. It produces a finer range of wavelengths than a Fabry-Perot laser, are often used in DWDM communication where a tunable laser signal is desired.

Part of a cable system used to carry signals from the head-end to subscriber terminals.

A characteristic of an Optical Time Domain Reflectometer (OTDR). Depending on the noise level reference, there are a couple of definitions:

Area of the fiber corresponding to the mode field diameter. See Figure 6.

EA determines the power density of the light injected into the fiber, ie small EA ? high power density ? important nonlinear effects. The EA of a standard single-mode optical fiber is around 80?m, and can be as low as 30?m for compensating fibers. The value of EA is included usually in the description of the fiber’s name.

In multimode fibers, EMD is a steady state mode distribution. When achieved, the relative power in modes is stabilized and the distribution of light travels in the medium without any disturbance or leakage/gain.

The ratio between the transmitted power at a given radius of the core and the total injected power.

EF is related with the power distribution inside the fiber core, the spot size of the light source (LED, VCSEL, and laser) and the alignment of the beam into the fiber. All of these are called ‘launching conditions’. Launching conditions affect attenuation in the fiber. An ideal situation is illustrated in the second image in Figure 7 above. .

The steady modal state of a multimode fiber in which the relative power distribution among modes is stabilized and independent of fiber length (light travels in the medium without any disturbance or leakage/gain). The spot diameter is around 70% of core diameter.

The length of multimode fiber that is necessary to reach the equilibrium mode distribution for a specific excitation condition.

The ratio of the low/OFF optical power to the high/ON optical power, expressed as a percentage [(PL/PH) x 100].

In a fiber interconnection, the portion of loss due to imperfect joining of a connector or splice.

An oscilloscope display that allows several system performances measurements. The “openness” of the eye relates to the BER that can be achieved. The vertical eye opening indicates the noise level in the system: the more it is opened the less noise level. The horizontal eye opening is related to the amount of jitter in the signal: the wider the opening, the less jitter. At higher data rates the profile thickens. See Figure 8.

Well that is it for this part of the alphabet. Be sure to check out next month forIllustrated Optical Fiber Glossary (F-Z).