Mammalian cell transfection is a technique commonly used to express exogenous DNA or RNA in a host cell line (for example, for generating RNAi probes). There are many different ways to transfect mammalian cells, depending on the cell line characteristics, desired effect, and downstream applications. In this article, I will review the different methods of expressing exogenous DNA or RNA sequences in mammalian cells. These methods can be broadly divided into two categories: those used to generate transient transfection, and those used to generate stable transfectants.

Transient transfections are most commonly used to investigate the short-term impact of alterations in gene and protein expression. Plasmid DNA (pDNA), messenger RNA (mRNA), short-interfering RNA (siRNA), short-hairpin RNA (shRNA) and microRNA (miRNA) are commonly used in transfection experiments. During transient expression, however, the nucleic acid sequence is not integrated into the host cell genome. Therefore, the effect on target gene expression is temporary (24-72 hours for RNA probes, 48-96 hours for DNA probes).

On the other hand, when long-term expression of the sequence is desired, stable transfection protocols are used to generate permanent expression in cell lines. In this case, the transfected genetic material is integrated into the host cell genome. A selection marker is used to identify cells that have successfully integrated the sequence of interest. The selecting agent enriches and enables the growth of a subpopulation where the exogenous genetic material has been incorporated into the genome.

Liposomes are synthetic analogues of the phospholipid bilayer, the building block of the cellular membrane. These transfection compounds share a number of characteristics with their natural counterparts, including the presence of hydrophobic and hydrophilic regions of each molecule which allow for the formation of spheroid liposomes under aqueous conditions. In the presence of free DNA or RNA, liposomes encapsulate the nucleic acids to create an efficient delivery system. The charge, composition and structure of the liposome defines the affinity of the complex for the cellular membrane. Under specific conditions, the liposome-nucleic acid complex is able to interact with the cell membrane to gain access into the cell by endocytosis and subsequently release the nucleic acids into the cytoplasm. There are several factors that determine the successful delivery of nucleic acids by liposome into mammalian cells, including particle size, lipid formulation, charge ratio and the method of liposome preparation.

Alternatives to liposomes include non-liposomal lipids and polymers capable of forming complexes with nucleic acid to form micelles, or tiny encapsulating droplets. The transfection is usually performed under aqueous conditions, which enables the lipophilic portion of the amphiphilic compound, or the part of the droplet that displays affinity for fatty-acid compounds such as the cell membrane, to form the micelle capsule that encases the exogenous nucleic acids.

Dendrimers are highly branched, globular macromolecules that are capable of interacting with DNA to form small complexes. Dendrimers are stable in biological liquids and are not sensitive to temperature. These properties make dendrimers highly efficient tools for tissue culture transfections. The downside of dendrimers is that they are non-biodegradable and therefore may be toxic to cells with prolonged exposure.

Electroporation is a highly efficient technique for delivering exogenous nucleic acids to suspension cells and non-adherent primary cells (like lymphocytes). This technique uses electricity to create transient pores (electropores) in the cellular membrane to enable the uptake of charged nucleic acid molecules (RNA or DNA) into the target cells.

In certain cases, permanent expression of a probe or gene of interest is desirable in your experimental system. This requires targeting specific cells within a population for gene delivery by microinjecting specific DNA sequences into the nuclei of target cells. The limitation of this method is that the number of cells that can effectively be transfected by this method is limited by the skill of the person performing the microinjection.

Exogenous genes or probes can be introduced into cultured mammalian cells by viral transduction techniques that use viruses as carriers. Viral delivery is useful for transfecting primary cell cultures, and there are numerous in vivo gene delivery approaches that allow the delivered genetic material to be integrated into the target cell genome using the viral machinery. Often, a selection marker (either antibiotic-based or GFP-based) is used to select for cells that have been successfully transduced with the virus. Once the genetic material is incorporated into the host genome, it relies on the host transcriptional machinery for expression. In the case of shRNA/miRNA probes, RNAi machinery is required for processing. These gene therapy approaches, however, have limited clinical and laboratory uses because the viral vector integrates randomly into the genome and could produce significant bio-hazardous risks.

The table below summarizes the aspects of stable and transient transfection methods: 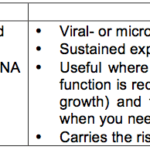 What are some of your suggestions for using transient or stable mammalian transfection methods?

Share this to your network:
TwitterFacebookLinkedIn
Written by Yevgeniy Grigoryev
Image Credit: euthman