In my last article I introduced you to the Plexor System. And from that we already know that while in reactions that user SYBR Green for detection, fluorescence increases with accumulation of PCR product, with Plexor the fluoresence decreases. Today I want to compare some other well-known features of SYBR Green chemistry and see how it compares against Plexor.

First, a quick recap of how a PCR reaction tracked by SYBR and PlexorTM chemistries would look in an amplification plot: 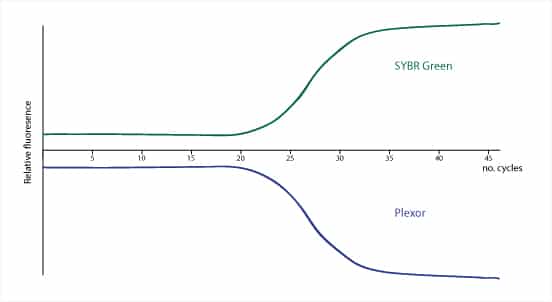 Now let’s see how they compare in other areas:

SYBR Green I is a DNA intercalator dye, whereas in Plexor, the fluorescent label is incorporated as part of the primer and the quencher is present in the dNTP mix.

Since SYBR Green binds to any double stranded DNA, non-specific signal could be obtained if, for example, there is significant accumulation of  primer dimers or non-specific products.

In Plexor on the other hand the signal obtained is a direct result of the interaction between the fluor on the primer with the quencher on the nucleotide incorporated into the amplicon, and is therefore specific to the amplifed product. The Plexor reagent mix also contains a proprietary primer-dimer inhibitor that allows greater signal specificity than SYBR chemistry (3).

As a side note, use of an internal amplification control (IAC) is a good idea when sample is known to contain contaminants that inhibit PCR reaction. A typical IAC would be a non-target DNA sequence that is present in the same sample reaction tube, which is co-amplified simultaneously with the target sequence (2).

During melt curve analysis SYBR Green I dye can migrate to other double-stranded regions resulting in incorrect analysis. This can be a particular problem, for example, when melt curves are used to distinguish between genotypes (1).

But dye migration is not an issue with Plexor and quenching of fluorescent signal is reversible, so melt curve analysis is not a problem. The use of labeled primers for melt curve analysis solves many of the problems associated with SYBR Green dye (1).

SYBR Green is a single channel signal, so is not amenable to multiplexing.

But in Plexor the iso-dC on the primer is labeled at the 5′ with a fluor and by using a different fluor on each set of primers, it is possible to probe multiple targets in the same reaction. Depending on the instrument and choice of oligo vendor, Promega makes specific recommendations for dyes that can be used.

Believe it or not, there are some disadvantages unique to Plexorâ„?.

1. Iso-dG is part of the dNTP mix. It has to be purchased from Promega and cannot be used as part of any non-Plexor PCR reaction.

2. As with any fluorescence technology, the reagents have to be protected from light. Since fluorescence labels are known to degrade with time, the cost of reagents can be expensive depending on throughput.

3. The absorption maximum of Dabcyl occurs at 474nm which falls below the emission wavelength of commonly used fluorophores such as FAM, TET and JOE. This means that quenching efficiency of Dabcyl is not 100%. It is therefore important to exercise good care in choosing the right fluorophore (4).

Can you think of other features? Drop us a line to let us know.

Share this to your network:
TwitterFacebookLinkedIn
Written by Shoba
Image Credit: