Radioactivity is still the most sensitive detection mechanism for many macromolecules and enzymatic activities. In graduate school, I performed countless radioactive kinase assays, watching the radioactive gamma 32P of ATP get transferred to my autophosphorylating receptor of interest, and then separating my protein from free hot ATP on a gel. The gel is dried, covered in plastic wrap, and exposed to a storage phosphor screen for a few hours. The phosphor screen is then scanned with laser and the emitted light is converted into an image of radioactive bands on a gel.

For many years, I repeated this experiment, using the mysterious phosphor imaging screen to capture my results. But what is the phosphor screen? How does this floppy piece of plastic actually work? Here, I’ll dispel some of that mystery and outline the basic concepts of the phosphor screen. 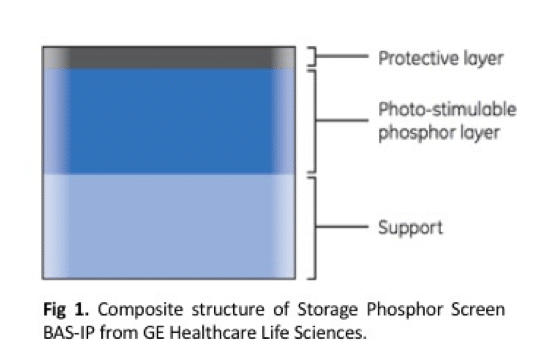 The most crucial layer of the phosphor screen is the center one (Figure 1, GE Healthcare Life Sciences). This layer contains the phosphor layer, packed with phosphor particles, which I will explain below. The important phosphor layer is shielded from physical damage with a protective layer. The base layer is for support and, depending on the manufacturer, can be a flexible plastic or a harder, more inflexible surface.

The phosphor particles are a crystal lattice of BaFBr (barium fluorobromide). This material contains photostimulable luminescence (PSL), meaning it can stably absorb energy and then release it upon laser stimulation. Photostimulable phosphors have been applied to both research and X-ray medical technology, as these materials can absorb energy from various types of radioactive emissions. Specifically, some radioactive elements emit fast gamma rays such as iodine-125, but the most popular elements in research emit less-active beta particles such as tritium (3H), carbon-14 (14C), phosphorus-32 (32P), and sulfur-35 (35S). The final crucial element involved in the chemistry of phosphor absorption is a trace amount of the divalent cation europium (Eu2+) coated onto the surface layer, which acts the “luminescent center” since it is the actual material that emits light. 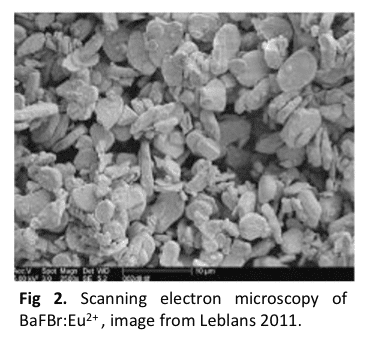 There are a few proposed models for the exact mechanism of PSL (Leblans 2011). The basic theory rests on the fact that radiation generates electron carriers that are trapped within defects in the phosphor crystal lattice. Possibly the most popular model, as it’s taught by the GE technicians of the Typhoon scanning machine, begins with ionizing radiation hitting a Eu2+ molecule. Specifically, the europium does not absorb anything, in fact the radiation actually steals an electron, making Eu3+ (Fig 2, Fig 3). The electron released interacts with bromine creating BaFBr–:Eu3+, which is a second, higher-energy stable state of the compound. These trapped electrons are sensitive to light so the exposure process takes place in a sealed cassette. To release the energy and quantify the amount of original radiation, the phosphor molecules are then hit with a red laser, to create the excited BaFBr:Eu2+* state. As the lattice relaxes to its original ground state, the europium releases a photon in the form of blue-violet 400 nm light. The light is captured by a photomultiplier tube which amplifies and converts the light into an electronic signal. The screen is then simply “blanked” by white light and can be reused thousands of times. 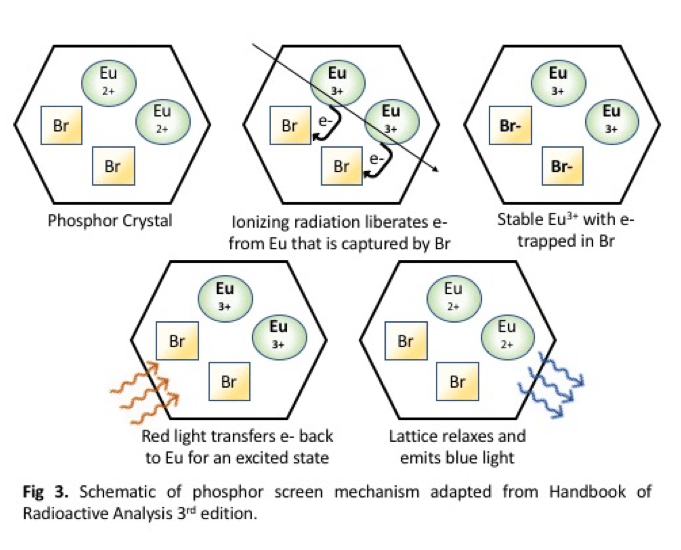 To my surprise, the mysterious phosphor screen works like an old-school television, where electron beams activate thin layers of phosphor particles within a vacuum tube. The difference lies with chemistry of the phosphor screen particles to absorb the energy in a stable manner and store it. The more you know, the more similar everything becomes.