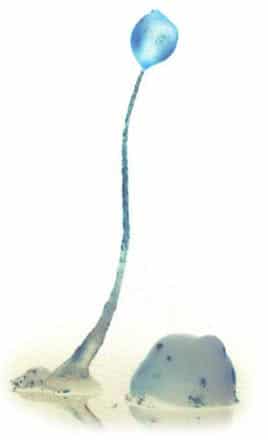 As noted in the previous post on Model Organisms, Dictyostelium discoideum is a popular model for studying fundamental aspects of cell-cell communication and chemotaxis. This is a soil-living social amoeba grows as separate, independent cells that interact to form multicellular structures when challenged by adverse conditions such as starvation. Up to 100,000 cells signal each other by releasing the chemoattractant cAMP and aggregate together by chemotaxis to form a mound that is surrounded by an extracellular matrix. This mechanism for generating a multicellular organism differs radically from the early steps of metazoan embryogenesis. However, subsequent processes depend on cell-cell communication in both Dictyostelium and metazoans. Many of the underlying molecular and cellular processes appear to have arisen in primitive precursor cells and to have remained fundamentally unchanged throughout evolution. Basic processes of development such as differential cell sorting, pattern formation, stimulus-induced gene expression, and cell-type regulation are common to Dictyostelium and metazoans.

One of the incredible strengths of this model system is the capacity to track the dynamic behaviors of individual cells, yet still can function as a collective of cells. This makes Dicty the best of both worlds – an easily studied single cell organism for one half of its life cycle, and a multicellular creature during the other half, such that it can inform us on the fundamental principles of cell behavior.

Another strength is the accessibility of phenotypes and biochemistry, since the simplicity of the life cycle facilitates mutant selection. The growth and developmental stages are completely independent, and switching between the two states is achieved by removing nutrients. Many mutations can be screened by clonally plating cells on bacterial lawns. As the amoebae grow, they ingest the bacteria and form a plaque. The cells within the plaque starve and enter the developmental program. Aberrant phenotypes can be scored by visual inspection of the plaques. Since the early stages of development are readily reversible, mutants can be selected and then propagated by returning them to nutrients.

It also helps that the Dicty genome has been sequenced (Eichinger et al., 2005).