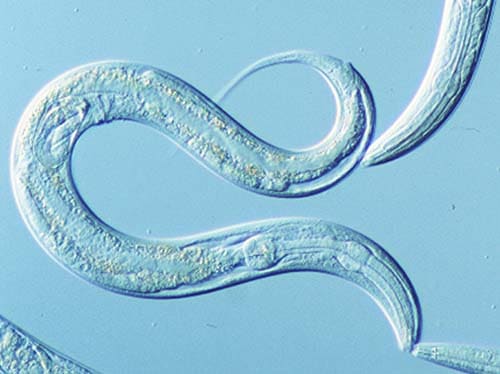 Continuing with the recent theme on model organisms, there is the nematode (roundworm) Caenorhabditis elegans. This organisms is particularly useful owing to the fact that it has very defined development patterns involving fixed numbers of cells, and it can be rapidly assayed for abnormalities. Further, strains are cheap to breed and can be frozen. When subsequently thawed they remain viable, allowing long-term storage. Because the complete cell lineage of the species has been determined, C. elegans has proven especially useful for studying cellular differentiation.

C. elegans is unsegmented, vermiform, bilaterally symmetrical, with a cuticle integument, four main epidermal cords and a fluid-filled pseudocoelomate cavity. Members of the species have many of the same organ systems as other animals.

From a research perspective, C. elegans has the advantage of being a multicellular eukaryotic organism that is simple enough to be studied in great detail. The developmental fate of every single somatic cell (959 in the adult hermaphrodite; 1031 in the adult male) has been mapped out. These patterns of cell lineage are largely invariant between individuals, in contrast to mammals where cell development from the embryo is more largely dependent on cellular cues. In both sexes, a large number of additional cells (131 in the hermaphrodite, most of which would otherwise become neurons), are eliminated by programmed cell death (apoptosis). C. elegans is also among the simplest organisms with a nervous system. It is also relatively easy to disrupt individual genes in this roundworm, and it was the first multicellular organism to have its genome completely sequenced.

For a large repository of videos of the developing roundworm, click here.

For experiments, knowledge of the developmental fate of every single cell is extremely advantageous. Unknown and uncontrollable experimental variables are greatly minimized, while the small size and easy manipulation of the genome enable researchers to address fundamental questions of biology. (By now, you may notice a trend – simplicity and ease of manipulation are vital factors in choosing what organisms to uses as models of biology)

More resources for studying C. elegans can be found at the following sites: