Fluorescence is one of the most important and useful tools in a biologist’s toolbox. In biology, nearly every field, from physiology to immunology, uses fluorescent molecules (aka fluorophores) to detect proteins. However, the specific science behind how fluorescence works can be confusing or overlooked.

Have no fear! In this article, we break down key points of fluorescence so you can be the expert you always wanted to be.

What Exactly IS Fluorescence? 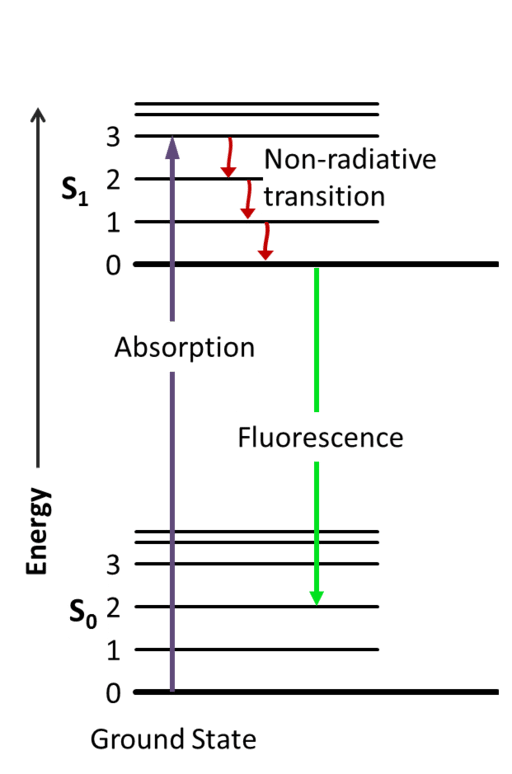 Flashback to General Chemistry: visible light exists as elementary particles called photons. These particles are essential packets of energy that when absorbed, will propel or “excite” the light-absorbing molecule into a higher energy level. In the case of fluorescence, fluorophores absorb visible light, usually provided from an incandescent lamp or laser, leading to an an excited electronic singlet state (S1) of the molecule.

As we all know, the goal of an atom is to be in the lowest energy state as possible. So when a fluorophore is excited to a higher electronic state, it immediately wants to begin releasing energy; thus, this excited state, known as the excited-state lifetime, does not last for very long (typically 1–10 nanoseconds). Even so, this step in the process is incredibly important, since it is during this time that the energy from S1 begins to decay toward a “relaxed” singlet excited state from which fluorescence emission originates.

And finally, we’re ready for some fluorescence! Beginning at the “relaxed” excited state, the high energy photon decays quickly toward the ground state and emits this excess energy as a photon of light. This transition of energy is what we know as fluorescence. Interestingly, because some of that energy was already released during the excited-state lifetime, the energy of the now fluorescing photon is lower than the energy of the excitation photon. Thus, the energy released during fluorescence will always be of a longer wavelength than that needed for excitation.

How Does Flow Cytometry Take Advantage of Fluorescent Molecules?

We covered the concept and basics of flow cytometry in prior articles and a webinar, so go back and freshen up on the topic if you need to.

When dealing with fluorescent molecules, we need to pay special attention to the difference between the excitation and emission wavelengths or energy, otherwise known as the Stokes shift. The significance of the Stokes shift lies in its simplicity: it allows us to determine if the wavelength of emitted light and wavelength of excitation light is large enough to reliably tell them apart. As the readout of flow cytometry is based solely on fluorescence, it is essential to be aware of this parameter, or risk generating unreliable, poop emoji data.

Moreover, it is extremely important to keep track of the absorption spectrum and emission spectrum for each fluorophore, and how various lasers may interact with the fluorophore in question. For instance, in a flow cytometry machine the argon ion laser emits 488-nm of light, which excites the fluorophore, fluorescein isothiocyanate (FITC). Because the 488-nm is very close to the FITC absorption maximum, excitation results in high FITC emission. However, if FITC is excited by another wavelength from a different laser within its absorption spectrum, it emits light in the same spectrum, but it is not of the same intensity.

And there you have it: a quick introduction/reminder of fluorescence and how it relates to fluorescent molecules utilized in flow cytometry. Questions? Comments? Let us know!

Listen to Nobel Laureate Martin Chalfie on The Microscopists podcast and discover more about his involvement in the discovery and development of GFP:

Share this to your network:
TwitterFacebookLinkedIn
Written by Kristen Haberthur
Image Credit: D.L.