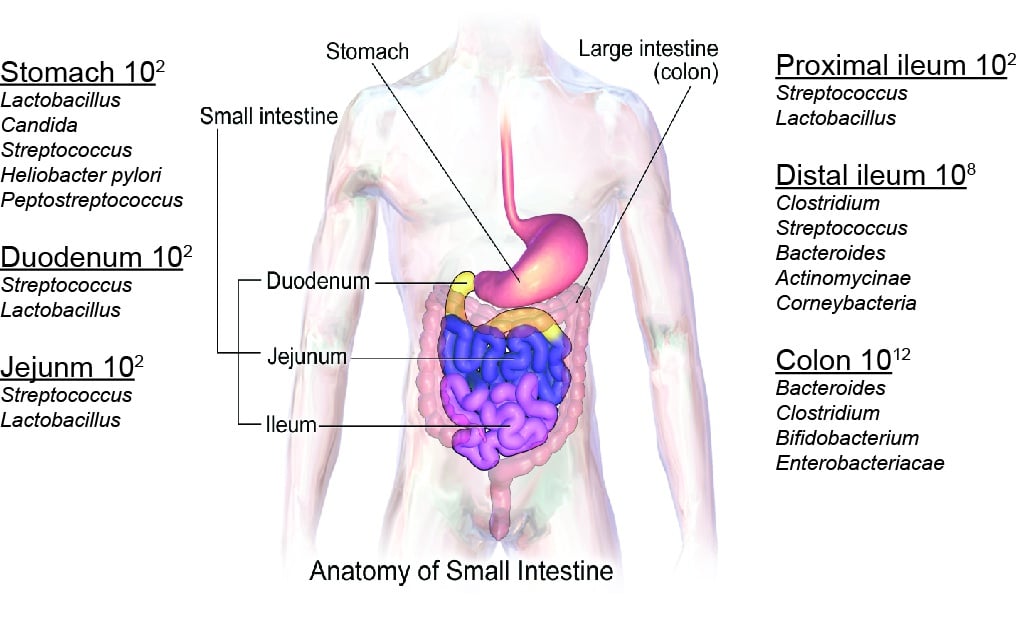 If you google “What’s hot in medicine,” you will see the word “gut microbiome” popping up in every corner of the webpage. Microbes keep your body functioning in balance – from digesting complex carbohydrates to fighting off foreign pathogens and educating your immune system. They have even been linked to maintaining brain function as well. So how do they do it?

Much research efforts are being put into studying the gut microbiome right now because we realize it is super important. In both the inflammatory bowel diseases (IBDs) and in Clostridium difficile infections, the right mirobiome plays a crucial role in recovery. This article will focus on the gut because there are some awesome examples of modern medicine at work. Let’s first take a brief overview of the microbiome in the gut.

The gut or, to be proper, the gastrointestinal tract (GI tract), can be subdivided into different regions (Figure 1). As the food we eat passes through each region along the GI tract, conditions change. Take pH as an example. The mouth and the esophagus are slightly alkaline at pH 7.5-8.0. Then, pH decreases drastically to 3.0 to 4.0 in the stomach. While some bacteria can exist in the stomach (e.g. stomach ulcer causing Helicobacter pylori), most bacteria don’t have the protective mechanisms necessary for survival. Interestingly, the number and diversity of microbes increases dramatically (from 102 to 108) as you progress through the small intestine (SI) to the colon. In the colon, the number of bacteria could hit the order of 1012!

The reason the bacteria population increases the further you proceed down, is because the environment in small intestine can be really harsh for bacteria, usually full of digestive enzymes (2). You can see this and the predominant bacterial genus in the GI tract in Figure 1. Keep in mind that under each genus there are many different species. For example colon microbiota contains 30 different genera and 500 different species (3)! This diversity reflects different roles that microbes carry out. And be happy that these microbes are, for the most part, are good guys.

Figure 1. GI tract and predominant microbiota. Adapted from Blausen.com staff. “Blausen gallery 2014“. Wikiversity journal of Medicine.
Keeping bacteria as friendly neighbors is a tricky business because depending on the situation, good bacteria can sometimes do bad things. To create a barrier against bacteria, the SI and the colon have a thick layer of mucus produced by specialized epithelial cells called goblet cells. The mucus layer consists of two layers as shown in Figure 2.

What Do the Good Guys Do?

The good guys are also known as commensal bacteria, because they have developed a beneficial relationship with us through millions of evolution. First they can breakdown certain food components that humans are unable to metabolize, such as complex carbohydrates, therefore providing nutrients that are otherwise unavailable to humans. In return, they colonize the gut and block pathogenic bacteria from making us sick, adding to the protection offered by the mucus barrier and antimicrobial agents. They also play important roles in regulating immune functions. For example, one of the key players called Bacteroides thetaiotamicron (BT) is important in doing all three of things that I just mentioned. BT lives harmoniously with all the other bacteria in your gut and each of them occupies a specific niche, forming a symbiotic relationship with its host.

For example, BT is good at following things (4)

As if that wasn’t enough, BT can also break down starch into a form absorbable by us. Next time you have a large baked potato, you can thank BT for breaking it down (5).

The diversity and abundance of microbes in our gut is constantly changing dependent on diet and lifestyle (6). Diversity reflects the variety of different species of microbes, abundance reflects the numbers of microbes. Bacterial diversity is an important indicator of your personal health. In disease states, the composition of microbes shifts. For example, in IBD Crohn’s disease, there is a dramatic change in the overall diversity of the microbiome. Biopsies from the terminal ileum and rectum showed a change in proportions of the different bacteria and this is accompanied by a loss of basic biosynthetic processes because there aren’t as many good bacteria such as your friend BT (7). Loss of one species can have a domino effect on the entire microbial community. Losing the ability to digest complex food sources is detrimental to human health and can cascade into affecting the microbial community. For example, loss of the bacterial species that produces short chain fatty acids (SCFAs), affects not only the host but also other gut bacteria that use SCFA’s as a carbon source. These bacteria are then unable to survive and in turn unable support their neighbors.

So, how can you stop this type of catastrophic cascade? Let’s say you take a course of antibiotics and you end up developing an IBD because the antibiotic might have wiped out a whole bunch of your good bacterial colonies. Couldn’t you just eat a bunch of probiotics (probiotics are basically the good commensal bacteria) and replace them? Sadly, it’s not that easy. Finding the right combination of bacteria is difficult and getting them to stay in the gut is another issue. So far, there has been limited success for IBD diseases (8).

There is, however, one awesome success story with the use of microbial replacement and this involves the use of fecal microbial transplantation (FMT) in the treatment of Clostridium difficile infections. This nasty bug takes advantage of the depletion of resident microbes in the gut after a course of antibiotic treatments. It can cause diarrhea and in more severe cases pseudomembranous colitis via release of its toxin. Treatment with antibiotics is the conventional therapy but often results in relapses. After 3 relapses, the infection is almost impossible to treat due to antibiotic resistance and becomes fatal. In comes super poo! Ok, scientifically, FMT involves the careful selection of donors (often a family member) for health and absence of viruses such as HIV and hepatitis, followed by colonoscopy or sigmoidoscopy to transfer the stool solution to the patient (8). The cure rate for FMT is 91-93% after one treatment and 98% with a second treatment, which is absolutely phenomenal; more and more people are overcoming the ick factor for treatment.

You don’t need wait until you are ill to take care of your gut friends. Maintaining a balanced and healthy diet is super important. Yes, you guessed it! Lots of greens will help maintain the diversity of bacteria. Staying away from antibiotics as much as possible and eating probiotics in products such as kefir and culture-rich yogurt is also beneficial. Go BUGS!