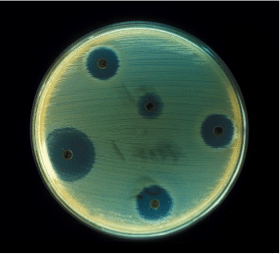 The world as we know it couldn’t exist without microbes. It is estimated that there are tens of trillions of bacteria living just in and on humans. (Ewww?) One trillion has 12 zeros. To put that in perspective, the entire human population on earth is only 7.3 billion with a measly 9 zeros. With that many microbes on you, it would be naïve to think microbes do not play a role in your day-to-day life and health. But just what do they do? In this article, Part 1 of a 4 part series, I will cover antibiotics and vaccines.

Normally when people talk about microbes, they talk about the bad guys (germs!) that make us feel sick. But microbes are not without their uses. Yes, some are deadly, and some can cause hygienic problems such as bad breath and body odors. However, many microbes prevent disease and benefit the body. Such is the case with our food digestion, where microbes provide animals (like us) with metabolic pathways we would otherwise lack.

Moreover, microbes have been harnessed to produce many clinically important compounds such as vaccines and antibiotics. So microbes are nothing to sneeze at. Then there is the newest microbe trend in medicine: the use of probiotics to encourage or discourage select microbe populations living within us. And when we take a moment to consider the fruitful history of microbes in medicine, it is easy to see why we must make every effort to understanding the biology of microbes. Our next great therapeutic or technological advance may very well involve a microbe or its product.

Now let’s take a look at a two useful microbial products in this article: Antibiotics and Vaccines

Antibiotics are microbial poisons made paradoxically by microbes. Antibiotics arise as a result of resource competition. To minimize competition some microbes produce antibiotics to restrict the growth of other microbes. Microbes that makes antibiotic are not susceptible to them – they have a Kevlar body suit of sorts. Let’s look at two examples of antibiotics that you are probably familiar with that are produced by fungi and bacteria.

Penicillin is an antibiotic made by a fungus. Remember Alexander Fleming’s famous experiment in 1929? Oh, you don’t? Well, Fleming had a plate of Staphylococcus aureus that was contaminated by some fungus. This fungus was later identified as Penicillium notatum. He observed that around the fungal colony there was a clear zone, (i.e. a zone free of bacterial growth), suggesting that the fungus produced a substance that prevented S. aureus from growing (Figure 1). The substance turned out to be an antibiotic that works by inhibiting the bacterial cell wall enzyme, D-alanine carboxypeptidase. This enzyme catalyzes the formation of bonds between peptidoglycan polymers in the bacterial cell wall. If this enzyme cannot function, the cell wall is weakened, resulting in bacterial death. The substance was later named penicillin and heralded the birth of the golden age of antibiotics. The name penicillin comes from the latin penicillum for “painter’s brush”, apparently because the edges of the fungal growth looked like a paintbrush!

The discovery that a fungus could naturally produce a bug-killing substance led to the idea that other microbes might do the same. Actinomycetes (also known as Actinobacteria) is a model organism of antibiotic production. Living predominantly in the soil, Actinomycetes are exposed to many different environmental challenges, such as competing with other bacteria for resources. Therefore, this little bacterium came up with a whole bunch of weapons such as tetracyclin, streptomycin and daptomycin. Think of it like a sort of weird hunger games where the victor not only removes all the competitors, but is able to multiply in doing so. Katniss Everdeen x 1000 and more!

While the use of micro-organisms as synthetic factories is growing, there are no bacteria or fungi currently used to produce antibiotics. Part of the issue is that the pathways to antibiotic production are highly complex and difficult to engineer in a way that will give a high product yield that can also be tolerated by the microbe producing it. Even with E. coli, one of the most well studied bacteria, scientists have not been able to adapt it for antibiotic production. This is such a problem that there is even a fun video on the European initiative for the use of synthetic biology to find new peptide antibiotics here.

Vaccines Made of Entire Pathogen

While antibiotics are used to treat microbial infections, vaccines are used to prevent infections. Vaccines can work by using parts of the pathogen or a whole inactive pathogen to stimulate the immune system. When our body meets a live pathogen during an infection, the pathogen is recognized by a primed immune system and can swiftly mount a response to eradicate the infection. There are many different types of vaccine and the topic is a broad one (and I’m not even going to get to adjuvants!), with new types of vaccines being researched as I write. For example, the rise of Zika virus infections around the globe and what it might do to the fetus in a pregnant woman has put global health agencies and governments on high alert to push for vaccine development. I will highlight some examples on the different types of vaccines, which represents only a small fraction of vaccines available.

The measles, mumps and rubella (MMR) vaccine consists of all three live attenuated viruses mentioned above. What is attenuated you ask? It means that the virus (or bacteria) grows well in laboratory settings and can generate an immune response but it does not make you as sick compared to the original agent. Two other examples of live attenuated vaccines are Poliovirus vaccine that prevents poliomyelitis and Bacillus Calmette-Guérin (BCG) vaccine that prevents tuberculosis caused by Mycobacterium tuberculosis.

Consisting of dead bacteria or viruses are safer than live attenuated vaccines but are weaker at boosting the immune systems and several rounds of vaccination are needed. Examples of inactivated vaccines include the Bordetella pertussis vaccine that prevents whooping cough and the influenza vaccine that needs to be given annually to keep up with the rapidly mutating nature of the different types of influenza virus.

Vaccines Made of Microbial Parts

Some diseases such as tetanus and diphtheria are mainly the result of toxins produced by the micro-organisms. Tetanus, an awful condition caused by Clostridium tetani that enters your body if you have an injury, is the direct result of the tetanus toxin released by the bacteria. Tetanus toxin, inactivated by formalin, is the vaccine given to protect against tetanus. The tetnus toxoid vaccine is produced by growing the bacteria in culture and harvesting the toxin.

Consist of other bits (usually proteins) of a microbe. Determining which part of the microbe will generate the best immune response can be tricky but some have managed it. An example of a subunit vaccine is the one called acellular Pertussis vaccine against whooping cough. To confuse matters, this in fact consists of the Pertussis toxin together with filamentous haemagglutinin, fimbrial antigens and pertactin which are other microbial immunogenic proteins – quite a mix!

These are the newest types of vaccines and are not yet approved for use in the clinic. Here, DNA encoding parts of bacteria or viruses is given to the patient. The plasmid DNA will be taken up by the patient’s own cells and displayed on the cell surface to generate an immune response. The idea is to stimulate your cells to manufacture and deliver the foreign antigen to alert the immune system! And it gets better. Instead of just using plasmid DNA itself, the DNA can also be packaged within a virus or a bacterium that serves as a carrier to deliver the DNA into cells! These are called vector vaccines where the bacterial or viral vectors are the “mailman”. The advantage of a DNA vaccine is that it can be rapidly modified to keep up with a mutating virus like the human immunodeficiency virus (HIV).

So here, I have told you about two main ways of destroying disease-causing microbes: by using microbial poisons such as antibiotics that are produced by microbes themselves, and by using vaccines to prime the body’s immune system to be ready for an infection. In the next installment, “The World of Microbes, Part 2” I will talk about “the good bacteria in your gut.” That’s right, it time to learn about your gut friends that fight pathogens, keep your immune system up to snuff and help you digest food.