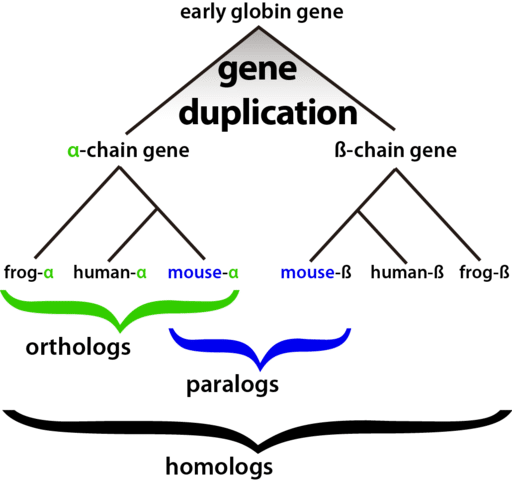 While reading different papers and during different discussions in the classroom (and several online forums), I’ve noticed that there exists some ambiguity about the different terms relating to homology. I’ll try to break them down here, with significant help from Genome Biology.

When in doubt, say Homolog!

If two genes are evolutionarily related, they are said to be homologous. So all the kinds of genes mentioned in this article are homologs. It’s the warm, cozy blanket term for orthologs and paralogs.

For example, take the armadillo gene from Drosophila. It’s called β-catenin in other mammals, and yet, they are homologs. The humble fruit fly has numerous similar examples like the bazooka gene (which is called PAR-3 in humans). When you have some time, check out all the quirky names!

A gene that has diverged as a result of a speciation event is called an ortholog. Orthologs will generally retain the same function after the speciation event—this is how ‘transfer of annotation’ is possible.  But they may not have the same name.

The unusually named ‘lame duck’ protein is simply called the ‘GLIS family zinc fingers’ in humans. *sigh*  Another funny example is that of the ‘Gengis Khan’ gene in Drosophila. Its homolog in humans is called ‘Serine/threonine-protein kinase MRCK alpha.’

If two genes diverge as a result of a gene duplication event, they are called paralogs. Generally, paralogs will take on a different-but-related gene function, while their cousins—the orthologs—will retain the same function through the course of evolution.

In the fruitfly, a paralog for the ‘lame duck’ is the ‘sugarbabe.’ (Big upgrade!)

Here is an image that beautifully explains these terms through example of the globin gene:

Now you don’t have to be Homologuephobic anymore! (It’s a real thing!)

Share this to your network:
TwitterFacebookLinkedIn
Written by Shashwat Deepali Nagar